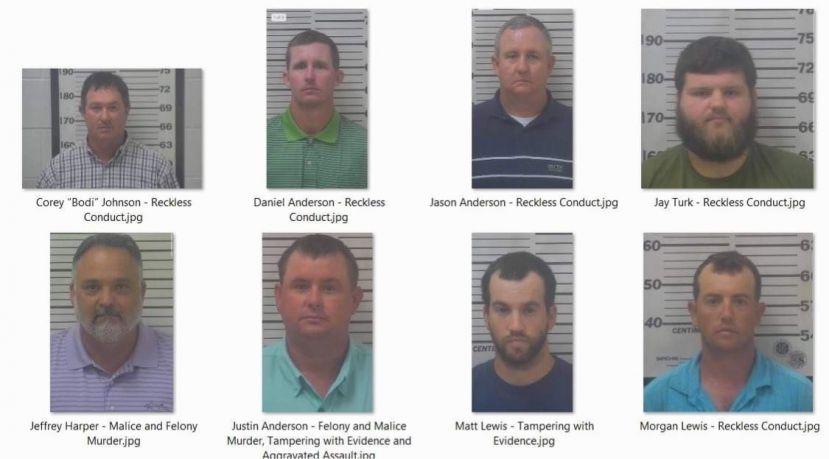 A Coffee County Grand Jury indicted eight individuals in connection with the death of Vann Brown, 39, which occurred at a residence on Woodrow Harper Road near Ambrose on Jan. 1, 2020.

Brown was attending a wedding reception at the home of Jeffery Harper and family when an altercation took place after midnight. During the altercation, Brown lost his life. Details of the incident have not been officially released by authorities. However, according to witnesses, Brown had become unruly at the party. He was asked to leave multiple times but refused. As a result, an altercation took place. The cause of death was attributed to asphyxiation resulting from multiple blunt force trauma. According to the Grand Jury indictment, Jeffery Harper held Brown down and choked him while Justin Anderson hit Brown in the head with a baton multiple times.

Tuesday, Aug. 18, 2020, the Grand Jury wrapped its hearing on Brown’s death. Wednesday, Aug. 19, 2020, the indictments were opened and released. Jeffery Harper was charged with one count of felony murder and one count of malice murder.  The indictment states that Harper “did cause the death of Warren Vann Brown . . . by using his hands and body . . . to impede the flow of blood and oxygen to the said Warren Vann Brown . . .”

Justin Anderson was charged with one count of felony murder, malice murder, aggravated assault, and tampering with evidence. Regarding the two counts of murder, the indictment says essentially the same thing as Harper’s. On count three, aggravated assault, the indictment states that Justin Anderson “did make an assault upon the person of Warren Vann Brown with a baton . . . by hitting him in the head.” The indictment also states that Justin Anderson “did knowingly conceal physical evidence, to wit: baton . . . with intent to obstruct the prosecution of Justin Joe Anderson.”

Matthew Lewis was charged with one count of tampering with evidence. According to the indictment, Lewis’s charges stem from his attempt to conceal the baton Justin Anderson allegedly used to strike Brown.

The charges for Justin Anderson, Harper, and Matthew Lewis are all felonies. Five individuals were charged with reckless conduct, which is a misdemeanor. Those individuals are Daniel Anderson, Jason Anderson, Jay Turk, Morgan Lewis, and Corey Johnson. According to the indictment, they were so charged because their actions that night “did unlawfully endanger the bodily safety of Warren Vann Brown by consciously disregarding a substantial and unjustifiable risk that his act of restraining him in such a manner as he was unable to defend himself . . .”

All eight were arrested and jailed on Wednesday. Justin Anderson and Harper remain incarcerated in the Coffee County Jail. The other six posted bond and were released.