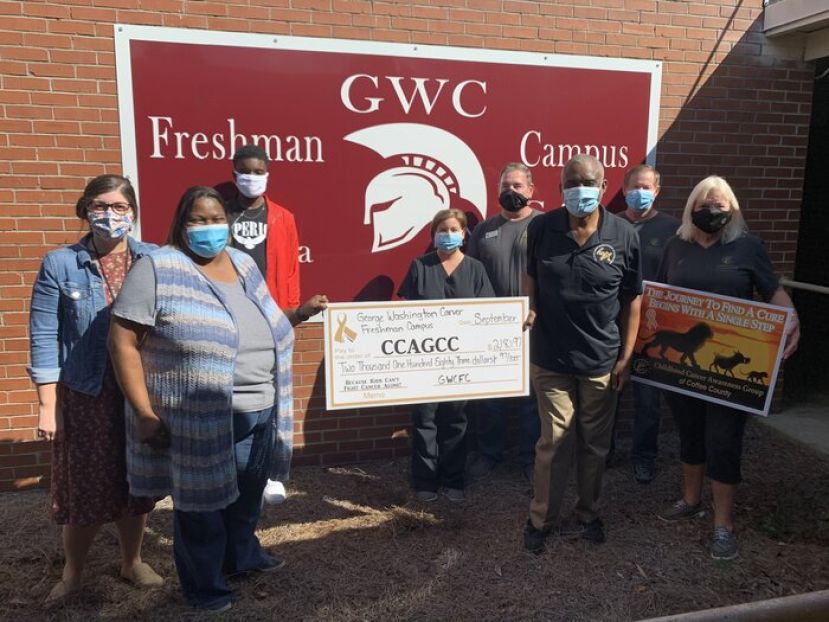 Chris Papierz, a history teacher at GWCFC and a member of CCAGCC, was the contact person for fundraising at the school and headed up the sausage dog sale. Brandy Dougals, a teacher at GWCFC, helped spread the word to the community for donations for the sausage dog sale. Several businesses made donations or provided discounts to help offset costs, including Harvey's on Peterson, Williams Institutional Foods, McKinnon Meats, and Bimbo Bakery. Not only that, but a Wal-Mart Distribution truck donation provided the school with coolers and containers for the sausage dog sale. Many people at the school helped with the sale, including Student Council members and the school nurse, Jessica Bass, who also collected orders for childhood cancer awareness T-shirts.

Several groups on campus contributed to the fundraising efforts as well. The Media Center at GWCFC sold cookies, bottled waters, coffee, and hot chocolate to students and staff, and by the end of September they raised a little over $400. The P.E department made a $500 donation and FFA also contributed to the total. The school hosted a mini-incentive day for the students, and the PBIS committee donated the profits from the concessions sold that day. The total amount GWCFC donated to childhood cancer awareness was $2,183.97! GWCFC is thankful for everyone who helped donate and helped out with the childhood cancer awareness fundraisers!

More in this category: « SGSC announces its reopening plan for the Spring 2021 semester CRMC to host blood drive on October 27 »
Login to post comments