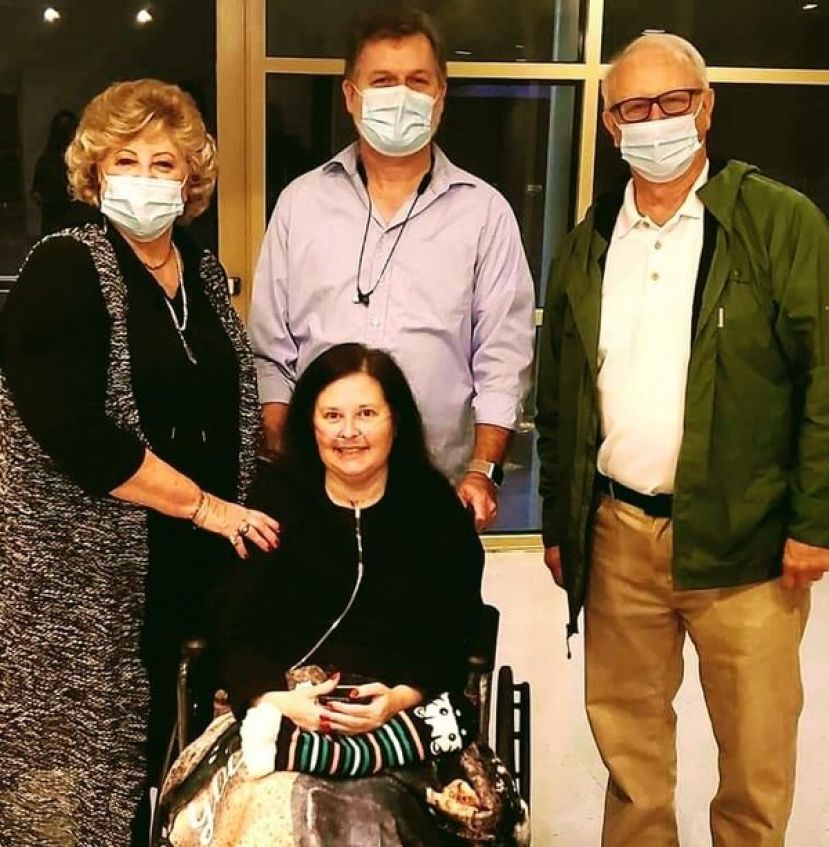 Photo courtesy of Faye Wilcox Ray's Facebook page Lisa Ray Martin poses with her parents, Howard and Faye Ray, and her husband, Jeff, the day before she was released from Satilla Memorial Health following a long battle with COVID-19 that included 59 days on a ventilator. She and Jeff live in Blackshear with their children.

On New Year’s Eve, Lisa Ray Martin, a Douglas native, went home from the hospital for the first time since Sept. 27, 2020, when she was admitted for COVID-19. Now living in Blackshear with her husband, Jeff, and their children, she reported to the Satilla Memorial Health emergency room in poor health after being diagnosed with COVID-19. What came next was a three-month nightmare that Lisa’s family wasn’t sure she would survive.

Lisa’s family had gathered at the hospital to say their final goodbyes. She was hours away from being taken off a ventilator, to which she had been attached for 59 days. Doing so meant almost certain death. Lisa had fought valiantly but it appeared as though her battle was over.

But Lisa had other plans. Below is what staff from Satilla Memorial Health posted on its Facebook page when she was released from the hospital on Dec. 31, 2020. Lisa’s story has since been picked up by People Magazine and Good Morning America. Here is a short recap of Lisa’s fight:

“New Year’s Eve has even more significance this year for miracle patient Lisa Martin and her husband, Jeff. Lisa is going home for the first time since Sept. 27 when she was admitted to the Memorial Satilla Health ER with complications from COVID-19. Her amazing journey includes 59 days on a ventilator, 40 days in an induced coma and surviving a frontal lobe stroke. On Oct. 20, Lisa was comatose, her eyes fixed. The hospital called in her family to say goodbye. They decided to give it 11 days before making a decision about removing her from the ventilator that was breathing for her. But God had other plans. On the eleventh day, Lisa broke through the sedatives and began tracking Jeff with her eyes and she moved her hand. After that, she was transferred to two other hospitals (including our sister facility, Memorial Health in Savannah) to progress her care before coming to Memorial Satilla Rehabilitation on Dec. 14 for her final rehabilitation days before going home. We will be sharing a more in-depth version of Lisa’s story. Happy New Year!”