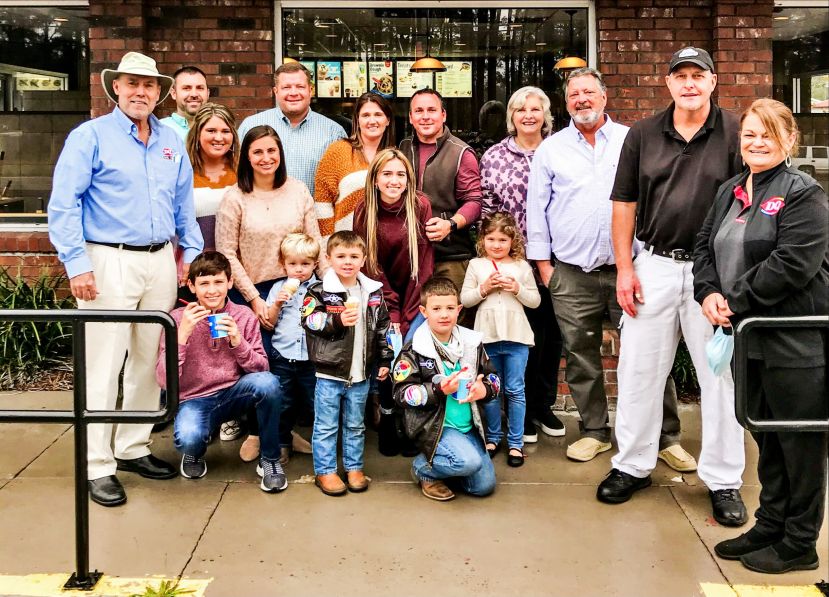 Submitted photo Sonny Lyon (far left) stand with his family along with Tammy and Johnny Spell, and Craig and Lisa Adams, in front of the Douglas Dairy Queen. Lyon has purchased the Dairy Queen from the Adams/Spell families, thus beginning a new chapter in the 72-year history of the restaurant.

The Douglas Dairy Queen, a historic landmark in Douglas and one of the most recognizable businesses in Coffee County, is under new ownership. Restauranteur Sonny Lyon and his family have purchased the Dairy Queen from the Adams family, who have owned and operated the restaurant for nearly 60 years. Lyon Management released the following statement regarding the sale:

“Sonny Lyon and family would like to extend our sincere gratitude and appreciation to the Adams family for allowing us the opportunity to continue the legacy of the Douglas Dairy Queen. The Adams family have built this iconic brand to be more than just another restaurant in Douglas over the last 67 years, and we are very excited to be able to keep the Douglas Dairy Queen a locally owned and operated business. Our family is looking forward to continually serving this wonderful community for generations to come.  We would like to thank everyone for their support of the Adams family and our own during this transition. “

What follows below is a story titled “The Legacy of the Douglas Dairy Queen,” which Lisa Adams and her husband, Craig, posted recently on Lisa’s Facebook page. The story traces the history of the Dairy Queen from its humble beginnings in 1949 to present day. It include some background information regarding the sale and how/why the Adams family arrived at this decision.

A few years later, Mr. Scruggs sold the Douglas Dairy Queen to Olan and Mattie Bell Adams. They operated the store until 1954, when it was purchased by Marvin and Delsa Gaskin. Local residents enjoyed the tasty milkshakes, sundaes and ice cream cones with “a curl on top”.

In 1963, Mr. Gaskin built an addition on the side of the building called “the Brazier”. Hamburgers, hot dogs, Bar-B-Que and French fries were added to the menu. Upon the death of Marvin Gaskin in 1964, J.C. and June Adams became co-owners with Delsa Gaskin. J.C. managed the day-to-day operation of the business along with the help of his wife June and family, as well as his sister Grace Harrell and some of her family.

In 1967, the store got a brand new look with a bright red roof added to the original building. Up until this time, the Dairy Queen only had walk-up service with no interior dining. The year 1975 brought an exciting change tothe Douglas Dairy Queen. A new, modern structure was built directly behind the original building, complete with a red roof and an interior dining room. It officially opened in July of 1975. In the early 1980s, Craig Adams (son), Tammy Adams Spell (daughter) and Johnny Spell (son-in-law) began to conduct the day-to-day store operations.

International Dairy Queen Inc. recognized the Dairy Queen of Douglas with many accomplishments and awards over the years regarding sales and customer service. In 1999, the store was presented the “Small Business Award” from the Coffee County Chamber of Commerce.

We attribute the success of our business to the hard work and dedication of our employees. Over the years, we have employed hundreds of high school students, along with our own grandchildren, whom we gladly proclaim as 4th generation Dairy Queen employees. They are Adam Spell, Chase Spell, Ramee Spell Wright, Jeremy Adams and Carter Adams.

Our business would have never been successful without the most important people: the citizens of Coffee County. Over the past 66 years, our family has been privileged to serve the great people of this county and surrounding ones as well. We have gotten to know some of you personally and have made life-long friendships. We have seen many generations come through our doors, and have watched children grow up and bring their own children to our business to enjoy those same tasty treats that they grew to love.

Although bittersweet, we, Craig and Lisa Adams, are retiring from the restaurant business. We want to be transparent; the decision to go through with the sale and change of ownership has been ongoing since October 2020. A family meeting took place between us, Tammy and Johnny Spell, and June, who gave her blessing. With our children and the children of Tammy and Johnny Spell pursuing different career paths, the history of the Adams/Spell family ownership will end here. However, the memories and legacy will be carried on by Sonny Lyon and family. We are confident that we have left our treasured business in excellent and capable hands, and we can’t wait to see what the future holds for the Douglas Dairy Queen. We hope to see you there sometime, whether it be after a big Friday night Trojan win, Sunday night after church or a hot summer day. We love you, Coffee County!