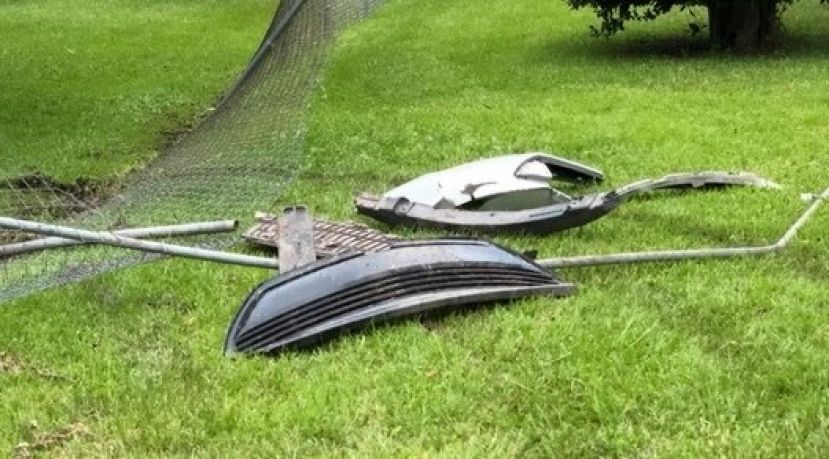 Robert Preston Jr./DouglasNow.com Pictured are a portion of the fence at 905 South Shirley Avenue and parts from a silver Toyota Camry involved in a shooting on Shirley Avenue Thursday night.

According to reports obtained from the Douglas Police Department, officers responded to Coffee Regional Medical Center to investigate the shooting of Damion Harrell, who had been shot in the right wrist while riding in an older model green Toyota. The report states that Harrell said he had been riding with another person who he only knew as Fred when Harrell was shot while sitting in the passenger side of the Toyota. Harrell stated that the heard about five gunshots then realized he was hit in the wrist.

Officers went to the intersection of West Baker Highway and Shirley Avenue when a 911 operator notified the officers that the homeowner at 905 South Shirley Avenue called and reported that a shooting had taken place in front of his house and a vehicle had driven through his yard, tearing down his fence in the process.

The homeowner had a camera on his doorknob. The camera, with a time stamp of 10:17 p.m., showed a dark colored car and a light colored car traveling north on Shirley Avenue. Gunshots could be heard on the video footage. The light colored car then left the road, hit the fence, turn back south, and drive away. Parts from the damaged vehicle lay in the yard. Investigators recovered one bullet and 15 shell casings from the roadway.

A short time later, campus police at South Georgia State College called 911 and reported that there was a silver Toyota car with damage to consistent with what had been reported on Shirley Avenue. The car, a silver Toyota Camry, had significant damage to the front end as well as a flat tire. Officers determined that Heidi Bono owned the car but she had allowed Anthony Hill to drive it. According to Bono, Hill came back to campus and stated that he had wrecked her car. She said she had let him drive her car to “get some snacks.”

Hill, however, told a different story, according to the report. When questioned, Hill said he had left the SGSC campus by himself and was headed to Ocilla to pick up a friend. He stated some people in another vehicle pulled up beside him and told him to go to a park. The report states that Hill ignored them and then the people in the other vehicle started shooting at him. He swerved, crashed into the fence, and then left the scene. According to the report, Hill was scared because he didn’t have a driver’s license. He returned to the college. Hill was charged with leaving the scene of an accident and transported to the Coffee County Jail.

According to the report, officers also questioned Miracle Boykins, Bono’s roommate. She stated that when Hill returned to their dorm room, he was accompanied by an individual named Terry Johnson and she believed that Johnson was with Hill in the vehicle. Boykins also reported that Hill told her the accident happened at the Gate store near Walmart. The report does not say anything about Johnson being apprehended.

Officers searched the Camry and found a substance they believe to be marijuana. ​

During the investigation, other officers located the vehicle Harrell had been riding in when he was shot at an apartment complex in town. That vehicle also had a South Georgia State College parking sticker on it.

This is an ongoing investigation. If anyone has any information regarding this incident, please contact 911 or the Douglas Police Department’s anonymous tip line at (912) 260-3600.