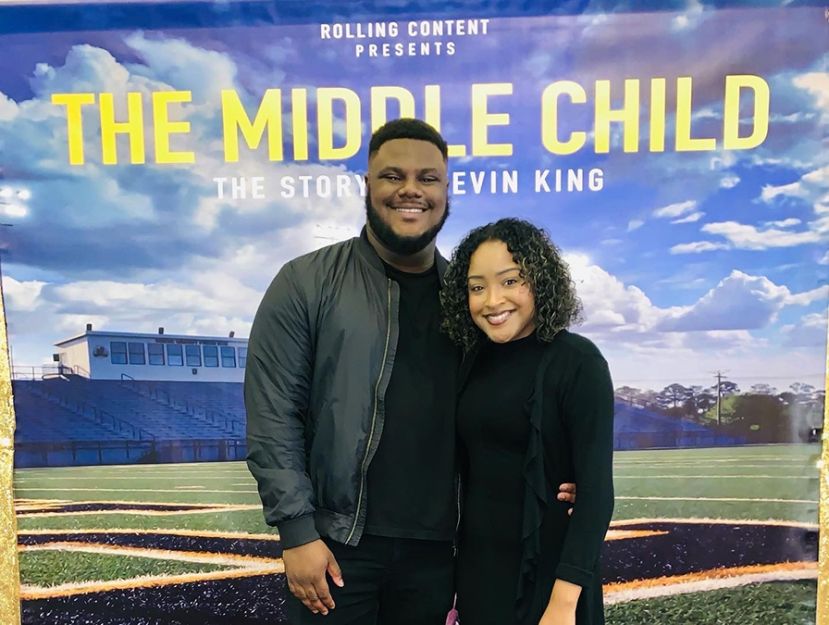 Submitted photo Wiregrass Design and Media Production graduate and now film producer Demiven Knighton is pictured with his wife Jessica at his recent film premiere in his hometown, Moultrie.

With the final click of the movie set clapboard, Wiregrass Georgia Technical College graduate, Demiven Knighton, knew his hard work had paid off.  The Design and Media Production graduate has successfully completed his first film project, “The Middle Child – The Story of Tevin King”, a film based on the high school football career of running back Tevin King, a 2017 Colquitt County High School graduate.

Demiven realized early in life that he wanted to be in the film industry and discovered Wiregrass Tech through a social media ad and enrolled in the Design and Media Production Technology program.

“In my opinion, I believe I have always been creative, but my creativity grew more as I started my program at Wiregrass and learned from my instructor, John Patten.  I was able to learn how to take an idea or story and bring it to life through film production or photography.”  The Design and Media Production Program Coordinator John Patten shared some insight about Knighton as a student, “Demiven was a student who was always willing to go beyond what I asked of my students. He came into the program with a little background in photography and was able to use that to his advantage when it came to setting up camera shots for the projects in class.”

Knighton feels that the college was instrumental in helping him learn the true art of film production.  He added, “Through the various projects we were required to do in the program including participating in the competitive SkillsUSA program, I feel these challenges helped me to be able to produce projects with confidence.”  It was during his time at Wiregrass Tech when Knighton stepped into the role of director.  Patten shared, “He would often take the role of the director and editor during group projects and was very hands-on during the production of their student film. Throughout the video program, students create commercials, public service announcements, short narrative films, and a documentary. When Demiven was enrolled, we were still teaching the broadcast news class, during which students had to create one news package per week that would be included in a newscast at the end of the week. Demiven also competed in the photography competition for SkillsUSA.” The SkillsUSA program hosts local, state, and national competitions for students to showcase their skills learned through hands-on training in the classroom.

The film Knighton produced premiered in his hometown of Moultrie on February 12.  The film showcases the football career and community impact of the former Colquitt High School standout - Tevin King. King would play for Louisiana Tech for several years before having to end his career due to an injury.

Knighton is the CEO of his film production company, Rolling Content, LLC.  His vision includes highlighting overlooked or forgotten stories with his production company.  Follow “Demiven Knighton” on Facebook and Instagram to watch his journey into the Atlanta film industry.

Wiregrass will be hosting Free Application Week March 14-18 for Summer Semester; full-term classes begin May 16 and Summer Express starts May 31.