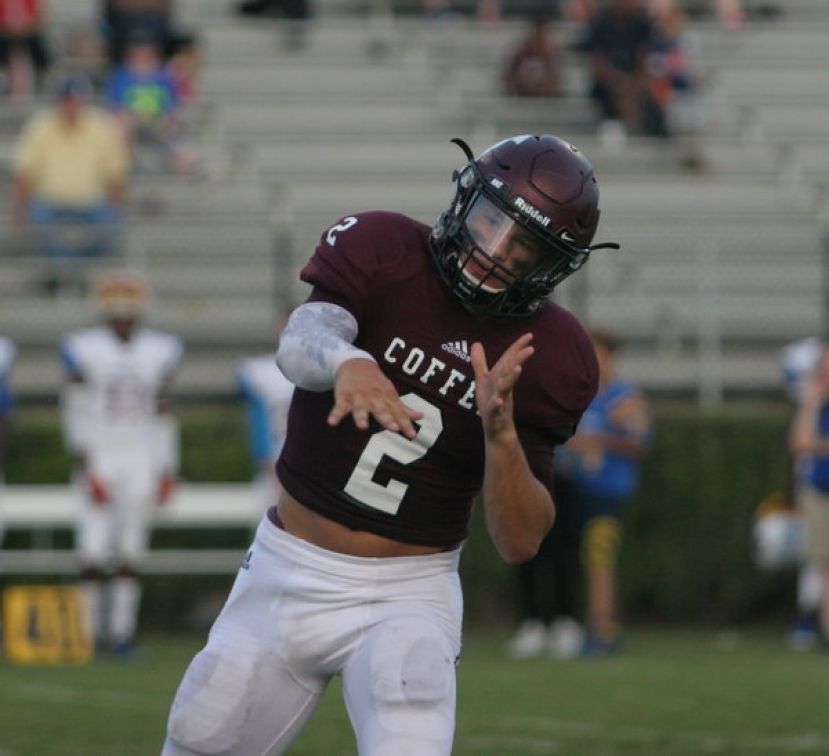 Robert Preston Jr./DouglasNow.com Coffee quarterback Wade Sumner threw three touchdown passes and ran for another score Friday against Tift. However, the Blue Devils still managed to escape with a 33-31 win after a 44-yard field goal with nine seconds left.

I have attended or listened to nearly all of the Coffee Trojans’ football games for many, many years. Friday night’s game between the Trojans and the Tift County Blue Devils is one of the most amazing games I’ve covered. The only game I can think of that tops it came in 2006, when Coffee beat Colquitt 39-37 in triple overtime.

Friday night’s game had all the drama one could ask for in a high school game: two bitter rivals in neighboring communities, a high-octane offense (Tift) against a stifling defense (Coffee), a big lead that never quite seemed big enough, and a contest that wouldn’t be decided until the last second ticked off the clock.

And yet, in the days since the game ended, all anyone is talking about is the officiating.

The common theme this weekend is that the officials stole the game from the Trojans. I am a Trojan fan. I’m as a big of a homer as just about anyone. I love the direction our program has been headed since Robby Pruitt and his staff arrived in Douglas. Our kids and our team are doing things we’ve never done before.

But the officials didn’t cost Coffee the game Friday night. (For a recap of the game, see the story on DouglasNow.com.)

On that last drive, officials threw several penalty flags, much to the Coffee fans’ chagrin. However, before the two teams even got to that point, many of the Trojan faithful felt as though the officiating crew were unfairly penalizing Coffee while letting Tift off the hook. The general consensus among Trojan fans after the game was that we lost because of the officiating.

But that’s not the case.

Officiating in football is at an interesting crossroads. The sport is by nature and history a violent one, a place where in the past almost anything goes between those white lines. In recent years, however, there has been a move to eradicate as much contact as possible. Even casual fans should recognize this.

Officials seem to have a hard time with this trend. The move to protect quarterbacks and kickers, targeting calls, keeping receivers and defenders from blocking each other past a certain point, and inconsistencies among high school, college, and the NFL create problems for fans and refs alike.

The struggles officials are having with the “make football safe” trend are causing inconsistencies in how they call games. You see it all levels. It’s something coaches, players, and fans will have to deal with moving forward. Teams can combat this by doing everything they can within their own control to beat their opponents.

And I maintain that we didn’t do that Friday night. I want to pause here and say that when I write stories about high school athletics, I do my best not to call out players for mistakes. These are teenagers playing a sport they love for free. They’re learning. They’re still developing. They’re doing the best they can under the circumstances. What I’m about to write is not a swipe at any one player.

I don’t think you can blame the officials when you score five touchdowns, miss four extra points, and lose by two points. Our kicking game has been a concern of mine all year long. In today’s game, kicking is a vital component. A kicker who can split the uprights from 40 yards on up is a formidable weapon that gives an offense a ton of options.

Right now, we don’t have those options. The kids know this. The coaches know this. They’re all working as hard as they can to dial in the kicking game. They know what’s at stake. Making at least three more extra points puts the score at 34-30 heading into that final drive and the Blue Devils can’t win with a field goal. That’s not a guarantee that we would have won but it certainly would have changed the dynamic of those last few seconds.

Blaming the officials does at least two other things. First of all, it gives our kids an excuse for the loss. And that gives them less of an incentive to work harder to fix the mistakes that led to the defeat. After all, if it wasn’t their fault, then there’s no reason to put in the time and work necessary to improve. That’s not what sports is about. That’s not what life is about. Or at least it shouldn’t be.

The other thing blaming the officials does is it cheapens the win for the other team. Nowhere in the discussions this weekend has anyone tipped their hat to Tift and said, “You know what, those kids really played hard and played a great game.” Like it or not, that’s exactly what they did. Neither team quit. Both refused to accept defeat. And they battled to the last second for their team, their school, their community.

The 2017 Blue Devils have the two most prolific offensive players in Tift County history in Collier and receiver Rashod Bateman. They are talented and well coached, and they overcame tremendous odds to score on that last possession. It was a miracle win for them, a crushing loss for us. In spite of how badly it hurt to lose, we shouldn’t cheapen the win for the Blue Devils.

Hopefully, we will learn from this game. Maybe this is what we need to finally shore up some of our weaknesses – weaknesses that will come back to haunt us again and again and again if we don’t fix them. And it won’t matter who the officials are.

More in this category: « Know thy neighbor Editorial: Process city plans to use to complete $13.6 million in capital projects bad for entire community »
Login to post comments