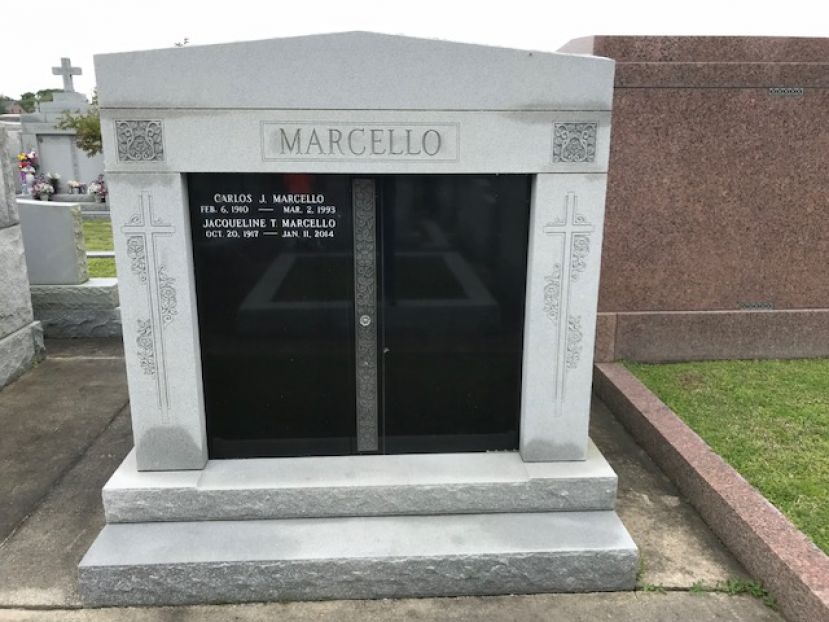 Robert Preston Jr./DouglasNow.com This is the rather subdued gravestone of New Orleans mob boss Carlos Marcello, the man many believe orchestrated the assassination of President John F. Kennedy.

As I stood in front of the non-descript headstone marking the grave of New Orleans mob boss Carlos Marcello, I couldn’t help think to myself, ‘This certainly doesn’t seem to be a fitting memorial for the man who absolutely altered nearly every aspect of political and social life in the United States from 1963 to the present.’

Carlos Marcello wasn’t a nice man, not by a long shot. He opted for a life of crime at an early age and eventually rose to the top of organized crime throughout the Gulf Coast, from western Florida into Texas. He was the absolute godfather of the New Orleans mob, and, as the head of the oldest Sicilian crime family in the country, the nation’s most powerful mobster. During Marcello’s reign, the epicenter of organized crime wasn’t in New York; it was in the South. And Marcello ruled with an iron fist.

While Marcello ran the usual mob rackets throughout his territory, including buying government officials, judges, police, and the occasional juror, it wasn’t his routine illegal activities that made him one of the most significant, but maybe least known, historical figures of the 20th Century.

So what has made Marcello so infamous? It was his involvement, which Marcello admitted to, in the murder of President John F. Kennedy.

President Kennedy’s assassination remains a divisive topic of discussion. The Warren Commission, often considered to be the definitive investigative work on the assassination, was one of six different government investigations in Kennedy’s killing. The other investigative bodies hardly shared the conclusion the Commission came to – that Lee Harvey Oswald was the lone gunman acting on his own volition. In fact, the 1978 United States House of Representatives Select Committee on Assassinations, which investigated the killings of President Kennedy and Dr. Martin Luther King Jr., determined that Kennedy was killed due to a conspiracy. While not naming Marcello as one of Kennedy’s killers, the House Select Committee did determine that Marcello had the motive, means, and opportunity to mastermind the Kennedy assassination.

Authors Thom Hartmann and Lamar Waldron, who has ties to Douglas, have written two exhaustive books on the Kennedy assassination – Ultimate Sacrifice and Legacy of Secrecy. In these two books, they make their case for Marcello, along with Chicago mob boss Sam Giancana and Tampa godfather Santo Trafficante, as the ones who orchestrated Kennedy’s murder.

All three godfathers had drawn the ire of President Kennedy, who had a particular disdain for organized crime. Robert Kennedy, as attorney general, went after the mob under his brother’s directives. Marcello, Trafficante, and Giancana were the primary targets of the Kennedy administration’s war on the Mafia.  At one point, RFK had Marcello deported to Central America for a short time.

The three mobsters hated the Kennedys and determined that the best way to end the investigations into their illegal activities was to kill the president. It was Marcello himself who said if you cut off the tail off a dog, the dog can still bite; if you cut off the head, it can’t hurt anyone anymore.

The task of killing the president was a difficult one, even in a time of relatively lax security measures. During President Kennedy’s administration, he was infamously embroiled with the various crises in Cuba. Kennedy wanted Fidel Castro out. He wasn’t the only one; the Mafia did, too. Waldron and Hartmann outline in their books that the Kennedy brothers, with the help of the CIA, had formulated a plan to kill Castro. The assassination was to take place on Dec. 1, 1963 – after the president’s trips through Chicago, Tampa, and Dallas. An assassin would shoot Castro with a rifle while Castro traveled in an open-air Jeep. The CIA would then set up a Soviet sympathizer to take the fall for the assassination. The new leader of Cuba would be Juan Almeida, the head of the Cuban army (and who, despite his knowledge of the doomed assassination plot, would remain as one of the top Cuban officials into the 2000s).

Many of the CIA operatives and assets who worked on the Castro plot also had ties to the mob. This allowed Marcello, Giancana, and Trafficante to infiltrate the Castro plot and use it to kill Kennedy. Because elements of the Kennedy killing could be traced to the plot to kill Castro, and because Almeida and his family were still in Cuba, officials had to keep everything quiet. Which is what has led to the secrecy, conspiracy theories, and the incorrect conclusions drawn by government officials, authors, scholars, and investigative agencies (such as the Warren Commission).

There were two other attempts on Kennedy’s life prior to Nov. 22, 1963. The first was in Chicago on Nov. 2 of the same year. The Secret Service uncovered the plot and cancelled the president’s motorcade. A few days later, in Tampa, the same thing happened – only this time, there was a story about a possible assassination attempt that ended up in a Tampa newspaper. Waldron and Hartmann found the article and documented it in their books. It was a small story, one that the authors believe escaped detection by the government for decades after the assassination.

Everyone knows what happened on Nov. 22 in Dallas. President Kennedy fell to the bullets fired by more than likely multiple assassins, effectively ending the Kennedys’ investigation into organized crime, allowing Castro to remain in power in Cuba, and setting off a series of cover-ups that extended to the highest levels of government. Marcello and his associates had CIA asset and Soviet sympathizer Lee Harvey Oswalt set up as a patsy. Jack Ruby, a Dallas businessman who was an associate of Marcello’s, had been tasked with finding someone to kill Oswald to keep him quiet. When he couldn’t locate a killer, Ruby, who would have been killed had he not offed Oswald, decided to take care of the task himself.

Marcello ended up serving multiple prison sentences in the years after Kennedy’s assassination. In the mid-1980s, Marcello told his cellmate, an FBI informant named Jack Van Laningham, who was wired at the time, that he arranged the JFK killing. He also said in the same conversation that his biggest regret was not being able to kill Kennedy himself.

At least that’s what Waldron and Hartmann assert.

I tend to side with them. Their books are well documented, well researched, exhaustively cited, and pass the tests for reliability and accuracy. They interviewed a number of people who worked in the Kennedy administration who would have had firsthand knowledge of the inner workings of Kennedy’s government. While not everyone will agree with the conclusions Waldron and Hartmann have drawn, they should at least be given some serious consideration.

Which brings me back to my April visit to New Orleans. We had a little time to kill early on April 8. I looked up Marcello’s final resting place and discovered he lies in the Metairie Cemetery, which was less than five miles from our hotel. I convinced three middle schoolers, who were completely marking out over the prospect of watching Wrestlemania later in the day, to visit the cemetery. We found the cemetery easily enough; finding Marcello’s grave was another matter entirely. The Metairie is a large cemetery, built on an old horse track, with a predictably confusing layout.

We had a few rough directions as to where we might find Marcello. It took about 20 minutes of riding up and down the same roads and looking at the same headstones before Zean, my 11-year-old, shouted, “There it is!” Sure enough, there was Marcello’s grave, an elaborate marker for what we are used to seeing here but a rather unassuming and subdued monument for someone of Marcello’s wealth and influence, albeit illegal.

All four of us stood there, quietly, for a few moments. The kids didn’t know much about Marcello, only what little bit I had told them on the way to the cemetery. But they seemed to understand there was something significant, ominous even, about the man we were visiting. In his life, which ended in that rarest of ways for a godfather – of natural causes, Marcello inspired awe, respect, and fear.

That hasn’t changed, even in death.