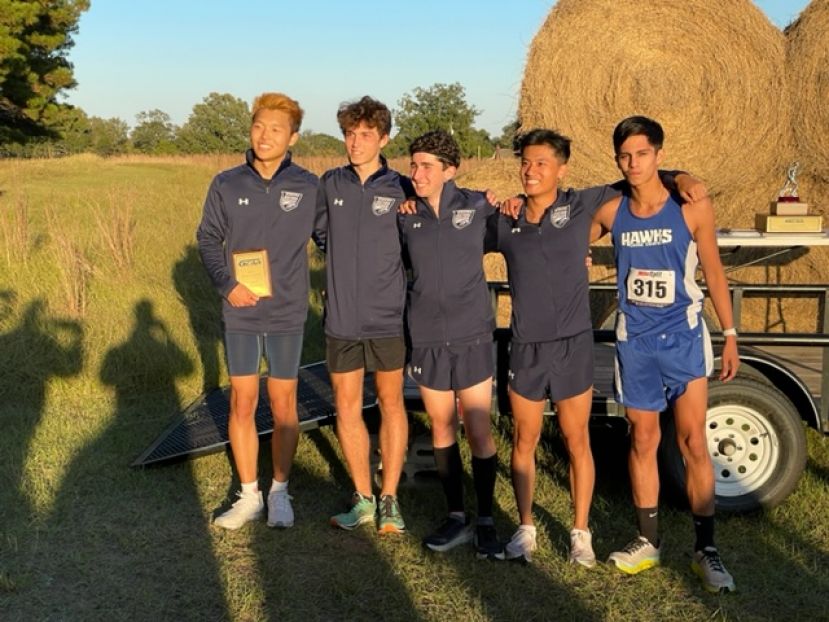 Submitted photo SGSC's Humberto Rivas (far right) is pictured with the rest of the All-Conference team from the GCAA conference championships Wednesday.

Sophomore Humberto Rivas, a Coffee High graduate, turned in a 29:53 8K effort at the GCAA Region 17 Conference Championships Wednesday afternoon in Milledgeville, good for fifth place overall and a spot on the All-Conference team. Rivas was also the only runner in the top five of either the men’s or women’s races who was not an Oxford Emory runner. The SGSC cross country program fielded a men’s team last year for the first time since 2017; Rivas’s performance signaled a significant step in the right direction for the program.

On the women’s side, sophomore Bree Howard, who attends classes at the Waycross campus, ran a season personal best and finished in 10th. Overall, the women’s team came in fourth. Another former Trojan, Zulmy Tapia, just missed the top 10 with a 12th place finish. Grace Stone, also a former Atkinson County Rebel, placed 15th while a pair of former Pierce County Bears who also attend the Waycross campus, Felicity Hicks (24th) and Sarah Davis (25th), rounded out the SGSC field.

“This was a great way to end the regular season — a total of five top 10 finishers over the last two meets. These runners have worked very hard since August and everyone performed well down the stretch. I’m especially proud of Humberto for his sub-30 minute effort. He would have broken the mark last year but a mid-season case of COVID set him back significantly. Stetson also ran a great race and cut a lot of time this year. And to have Zulmy and Grace bring home medals from Albany State was also special. They’ve worked really hard over the last two years and it was great to see them get rewarded like that,” said SGSC coach Robert Preston Jr.