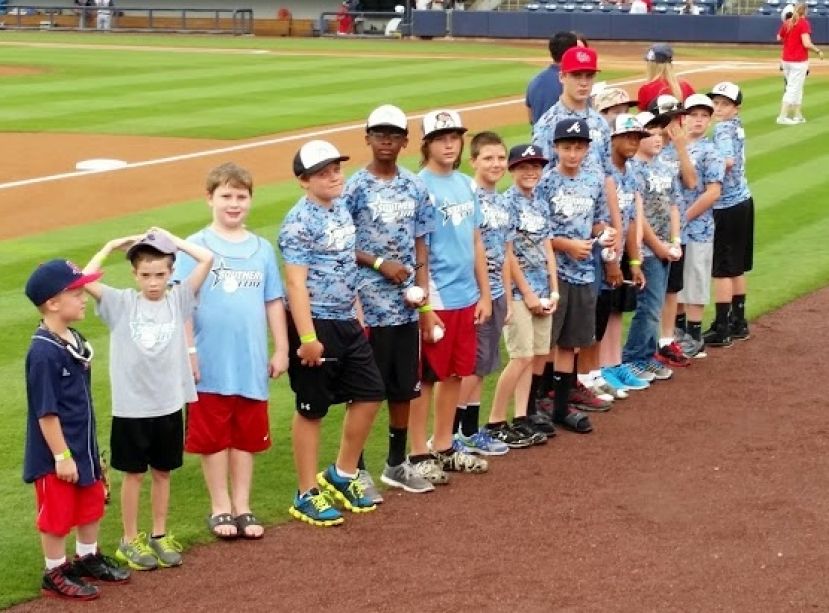 Contributed photo Southern Elite team members prepare to be honored as "Team of the Night" at the Gwinnett Braves game Friday, June 27, prior to their participation in the Final Four tournament over the weekend in McDonough.

Over the weekend, the Southern Elite 11U travel baseball team played in the GA USSSA Final Four in McDonough.  SE earned a berth to the event by winning the USSSA South State tournament on June 15.

On the eve of the tournament, the SE players attended the Gwinnett Braves game where they were honored as the “Team of the Night”.  Each Southern Elite player got to go on the field to get autographs from Braves players like Joey Terdoslavich, Tyler Pastornicky and Christian Bethancourt and then run onto the field with a Braves player as he took his position to start the game.

Southern Elite player Luke Waldron summed it up best when he quipped, "That was so awesome!”.

After a great night at the Braves game, it was time for the young men of Southern Elite to get to play the game of baseball themselves.

As an 11U-A team, Southern Elite was scheduled to play other 11U-A teams that had won their way to the event.  However, SE’s bracket completely fell apart just 48 hours before the start of the tournament, as all three teams they were scheduled to play backed out.

Having no one to play, SE’s head coach, Jeff Weems, contacted the USSSA state office on Thursday and requested that they be allowed to play in the 12U-A tournament as there were only three teams scheduled to attend.

Said Weems, “We use the Final Four event as a goal for our program.  They earned the right to be there and I wanted to do everything I could to give our guys the opportunity to play.  Having to play up in age against 12-year-olds was certainly going to make it tougher for us, but I knew that our guys would welcome the challenge and could hold their own”.

Southern Elite was matched against the #1 seeded team to start the tournament and, in an exciting ballgame, came away with a 8-4 victory.  Trailing 4-1 going into the fifth inning, the Southern Elite bats came alive as they put seven runs on the board.  Logan Miller delivered the decisive blow with a two-out, based loaded double to the right centerfield gap to clear the bases.  On the mound, it was a collaborative effort between Ty Taylor and Jarrett Dopson.  Taylor went three strong innings, giving up three runs and striking out seven. Dopson would close out the final two innings, giving up a run and striking out four.

SE’s second game immediately followed their game one win, but they weren’t able to carry over the momentum, as they lost 8-0.

“Our guys fought hard, but we just never could get going offensively," Weems said. "Their pitchers did a really good job and they put some timely hits together to push runs across the plate.  We played well defensively and didn’t give up a big inning, but they just got a couple here and there and they added up.  The game was a lot closer than the score indicates.

Ty Taylor and Jarrett Dopson both collected hits in the game to lead the SE attack.  On the mound, Tra’Vonte Williams tossed two innings with four strikeouts, Nathan Vining threw an inning with two punch outs and Hayden Weems went two-thirds of an inning.

With the loss in game two, SE would have to work their way through the loser’s bracket on Sunday.  Their next opponent was against the hottest hitting team in the tournament, which was scoring ten runs per game.

Ty Taylor was handed the ball to start the game and he pitched three and one-third of an inning, giving up only four runs and striking out three.  In the top half of the fourth inning, Taylor and Will Berryhill would reach base via hit by pitch, and Jarrett Dopson reached first with a bunt single to load the bases with nobody out.  The next batter, Trey Wright, would stroke a double to the right center field gap to clear the bases and bring SE within one run.  A couple of pitches later, Wright stole third and scored when the catcher’s throw ended up in left field.

With the game now tied 4-4, it was a drag race to the finish.  Taylor went back out for the bottom of the fourth and ran into trouble, giving way to Jarrett Dopson who induced a bases loaded groundball back to himself to get the force at home for the second out of the inning. He then struckout the next hitter to get out of the jam.  SE was unable to score in the top half of the fifth, so Dopson headed back to the mound.  After walking the first two batters, Dopson threw an inside fastball to the next batter, who was attempting to bunt.  The ball hit him in the arm while trying to bunt the ball, but the umpire said that the batter had pulled the bat back and awarded him first base on a hit by pitch.

“We put ourselves in a bad spot walking those first two guys, but that hit by pitch call really hurt us.  It was clearly an attempted bunt and I just don’t understand how they saw it differently,” said Weems.

With the bases now loaded and nobody out, the next batter ripped a single to left field to score two runs.  Dopson walked the following batter to reload the bases and then gave way to Trey Wright.  Wright got the first man he faced to hit a tapper back to himself which he threw home to Slade White who then whipped the ball down to first base for the double play.  However, the umpire called the batter safe at first on a bang-bang play.  Two more runs would score in the inning.

Now trailing 8-4, Southern Elite was down to their final three outs.  Dopson delivered a single in his at-bat, but SE couldn’t put a string of hits together and score any runs.  With the loss, Southern Elite was eliminated from the tournament, but they were put out by the team that ended up winning it all; beating the winner’s bracket team twice by scores of 20-11 and 14-5.

"I’m extremely proud of our guys and the way they played this weekend," Weems said. "We knew that we were at a competitive disadvantage as many of those guys had already turned 13, but we took them on and came within an inning of playing for the championship.  All in all, our guys had a tremendous weekend, as we had a great team outing where they got to meet many of the Braves AAA players on Friday night and then we went toe to toe with three really good baseball teams and beat one of them.  I’m appreciative of the opportunity for our guys to play those teams, as the experience will only make us better."

For the tournament, Jarrett Dopson and Ty Taylor led the team both at the plate and on the mound.  Dopson hit .571 with a 1.196 OPS, and Taylor hit .400 with a 1.025 OPS.  Logan Miller and Trey Wright led the team with three RBI each.  On the mound, Taylor threw six and one-third innings, striking out ten hitters, while Dopson threw two and two-thirds innings with five strikeouts and a .200 batting average.

Southern Elite will complete their spring season with Summer National tournaments to be held in Brunswick (July 18-19) and Dublin (July 25-27).