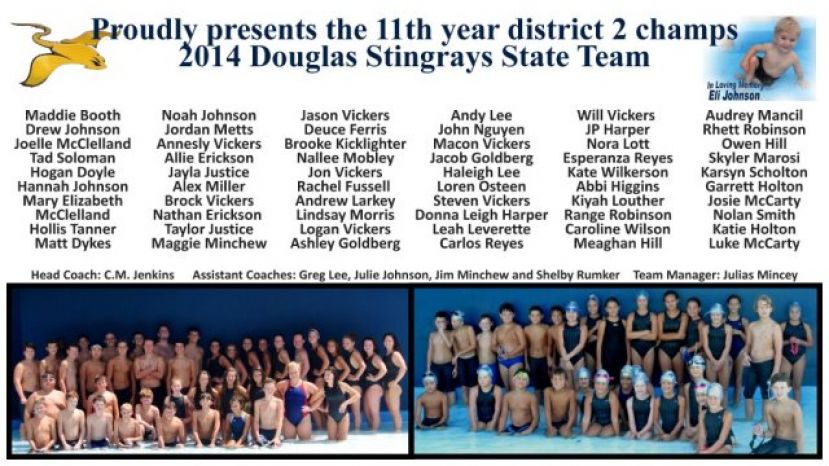 The Douglas-Coffee County Stingrays are state champions. On Saturday in Tifton, the Stingrays finally attained their most important team goal, one they had narrowly missed for the last four years. After finishing second to Oconee County over that time span, the ‘Rays edged out the perennial Class B/C GRPA champions to win their first ever state title. Douglas had 479 combined team points and Oconee came in second with 472. Jefferson County placed third.

“Choosing their team from six satellite programs in the county, Oconee has had the deck stacked against all of the other teams for the last 10 years or so,” commented head coach CM Jenkins. "We qualified 59 swimmers for the state meet and our numbers this year put us over the top. This is a great accomplishment for our swim program here in Coffee County.”

The Stingrays also had five state crowns in the relay competition. The 9-10 boys team of Hogan Doyle, Macon Vickers, JP Harper, and Rhett Robinson won the 100 free relay on Friday. The boys and girls 13-14 year old relay teams placed first in the each of their relays on Saturday. The girls' team of Haleigh Lee, Taylor Justice, Mary Elizabeth McClelland, Meagan Hill, and Alli Erikson won the 200 medley and 200 free relay, while Steven Vickers, Garrett Holton, Logan Vickers, John Nguyen, and Jacob Goldberg repeated the task in the boys 13-14 relays.

This championship is a testament to the hard work of the swimmers, the support of their parents, and the dedication of the coaching staff of Jenkins and assistants Greg Lee, Julie Johnson, Jim Minchew, and Shelby Rumker.