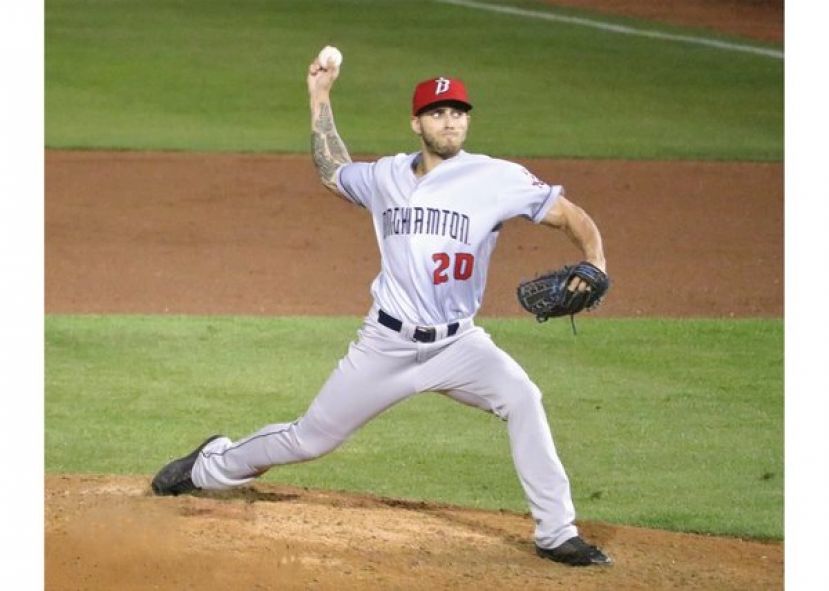 Submitted photo Tyler Bashlor steps in as relief pitcher for Binghamton during the 2017 playoffs to secure a save for the minor league team.

Tyler Bashlor is doing something most little boys only dream of when they are in the yard playing catch with their dads. On Feb. 12, 2018, Tyler will walk out onto the field at spring training in Port Lucie, Florida as an addition to the New York Met’s 40-man roster. As impressive as this is, it did not happen overnight.

Growing up in Springfield, Georgia, athletics was central to family life. In a house filled with three boys, Tyler’s parents were always on the go. He says, “My family has always been supportive of me. When it came time to leave after high school and start at college, they never stopped being my biggest fans.” Fortunately for Tyler, he found his way to the former South Georgia College (now South Georgia State College) in 2011. As a freshman under the helm of Coach Jeff Timothy, he became a member of the SGC Tigers baseball team. The campus in Douglas became a second home to him. He explained, “I loved South Georgia. It was a small campus and you had the chance to get to know everybody. It was the right fit for me because it was still like my high school in some ways, but with the college feel. I matured a lot during that time as I learned to live away from home.” Coach Timothy and the assistant coach at the time, Corey Pye, made a positive impact on him. They not only trained the team in baseball, but they kept them on the right track in their academics and took time to do things away from the field. “I actually became a better golfer because of Coach Timothy,” Tyler says with a smile.

His respect goes much deeper than athletics for his coaches. As they do with every team member, they treat them as an extension of their own families. He remembers vividly the time during his sophomore year that he found out his grandpa did not have long to live. He was in the weight room in the school’s gym and his mom called to tell him he needed to come home before he passed away. Tyler went to Coach Timothy and explained the situation. The coaches and his teammates gathered around him to pray and offer comfort so he could face the days ahead. Tyler recalls, “That day caused me to realize how important being a part of a team was and I have a lot of respect for my South Georgia coaches and teammates because of that.”

The family support didn’t slow down during his college career. His parents made it to every game they could, whether at home or away. He is proud to say his dad only missed three games during his years at South Georgia. When Tyler went home for the weekend, his dad would suit up and catch for him as he practiced his pitching. All this must have worked. He was noticed by the New York Mets organization and during his sophomore year in 2013 was selected in the eleventh round of the draft to the Mets.

Tyler made his professional baseball debut with the Kingsport Mets in the Appalachian League. His season was cut short because of an unexpected Tommy John surgery in 2014 that placed him on the disabled list. While disappointed, Tyler did not let the time out to rehabilitate get him down. He says, “Having that time to recuperate actually matured me and made me a stronger player.” Once he started back in 2015, he had the opportunity to play on several of the Mets’ minor league teams. He finished up the 2017 season in Double A as a right-handed reliever with a 0 earned run average (ERA). By being placed on the 40-man roster, he will take part in spring training and hopes to start the 2018 season in Triple A or even the major leagues. “By being around these seasoned players in spring training, I can learn from them and try to position myself in a place to make it to the majors soon,” says Tyler. “Whatever happens, I will be preparing and be ready when the time comes.”

Coach Timothy sees a bright future for Tyler. He adds, “Tyler is an outstanding young man that has worked very hard to get where he is today. All of us at South Georgia look forward to seeing what he will do next.” He is certainly in a place to continue his climb to success and all who know him, from his family to his former college team, will be cheering him on.