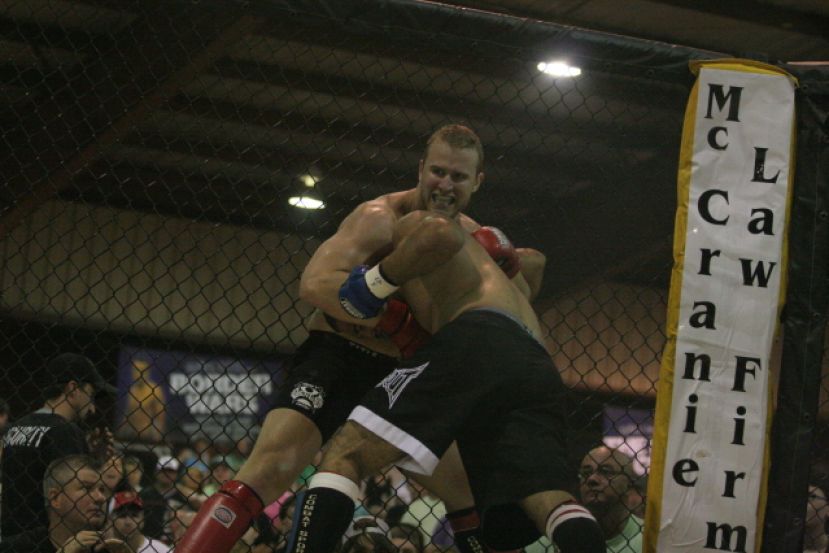 Months of training. Weeks of hype. And only 140 seconds to finish. Just 2:20 into the first round, Willy “Right Hook” Wright of Baxley defeated Sammy “Lights Out” Elisis of Douglas by technical knockout to win the South Georgia Fighting Championship light heavyweight championship at Border Wars in Nicholls.

A capacity crowd filled the Wiregrass Arena and waited patiently for 13 fights to see the showdown between two of the best mixed martial artists in the region. Wright, Baxley’s #1 fighter, and Elisis, Douglas’s top mixed martial artist, are good friends who are both known for their striking. By the time the two fighters entered the ring, the electricity in the air was almost palpable. And they didn’t disappoint.

Almost from the opening bell, Wright controlled the tempo of the bout. He seemed calmer and maybe a bit more relaxed than an obviously amped up Elisis. Wright was cautious of Elisis’s stand-up game and had plans to take his opponent to the ground. It looked like a pretty good plan early on; Elisis struck first and caught Wright flush in the opening seconds. Elisis, however, made a critical mistake and immediately rushed Wright. The Baxley fighter was surprised by Elisis’s punch but not really hurt. He countered as Elisis came in and landed a solid punch of his own. From that point on, Wright was firmly in control. It was then that the Appling County fighter decided to alter his strategy. “When I grazed him that first time, I knew I had stunned him. I was going to take him to the mat because his stand up is so good. But then I decided to stand with him,” said Wright after the fight.

Following the first exchange, Wright suffered a low blow that stopped the fight briefly. When the bout resumed, Wright went after Elisis again, knocking him to the mat. Wright pounced and hit Elisis with a flurry of unanswered punches until the referee stepped between the two and stopped the fight. “Was I surprised? Kind of,” said Wright. The win improved Wright’s MMA record to 3-1 while Elisis dropped to 4-2. “I’m not real sure what’s next. Just whatever comes up,” stated Wright.

Following their title fight, the only pros on the card – Jimmy Alexander of Newberry, Fla., and Mitchell Chamalle of Orlando, Fla. – battled for the SGFC bantamweight belt. Chamalle, who entered the cage to the Spice Girls’ “Wannabe,” submitted Alexander 2:03 into round two to win the belt.

Both Wright and Chamalle must defend their titles at least once per year with the SGFC organization.

More in this category: « Two title belts up for grabs at Border Wars Gators hand Trojans a 24-21 loss in opening region game »