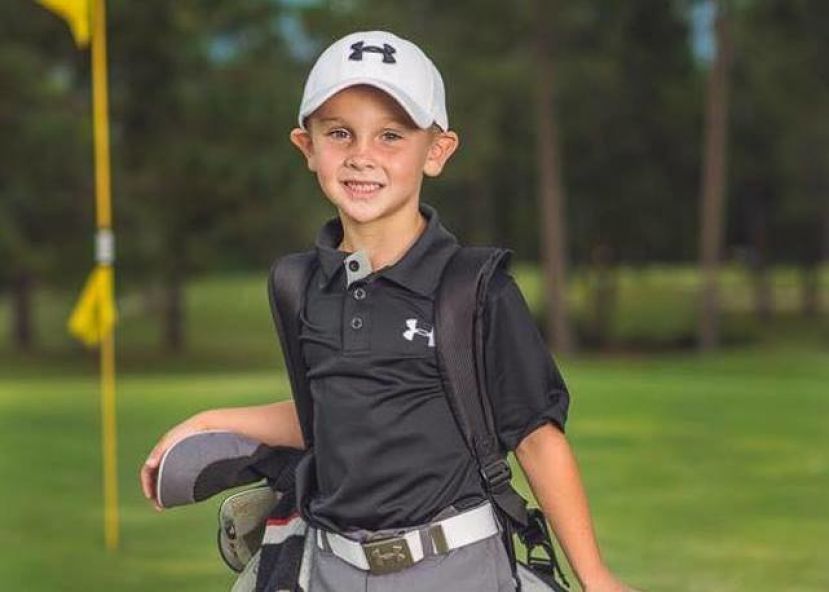 Ace Harris's golf career started innocently enough. His father, Jason, started taking him to the golf course when Ace was 18 months old. Jason wanted to play. Jason and Brandi have two other children, both daughters, with activities of their own. Brandi shuttled them to their practices, leaving Ace with Jason. He has a choice -- stay at home with Ace or carry him to the course.

Off to the links it was.

Now, four and a half years later, Ace is playing in the U.S. Kids Golf World Championships in Pinehurst, N.C. "He started swinging a driver before he could walk. He started competing at four years old and really fell in love with it," says Brandi.

Ace progressed quickly. His swing was solid from the start and he enjoyed his time at the course. But golf is a tough game and getting good takes time. The challenge is keeping the game fun while at the same time putting in the required amount of work. The Harrises seem to have found that balance. Ace spends upwards of 10 hours per week playing and practicing. "We don't have to force him to practice. He wants to. He's at home on the course," says Brandi. At the same time, they keep his practice enjoyable. "He putts against his sisters. When we practice, we play for M&Ms and Skittles. We let him play barefooted if he wants to. We keep it fun. It's not a job." An energetic and fun-loving young man, Ace isn't one for very many words. When I spoke with him at the Douglas Golf and Country Club, he didn't want to talk. I tried to pry a few words out of him about his upcoming tournament but he wasn't having any of it. He just looked at me then looked at his mom. "Can we go to the practice green now?" he asked in her direction. And off to the green he went.

Ace earned an invitation to the world championships after winning the US. Kids Golf Jacksonville Local Fall Tour in 2017. This year, he's also won the Jacksonville Spring Tour and was tied for first heading into the second day of the Georgia State Championship last month. He ended up finishing tied for third. Ace holds a burgundy status within U.S. Kids Golf; it's the highest priority status in the organizations. Ace and two other golfers from the Atlanta area will represent Georgia at the world championships. There are 71 golfers in Ace's age group. The tournament will take place from Aug. 2-4. The six and under golfers will play at Midland Country Club.

Jason serves as Ace's caddy, which is an all-encompassing job that entails much more than simply carrying Ace's clubs. He's carried Ace to the next tee after a bad hole. He holds Ace above his head so Ace can see the flag on certain holes. And of course he's there to encourage and advise Ace throughout the round. "It's amazing watching him play. I'm impressed every time he's on the course. When he was a year and a half old, I never thought we'd be at a world championship tournament, especially not this quickly. But he's earned it and he deserves it. He's such a great all-around kid," says Jason.

While a lot of parents might be looking well into the future at this point, the Harrises aren't. Ace has been successful and the success has come rapidly. But Ace is more than just a golfer. He's a talented little athlete who loves whatever sport is in season. One day, he may put down his clubs in favor of basketball, baseball, football, or even tennis. "God has blessed him athletically. Our biggest prayer is that Ace would honor the Lord in all his endeavors and stay humble and kind in whatever that may be. Today, it's golf. Who knows what the future holds. But right now, the memories we are making and the moments we share together on the course are irreplaceable. With every shot, we grow as a family. Ace is teaching us all," says Brandi.