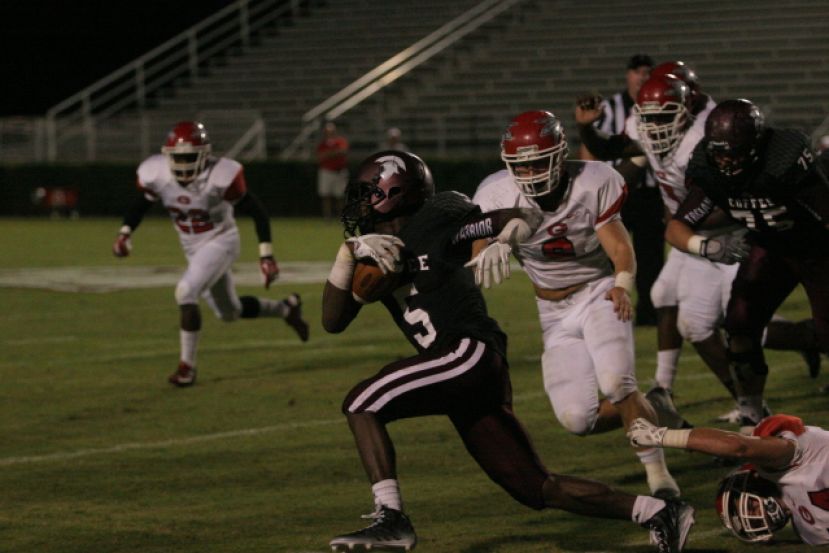 Robert Preston Jr./Douglasnow.com Coffee running back Demetrius Davis (#5) suffered a deep thigh bruise late in the first half that looked much scarier than it was. The injury looked much worse than it was and Davis returned to the game in the second half.

The Trojans rebounded nicely after last week’s heart-breaking loss to Ware County in the region opener and played a solid game through and through. The Trojans’ small defensive backs had some trouble with Glynn Academy’s bigger, stronger receiving corps, and the Red Terror passing attack netted some big gains. But the defense made stops when it needed to and kept Glynn Academy off the scoreboard for nearly the entire game.

“This was a big win for us,” said Coffee head coach Robbie Pruitt after the game. “We responded well after last week. Glynn Academy is a good football team. They stacked the box like we thought they would but we were able to get off some big pass plays against them. They made it tough on us but I thought we did a good job of mixing up our pass and run plays.”

The Trojans scored first, kicking a 27-yard field goal on their opening drive of the game. The Red Terrors answered by launching a long drive of their own that ended with a touchdown to give them a 7-3 lead. That would be the last time Glynn Academy would score for the rest of the night.

On Coffee’s ensuing drive, Sears scored on a seven-yard touchdown pass from quarterback Tyree Paulk. The point after was good to give the Trojans a 10-7 advantage. That particular extra point would be the only one Coffee would make the entire night.

After the ensuing kick, Glynn Academy took over on their own 32. They moved the ball well against the Trojans but came up on fourth down fairly deep in Coffee territory. They lined up for a field goal – it would be a 34-yard attempt – but ran a fake instead. The play would have worked spectacularly if not for a holding call on the Red Terrors. The penalty backed up the kick to 42 yards and the attempt was unsuccessful.

Coffee took advantage of Glynn Academy’s missed opportunity and marched 80 yards downfield, eventually scoring on a 15-yard touchdown pass from Paulk to Wilkerson. The missed two-point conversion left the score 16-7 with 4:01 left in the first half. The Red Terrors nearly scored on the kick-off, returning the ball to Coffee’s 49. Later in the drive, faced with another fourth down, Glynn Academy broke a 39-yard pass play that put them at the Coffee 10. However, another mistake – this time a fumble that Coffee’s Cam Davis recovered – gave the Trojans the ball once more. Before Coffee could score again, the half ran out.

In the second half, the Trojans added scores by Chris Swinson (five yards) and another by Wilkerson (34-yard pass from Paulk) to take a comfortable 28-7 lead. Quarterback Tyree Paulk had three touchdown passes on the night while Wilkerson led the Coffee offense with two touchdowns. After the game, Coach Pruitt in particular praised Lecarvius Sears for the way he played. “I tell you, the player of the game was Lecarvius Sears. He made some great blocks for us. He has so many roles and does so many different things for us. This was a big game for him,” said Coach Pruitt.

Next week, the Trojans travel to face Effingham County. They return home on Oct. 3 to face Statesboro.