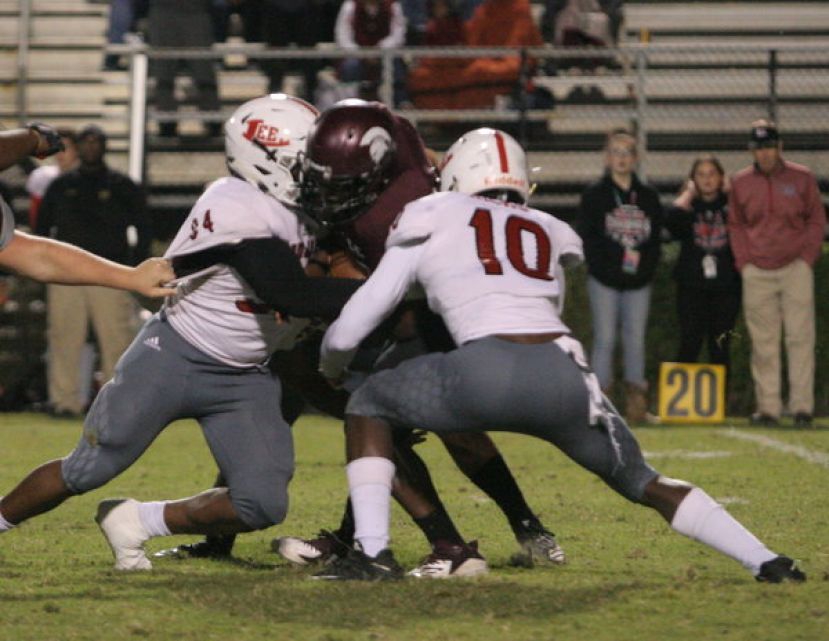 The Coffee Trojans last lost a home game on Nov. 4, 2016, when the Lee County Trojans rolled into town and came away with a 31-20 win. Since then, Coffee has been on an undefeated home winning streak.

That ended tonight, once again at the hands of the Lee County Trojans.

Lee defeated Coffee 38-7 in a game that was never close. Coffee even faced something its players hadn’t seen in a long, long time – a running clock in the second half. That came about thanks to a 31-0 Lee County lead at halftime.

Lee’s Trojans were just too big, too fast, and too physical. Coffee head coach Robby Pruitt called Lee’s defense “the fastest I’ve ever seen.” Coaches tend to exaggerate at times but this wasn’t one of those. With six bona fide Division I prospects on the defensive unit, they were all they were billed to be.

Lee scored on every possession in the first half – four touchdowns and a 33-yard field goal. Coffee, meanwhile, just couldn’t get it together on offense. All year long, the passing game has been a weakness. Lee stacked the box on defense and dared the Trojans to drop back and throw. It’s a similar game plan to what both Valdosta and Northside-Warner Robins did to Coffee but Lee was much more effective.

The outcome, however, was the same. Coffee came out in the third quarter and scored its only touchdown of the game. Maurice Turner broke a 67-yard run that gave Coffee a first and goal from the three yard line. On the very next play, quarterback A.J. Wilkerson ran in for the score.

The game also proved costly for Coffee; no fewer than three Trojans had to be carried off the field with injuries: IJ Tatum, Antonio Dawson, and Josiah Killebrew. Dawson sprained his ankle at the end of the second quarter and came out after halftime in a boot. The extent of Dawson’s and Killebrew’s injuries remains unknown. Killebrew did play after he was hurt but he was noticeably uncomfortable the remainder of the game.

Coffee finishes the season with a 7-3 overall record (1-3 in region play). The Trojans have made the playoffs as a #4 seed and will travel to the Atlanta area next Friday to play the winner of the Stephenson-Tucker game.