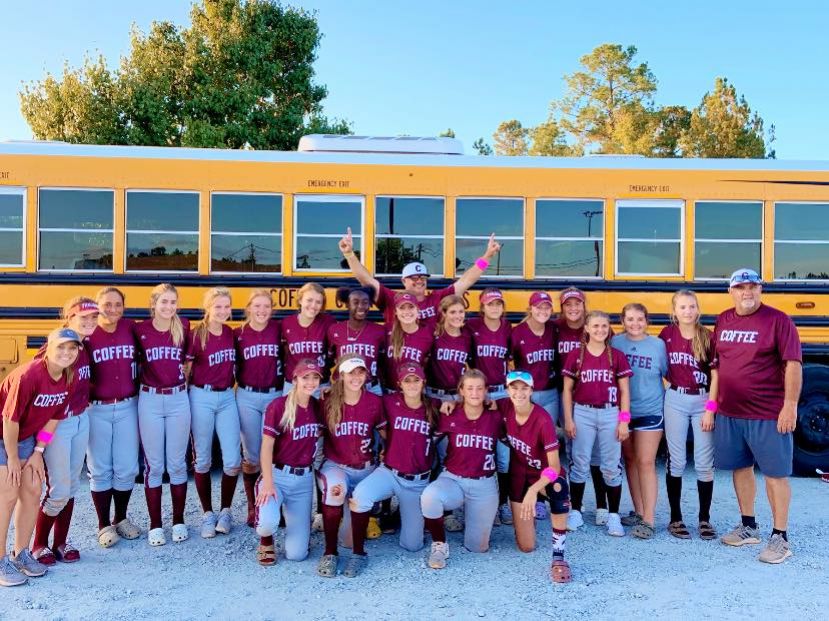 A decisive game 3. A long tie-breaking home run in the final inning. And a potentially game-saving defensive play in a crucial situation. The first round of the GHSA state softball playoffs had it all. And the Coffee Lady Trojans came away with the win.

The Lady Trojans headed to Augusta to face the # 8 team in the state in the Greenbrier Wolfpack.  After a split on Tuesday, the Lady Trojans clinched a trip to the second round with a 10-7 win in the rubber game.

In game 1, Coffee’s offense was relentless, scoring 16 runs and held the explosive Wolfpack to just one run in three innings.  Emily Robinson was brilliant, allowing only two hits.  Freshman Hannah Capps led the offense with three hits including two doubles.  Emily Robinson and Kali Williams added two hits each for Coffee while Kelsey Taft, Emily Elisis, and Heidi Woodward had a hit each.

Game 2 was a different outcome with Greenbrier drawing even in a 9-6 win.  All three pitchers worked for Coffee but the Wolfpack got the better of the Lady Trojans.  Senior Kelsey Taft continued to pound the softball with four hits while Madison Strickland and Hannah Capps had three hits each.  Jenna Graham added two hits and Emily Elisis, Kalee Metts, and Kali Williams chipped in one apiece.

Facing elimination in game 3, the Lady Trojans took an early lead only to squander it. They refused to give up and battled back to win it.  In a tie game 7-7, the Lady Trojans scored three in the top half of the 7th and held the Pack scoreless to win.  Emily Elisis came up big for Coffee with two hits including a long 7th inning homer to change the game in Coffee's favor.  Hannah Capps, Jenna Graham, Kali Williams, and Kelsey Taft all added a hit including four RBI for Taft.  Emily Robinson threw two innings and gave the ball to Reagan Thomas for five innings to seal the deal with five strikeouts and the win.

Thomas had a little defensive help in the bottom of the seventh. With one out and a Greenbrier runner on base, a Wolfpack hitter lifted a fly ball to left that looked like a sure home run. Hannah Capps had other plans. She went to the wall, waited, and timed her jump perfectly. She went up and brought the ball back in for the second out of the inning. Had the ball left the park, the score would have been 10-9 Coffee with just one out and momentum shifting in favor of Greenbrier. Capps’s catch essentially shut down the Wolfpack and sealed the win for the Lady Trojans. The final out was a formality at that point. Thomas struck out the next batter and Coffee advanced.

"I can't say enough about how these girls never quit and their ability to fight. Emily Elisis's at bat in the 7th epitomizes this squad, nine pitches and a long homer to swing the momentum in our favor.  Then a couple doubles by Graham and Williams and this team was feeling the upset," stated head coach Stan Hughes.  "Our three pitchers -- Robinson, Thomas, and Strickland -- battle every single time they get the ball and give us a chance to win. Our seniors have really started to lead late in the season. The kids have really played well the last three weeks and as a staff we're extremely proud of their effort and looking forward to next week. It goes without saying that our community really supports all these kids from Coffee in every sport and so does our school system. We couldn’t do it without their support."

Coffee will travel to Northgate in Newnan for Round 2 on Tuesday.