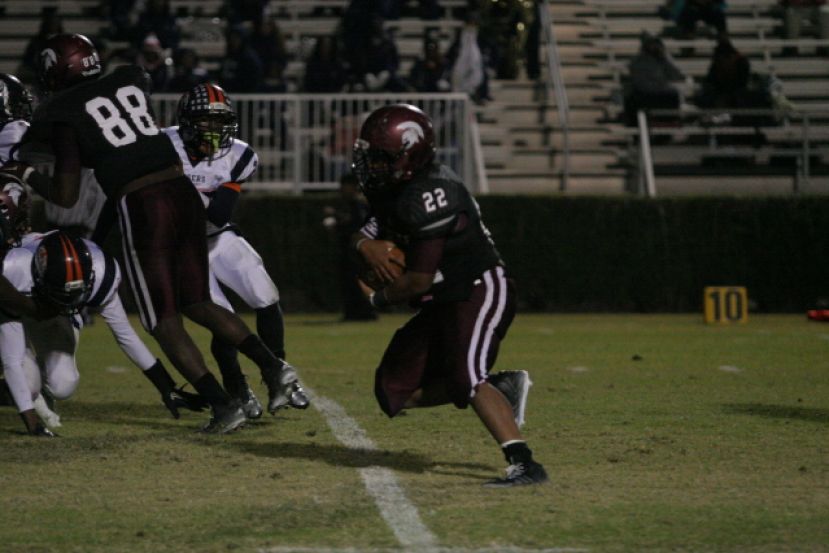 Robert Preston Jr./Douglasnow.com Coffee running back Lecarvius Sears races toward the end zone in Friday night's 14-6 win over the Mundy's Mill Tigers in the first round of the state playoffs. Sears scored one of the Trojans' two touchdowns on the night.

For just the fourth time in school history, the Coffee Trojans topped the 10-win mark after they defeated the Mundy’s Mill Tigers 14-6 in the first round of the state playoffs Friday night at Jardine Stadium. The Tigers proved to be worthy opponents, holding the Trojans to a scoreless first quarter and keeping the high-octane Coffee offense out of the end zone most of the night. “They were tough. They had lots of speed, just like we knew they did. But this was a huge win for our kids,” said Coffee head coach Robby Pruitt.

The Trojans came in averaging almost 37 points per game. The Tigers brought with them the best defense Coffee has seen all year and kept the Trojans on their heels early in the game. Coffee punted on its first two possessions of the game then had a 32-yard field goal attempt blocked. On the Trojans’ fourth possession, they finally found the end zone when Chris Swinson scored from six yards out. Austin Lord’s point after was good and Coffee led 7-0 with 8:40 left in the second quarter. The teams traded punts for the rest of the half until Coffee quarterback Tyree Paulk had a pass intercepted with just a few seconds left in the second quarter. Mundy’s Mill got one play out of the pick but came up short. Coffee carried a 7-0 lead into half-time.

The Tigers struck first in the second half, scoring on a 36-yard touchdown pass on their second possession of the third quarter. E.J. Harris blocked the extra point and the Trojans clung to a slim 7-6 lead half way through the third period. Not to be outdone, the Trojans immediately answered with a score of their own. Coffee only needed to move the ball 32 yards after a long kick return by Jeremiah Ashley. Lecarvius Sears did most of the work and he capped the short drive with the Trojans’ second touchdown of the night. Lord’s foot was true again and the Trojans increased their lead to 14-6 with just under three minutes left in the third quarter. Neither team scored in the fourth quarter and Coffee slipped away with the eight-point victory.

The Trojans will travel to Acworth next Friday to face Allatoona in the second round of the playoffs.