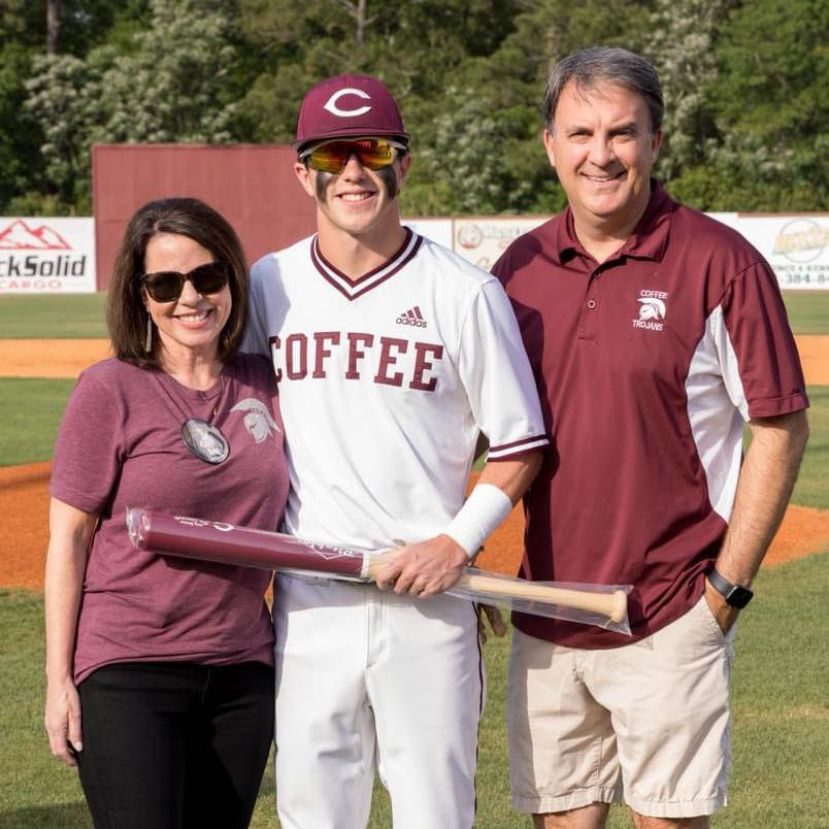 Ben Lingenfelter’s mother remembers the time she saw her 16-year-old son in the recovery room being taken off the ventilator after his second successful open heart surgery.

“We were in the room when he had to come off the ventilator and seeing your 16-year-old go through that, it’s just heartbreaking,” said Lingenfelter’s mother, Kellie.

Nearly three years later, Lingenfelter has not only survived but thrived as a member of the Coffee County baseball team

Lingenfelter was born with transposition of the great arteries (TGA) and two holes in his heart. He had his first heart surgery in Augusta, Georgia, at nine days old. The surgery was successful and he was able to be a “normal kid” with no limitations as his doctors and parents both thought it was important for him to be active and involved in any way he could. However, in fifth grade, his parents started noticing some problems.

“I am going to let him live a life like he is everybody else,” said Kellie.

The doctors discovered that he had a small leak from the first surgery, which required him to take daily medicine. Then, the summer going into his sophomore year, he had a second open heart surgery in Houston, Texas, where he had an aortic root graph and then an onyx valve put in.

Lingenfelter only missed eight weeks of baseball before jumping back in on the junior varsity team where he played the outfield. He was able to gain back confidence and get some added experience in before his junior year on the varsity team.

As the starting left fielder’s senior season and baseball career is coming to an end, Lingenfelter looks back on all the lessons learned, memories made and friendships gained throughout his time as a Trojan.

“The boys I take the field with have turned into my best friends, and more importantly, my brothers for life,” said Lingenfelter.

Baseball wise, Lingenfelter has always loved the game. He has never been one to ever sit the bench so it was a learning experience to not get to play in games and have to take on the role of a bench player. But, in the eight weeks he was out, Lingenfelter never missed a practice or game. He was quickly becoming the team's inspiration.

He got through the struggles of surgery with the prayers from his community, his family and a boy named Thomas Ross, said his mother. Ross, a current Gordon State baseball player, is about one year older than Lingenfelter and has the same condition. He was able to help Lingenfelter with the mental side of not playing, being sick and people thinking he is “different.”

He now has a greater appreciation for getting the opportunity to start for his senior year, getting to practice as normal and work out with the team. He also realized that the players on the bench have a significant role on how the game eventually turns out, whether it is keeping the books, being the bullpen catcher, retrieving foul balls or just encouraging the other team members. All of the things one considers “normal” were taken away from him in an instant, so he will never take getting to catch a fly ball for granted again and he tries to impress this among his teammates as well.

Lingenfelter does not see success as his statistics or ability on the baseball diamond, but rather making himself and everyone around him proud. He will stay in Douglas and attend South Georgia State College to pursue a business degree as his mother said they feel it is best to keep him home an extra year for him to better get a handle for his diet restrictions and medicine.

“Success to me means making my family proud, my team proud, one day my wife and kids proud, myself proud and most importantly my Heavenly Father proud,” Lingenfelter said. “If I do this, I will be successful.”

Coffee County won the first round of the GHSA class AAAAA state playoffs, beating Locust Grove 6-4 and 14-3. Lingenfelter finished the series with a .375 batting average collecting three hits and two RBIs. The Trojans will travel to Fayetteville, Georgia, on Monday, May 3, to face off against Starr's Mill High School with a berth in the state quarterfinals on the line.