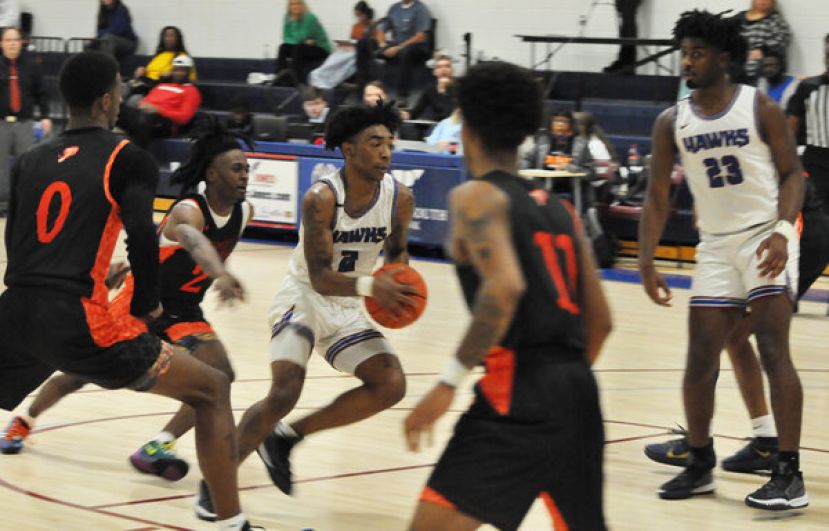 AJ Spencer's tying three-point basket Saturday afternoon as time expired sent No. 15 South Georgia State College's bench into a frenzy and the home crowd to its feet. It appeared the game against the Caldwell Tech Cobras was heading to overtime. Game officials ultimately ruled Spencer didn't get the shot off in time, and the Cobras escaped with a 52-49 win in the Applebee's Okefenokee College Classic.

"One play never defines a basketball game, because there are so many other plays involved," said head coach Cory Baldwin. "We will continue to work and tip our hats to Caldwell Tech for playing a great game."

It was a tale of two halves for the Hawks (5-1), as they led by as many as 18 points in the first half and held the Cobras to 20 percent shooting. Caldwell Tech held SGSC to only 16 points in the second half, with 10 of those points coming from the free throw line.

Spencer was the only SGSC player in double figures with 21 points. Malik Crawford and Turahn Thompson each grabbed 10 rebounds.

In Friday night's game, SGSC faced the Denmark Tech Panthers and cruised to a 57-30 win. The Hawks held the Panthers to only five points in the first half and forced a total of 47 turnovers for the game.

Spencer and Thompson were SGSC's leading scorers Friday night with 11 points each.

The Hawks will continue their non-conference schedule Tuesday night on the Douglas Campus against New Rock Prep. Tip for the game is set for 7 p.m. The next Waycross Campus home game will be Thursday, Dec. 2 at 7 p.m. against Edward Waters College (JV).