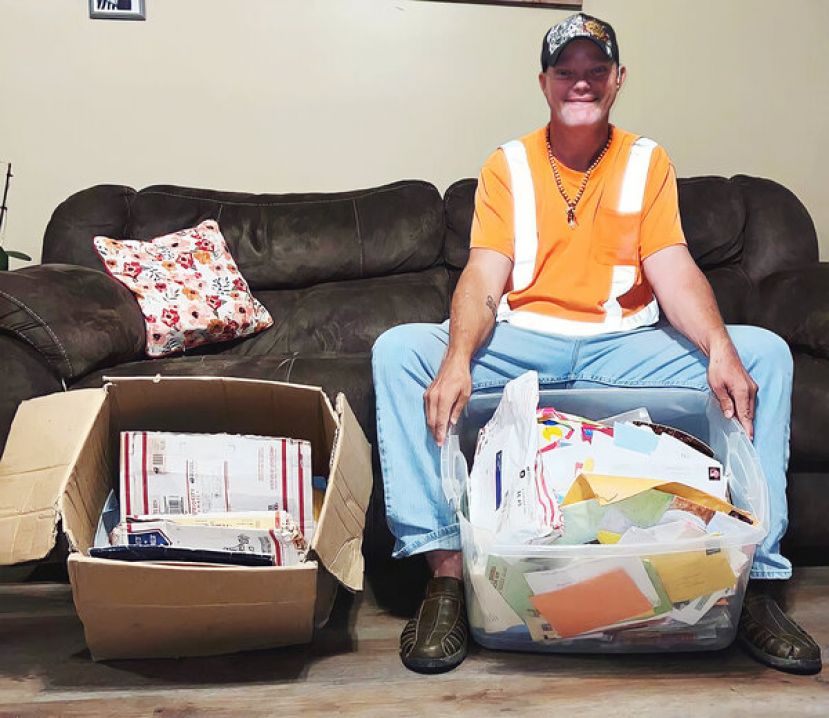 Submitted photo Brice Thipgen shows off the birthday cards he has received over the last few years.

Over the last ten years, a small project that began as a way to for a sister to brighten her brother's birthday has ended up being Brice Thigpen's favorite gift each year.

In 2012, Heather Thigpen, Brice's sister, started Birthday Cards for Brice by asking her friends on social media to send birthday cards to Brice, who was born with Down’s syndrome.

Heather said that when she made the social media post, she hoped he would receive a piece of mail that year but never expected it to catch the attention of so many people from around the state and the globe. "I thought about how excited Brice would be to get mail on his birthday, so I just decided to ask my family and friends on Facebook to send him a card, and it ended up getting a lot of attention, and that's how it began," Heather shared.

In the first year, Brice received nearly 105 gifts and cards from locals and members of nearby communities that came across her social media post. "It was amazing to see random strangers go out of their way to put a smile on someone's face that they would never even meet," Heather stated.

In its third year, the posts sharing Birthday Cards for Brice began to spread like wildfire, with him receiving over 500 cards.

Since the project began ten years ago, Brice has received approximately 2,500 cards wishing him a happy birthday, even some being sent from Africa and Asia.  "It's so humbling to see him get so excited over such a small act of kindness. He's the happiest person and loves the simplest things, whether he's playing the flute to bring rain or doing yard work. Every birthday, he gets so excited and will wait by the mailbox to see if a card came," Heather said.

Brice's birthday is just around the corner, with him turning 46 on Wednesday, July 6.

Heather asks anyone who wants to participate to send a card for Brice to the following address: 625 Edgar Road, Axson, Ga, 31624. "It may seem like something small to other people, but to him, it's something that he looks forward to each year on his birthday. He feels appreciated and loved opening the cards. We also want to thank everyone who has sent one over the years. If you can send one this year, you wouldn't just be making his birthday great, but contributing to the day he looks forward to most every year. A small act of kindness always goes a long way, but it goes even further for Bryce.”