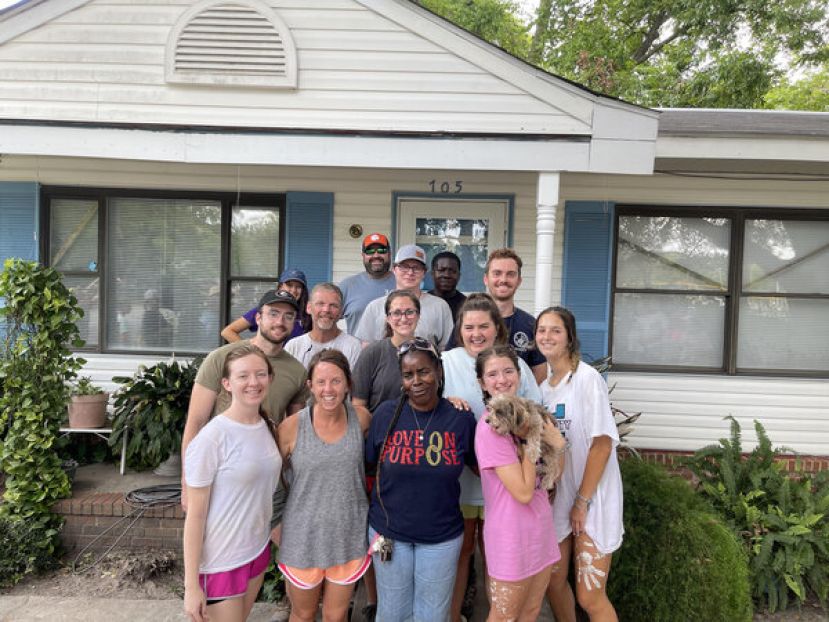 Submitted photo Camp One Fifty-One participants stand with one of the families the group served in Coffee County during camp week.

For the 17th consecutive year, a group of servant-oriented teenagers, young adults, and their leaders witnessed in our community to their Lord’s command to “love another” and “serve another”.

Camp One Fifty-One (COFO) as it is known, is based on the motto of “one week of intense service” followed by “fifty-one weeks of service and love to our fellow man”

The camp, ably led by Pastor Chris Calhoun of Douglas St. Mark United Methodist Church, was founded after Chris and others supported a working and loving camp in South Carolina twenty years ago known as Salkehatchie.

During an intense week of manual labor, service, and worship, the campers minister to a small group of homeowners needing major repair on their properties, by expending their own resources to “fix-up” the homeowner properties and by witnessing “God’s Love” to the various family members of the homes which are being repaired. In addition to fixing up these homes, the campers set aside time for rest and relaxation, worship, and prayer.

This year, five families in Coffee County were served by teams of nine to eleven workers, each led by seasoned senior and assistant site leaders. Most of the campers are high school, college, and young adults from Coffee County churches, and other churches from South Georgia and even South Carolina. Many of the leaders are adults who came through the One Fifty-One experience and who choose to come back year after year to serve the Lord by serving his people and to renew and extend friendships made at One Fifty-One.

The camp leaders and sponsors would like to offer a special shout-out to the churches, volunteers, coordinators, workers, campers, and other person who make it happen, including the community of Douglas and the loving families whose lives are hopefully touched by this very special week.

In an increasingly polarized world, it is easy to find things that concern and scare us all, so maybe we can find peace in looking right around us, in our own neighborhoods, where we see our children leading as they follow God’s command to share God’s love.