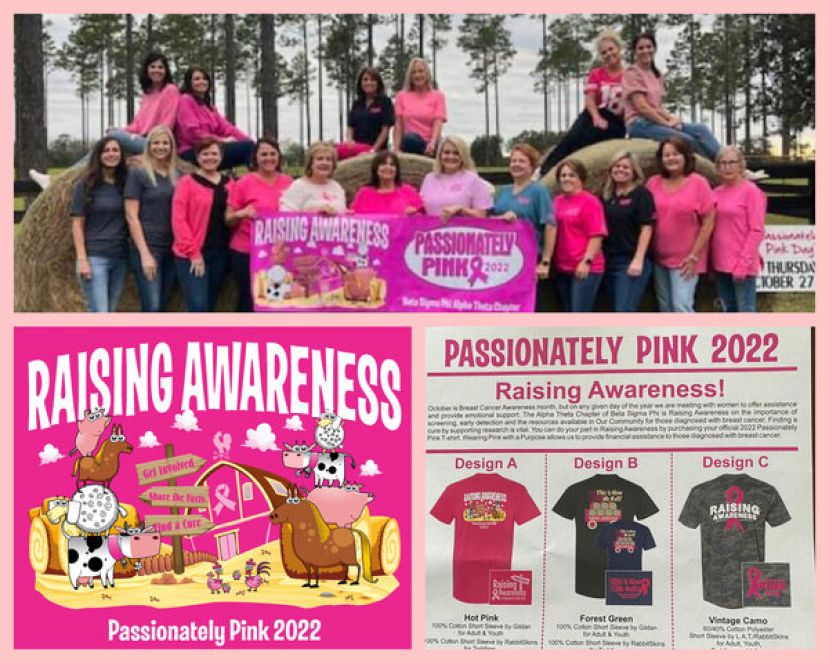 The city of Douglas is painted pink, with members of the Beta Sigma Phi, Alpha Theta Chapter, gearing up for their annual Passionately Pink Day to raise awareness against breast cancer.

Every year, the women of the chapter spend the month of October, Breast Cancer Awareness Month, focusing on the continued fight against breast cancer by raising funds for those battling the disease, research and encouraging women of the community to receive their routine mammogram.

Beta Sigma Phi chairman Lou Hennesy stated, "There is so much more to this month than just the pink flags and ribbons, and so much more than putting on a pink shirt. It has to do with the reason behind this case, which is to help those affected by breast cancer." Since the group made breast cancer awareness a priority, they have had three members diagnosed with the disease, one of whom passed away in 2009.

According to statistics from the American Cancer Society, breast cancer is the most commonly diagnosed cancer among women in the United States after skin cancer and is the leading cause of cancer death among Black and Hispanic women.

Based on the ACP's data, by the end of the year, an estimated 287,850 women in the U.S. are predicted to receive an invasive breast cancer diagnosis, with an estimated 43,250 succumbing to their illness.

The Passionately Pink group of Beta Sigma Phi will use donations to support local women who are fighting breast cancer by paying for their bills, co-pays, travel costs for operations, post-operative care, and other expenses. Additionally, the group creates gift baskets and offers babysitting for newly diagnosed women.

An emotional support group will also be accessible to both survivors and those who have recently been diagnosed at the start of the year.

Hennesy stated that they hold an annual reception for survivors and that this year, more than 160 women attended, demonstrating the need for breast cancer education and assistance.

Breast cancer survivors who haven't visited the Pink House, located at 311 Columbia Avenue, are urged to do so at their earliest convenience to pick up their survivor shirt and bag.

ACP statistics also showed that the death rate from breast cancer has dropped by 43% from 1989 until 2020, which is an estimated 460,000 fewer breast cancer deaths during that time. The organization stated the progress is due to earlier detection through increased awareness and screening, something Henessy encourages women to do.

"Mammograms are not a fun experience, and it isn't a fun process, but it is so important to stay up to date with those screenings and to make sure you're healthy because it is the easiest way to keep up with your health," Hennesy said.

Throughout Breast Cancer Awareness Month, several activities have been held, and fundraising efforts are still underway.

At Tidwell Carter's Fried Chicken, a young woman is now collecting money to raise $1,000 for the cause. If successful, the woman will dress up in a chicken suit to raise awareness of breast cancer, according to Hennesy.

Colony Bank is also joining in on helping with the cause, with an employee making pink fudge available to purchase, with proceeds going to the fight against breast cancer.

The Pink House is also still selling t-shirts for Passionately Pink Day, along with other merchandise. Members are also selling $5 raffle tickets with the prize of 12 floral arrangements from Deloris Florist.

"There isn't anyone who hasn't been affected by breast cancer, there are just too many women being diagnosed. These women need your help," Hennesy said.

Stop by the Pink House to make a donation or to purchase pink items to wear on Passionately Pink Day. For more information, call (912) 384-PINK.