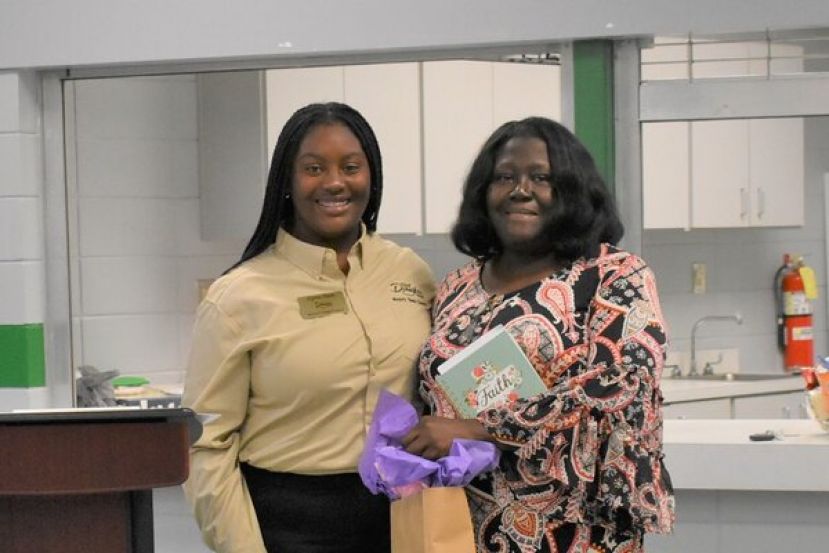 The Youth Council Jr. Commissioner Zynia Hunt was chosen as the Youth Spotlight for November.  Zynia’s parents are Melody Henderson and Mackenzie Hunt. She is a freshman at the George Washington Carver Freshman Campus where she in enrolled in gifted/honor classes. Zynia is a member of the Coffee High School Marching Band and plays the 5-string bass guitar and clarinet. In addition to being a member of the Youth Council, Zynia is also a member of the National Junior Honor Society. She is a member of Perpetual Praise & Worship Ministries of Douglas, Georgia and participates with church ministry through the Youth Advisory Board to Pastors, King’s Daughter Women’s, Church Announcer, Dance Team, Usher, and Musician.

Her academic goals are to first graduate from high school with honors. After high school, she plans to attend medical college to become an obstetrician-gynecologist.

For November, Zynia chose Katie “Scarlett” Davis for the Community Youth Spotlight. Scarlett is the daughter of Robert and Katie Davis and has one little sister, Laurel. She also has a small morkie named Munson. Scarlett is a junior at Coffee High School, where she is very involved in both clubs and academics. She is a member of the Coffee High School Marching Band and has participated in the Future Business Leaders of America (FBLA), Student Council. She is an officer of the National Honor Society and is part of the Chick-fil-A Leadership Academy. Scarlett was appointed to be on the Varsity Math Competition Team and is an ambassador for the Fine Arts, Business, and IT hallway at CHS. Scarlett consistently challenges herself academically, taking many Advanced Placement courses, and maintaining the position of being at the top of her class. She currently teaches piano lessons alongside Karen Batten at Karen Batten Piano Studios LLC, and also plays the piano for the worship team at Covenant Church. Scarlett has plans to attend Georgia Tech to pursue a degree in engineering.

Ms. Angela Carr was chosen as Zynia’s mentor for the Outstanding Community Leader Spotlight. Ms. Carr received her Bachelor's degree from Walden University. She has two children, Laquanta and Malcolm, and two grandchildren, Rakiya and Makiya. She attends and is a minister at Macedonia Baptist Church of Douglas, Georgia, under the leadership of Pastor Frank Robinson II.  Ms. Carr is employed by Action Pact as the Assistant Head Start Director. She has been employed by this agency for 31 years. Ms. Carr loves to serve in her church, on her job, and in the community. She believes that if she can impact someone as she passes along the way, then her living won’t be in vain. She is the founder of Reaching Beyond the Walls Outreach. She hosts a Facebook Live every Thursday at 8:00 pm on the Prayer Over Coffee Facebook page. This is an outreach that shares the Word of God and uses prayer as a tool to encourage the viewers to know that God is still performing miracles and that He is concerned about what concerns us. Ms. Carr’s main goal in life is to impact others to live their life on purpose.

The November guest speaker was Quincy Kelly from Bridge Builders Initiatives Studios/1 Accord Media. Mr. Kelly is originally from Atlanta, Georgia and has chosen Douglas as his new location for his film business. With the film industry being a large industry in Georgia, Mr. Kelly saw the need for film resources in South Georgia. He offers free film production and free acting classes to students to grow film industry services and offer job opportunities in film. Recently, the company had its first class to graduate and new classes are now being offered.