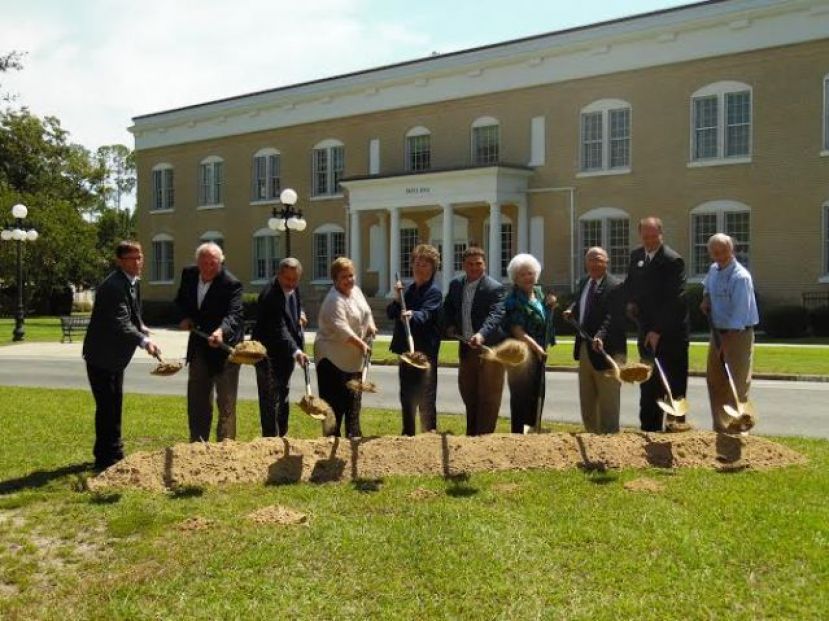 Davis Hall on the South Georgia State College campus will be getting a much anticipated face-lift starting next week. The building was built in 1907 and is listed in the National Register of Historical Places. It served as a home for presidents of the college before the president’s house was built, and representatives of families that lived in the building or grew up close to it were in attendance of the Davis Hall renovation ceremony and groundbreaking on Wednesday, Aug. 26. Many alumni of South Georgia State College were in attendance as well, including Mayor James Dennis who reminisced about his own time attending the college and expressed the importance of maintaining the historical integrity of the building during the coming renovation.

The renovation that is expected to take from 10 to 12 months to complete was proposed to State Sen. Tyler Harper shortly after his election in 2012 but the proposal fell through for a time. Funding did not materialize until 2014. “Education is economic development,” Sen. Harper stated at the groundbreaking. He correlated investments in education with boosting the economy, since professional and industrial work so heavily relies on educated workers and keeps the economy growing with stronger and more educated work force.

Studio 8 Architecture is the company that has designed the renovation, and project manager Matthew Hart from Studio 8 expressed his excitement to be working on the project. Davis Hall is a historic asset to South Georgia State College and to the community. However, the small rooms and outdated structure needed to be addressed to better accommodate a growing student body and technologically advancing educational program. The building has housed the Humanities Department for a number of years, but nursing and other classes will possibly be added following the renovation.

JoAnne Lewis of the Coffee County Chamber of Commerce spoke on behalf of the Chamber and thanked all that have made the renovation possible for adding value to the community. Allstate Construction will be performing the work.

South Georgia State College President Dr. Virginia Carson announced that the current fall 2015 student body, although not yet officially tallied, is estimated to be the largest ever recorded in the college’s history. The addition of two bachelor’s degree programs, Bachelor’s of Science in Biological Sciences and Bachelor’s of Science in Nursing, has bolstered attendance over the years, as well as strategic marketing. A new bachelor’s degree program is in the works, but will not be announced until it is approved by the Board of Regents.

Dr. Carson expressed that the advancements and improvements made to the educational programs of South Georgia State College should match the quality of the campus and buildings, which is why this renovation is such an important one. Not only will the repurposing of the building solidify the college’s respect for its heritage and history, it will help to mark South Georgia State College as one of the best in the state.

More in this category: « BOE recognizes students and their artwork at meeting SGSC officially opens the newly-renovated alumni house »
Login to post comments