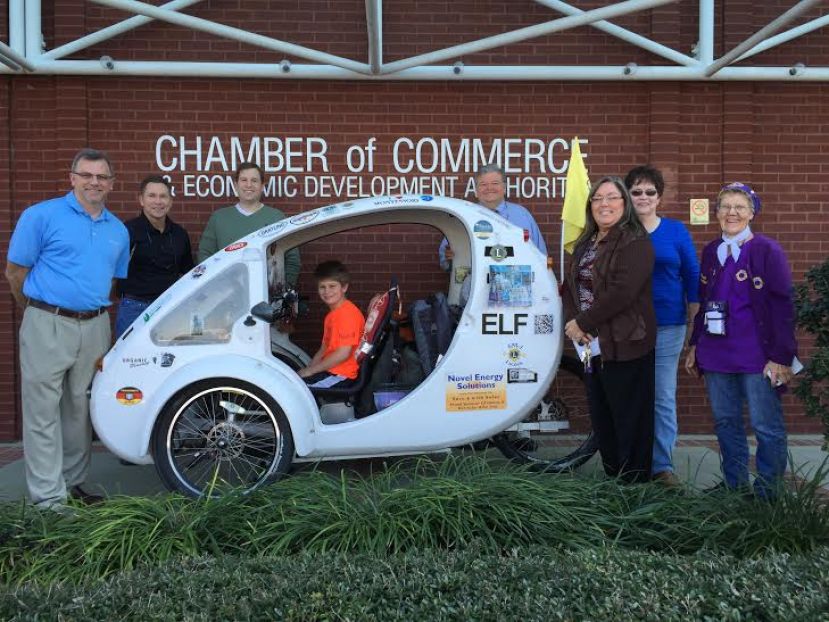 “I’m not very interested in sight-seeing. Everything is beautiful in its own way. I’m interested in people. All over, everywhere, people have been so nice to me,” says Hanna Elshoff, a 73-year-old native of Germany, naturalized American citizen, resident of Minnesota, Lions Club member, and cross-country cyclist who arrived in Douglas shortly after lunch on Thursday.

Elshoff is making her trek, which began nearly a year ago, on an ELF, a solar/battery/human-powered hybrid tricycle. Elshoff covers an average of 40 miles per day, though she doesn’t travel every day of the week. It is not uncommon for her to stay in her destination cities for several days at a time. She has also returned home to Minnesota once during her journey (she left the ELF with a friend) and she’ll be returning home again next month. She plans to leave the ELF in Durham, N.C., home of ELF’s parent company.

Elshoff was born in Germany in 1942. Though her family was not Jewish, they were Christians, which put them in the crosshairs of the Nazi SS. After the war, Elshoff’s father sat at the bedside of a dying neighbor. He confessed to her father that he had been a member of the SS and had been given orders to load Elshoff’s family on a truck. Fortunately, American troops arrived and liberated her community before the neighbor carried out his orders.

In 1961, Elshoff came to the United States, where she eventually became a naturalized citizen. When Jimmy Carter ran for president, she remembered thinking how unique it was that a farmer could become president of the United States. She wanted to become a citizen so she could vote for him. She wasn’t able to but Carter has always been a special person to her. President Gerald Ford signed her letter after she became a citizen; her goal has always been to have Carter sign it as well. “I went to Plains when I came to Georgia. I had dinner with Jimmy Carter on Jan. 31 and he signed my card,” says Elshoff proudly.

She is riding to raise money and awareness Leader Dogs for the Blind, an organization that trains service dogs for the visually impaired; Lions Club; and Toastmasters. She’s also trying to visit as many people as possible as a show of gratitude for what Americans did for her back in Germany. “Americans saved my life. If they hadn’t come to our village, I wouldn’t be here today. I want to show my appreciation for America and the American people,” she says.

Elshoff will finish her journey on or around May 1, 2017. She is staying primarily on the eastern portion of the United States. She is equipped to camp at her destinations but most of the time, people put her up for a night – or two, three, or even more. “I don’t really have an itinerary. I just go wherever,” she laughs.