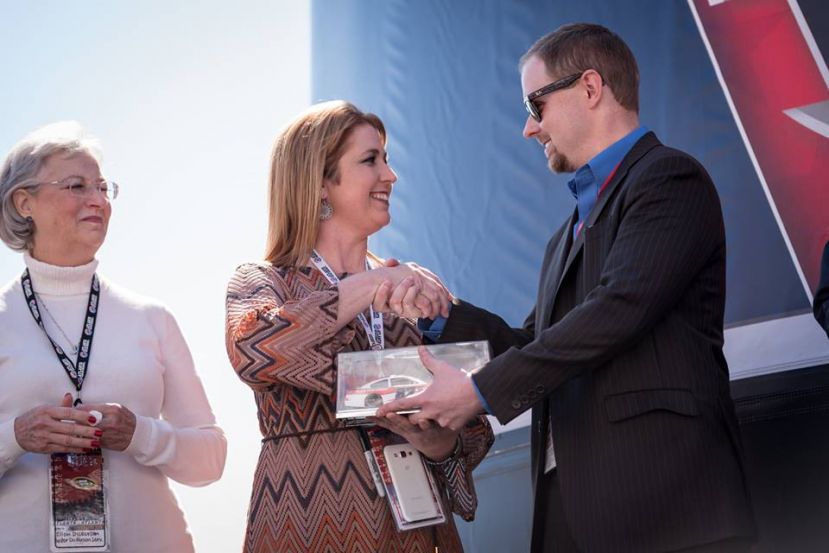 For Windi Raper, owner of Windi’s Bridal Boutique  and Carried Away Creations in Douglas, NASCAR was initially another way to spend time her father. He was a NASCAR fan and he instilled a love of the sport in Windi. Now, Windi’s is one of the most recognized faces around the track at Atlanta Motor Speedway, where she volunteers tirelessly with Speedway Children’s Charities. This year, at the Folds of Honor QuikTrip 500 at the speedway in February, Windi received the Buster Dickerson Service Award for the volunteer work she performed during 2015. She received the award onstage during pre-race ceremonies prior to the start of the 500.

Windi’s involvement with Speedway Children’s Charities, a 501(c)(3) nonprofit organization that operates all over the country, began with a simple email. In 2012, Windi, along with friends Mandy Harper and Lisa James, decided to attend the Labor Day race at Atlanta Motor Speedway. Windi does balloon décor through Carried Away Creations and decided to see if any drivers or their foundations had any events that weekend that she could provide balloons for. She stumbled upon the Speedway Children’s Charities information and emailed the then-director Ginger Moats. She was having a hard time getting through to Moats but kept sending emails. Finally, Moats replied. As it turned out, there were events that could use Windi’s talents. She went to the track on the Thursday before the race. “We literally unloaded my trailer and went to work. We worked all night. I saw what those volunteers did and it was a lot of fun. It was a lot of work but it was a lot of fun, too. I saw firsthand the difference people were making in the lives of children across the state,” says Windi.

The Atlanta chapter of Speedway Children’s Charities has reinvested over $4 million in grants, which is given to organizations throughout the state. Members of the racing, corporate, and even the local communities contribute to the charity. For Windi, being involved with SCC is a way to give back through the sport she so dearly loves. But what did her in was watching the reaction of a young paraplegic who took a ride around the track in the pace car. He got in the car on Pit Road and took off around the track. When he returned, he was laughing and squealing with excitement. “I had to go around the corner and compose myself. I was crying so hard. That’s what pulled at my heart strings and made me get involved with the charity,” says Windi.

During her four years of involvement with SCC, she has assisted with a number of different events, from passing buckets for the Red Bucket Brigade to helping with 5K runs and providing balloon décor for events with the governor. She had never heard of the award and didn’t set out to win anything. “I just went up there to share my time and talents with amazing people I’ve come to love as family. It’s fun and it makes a difference for children and families across Georgia. I will never believe I deserved this award. I am humbled and honored to be nominated by my fellow board members. This is a monumental moment in my life for sure!” she says.