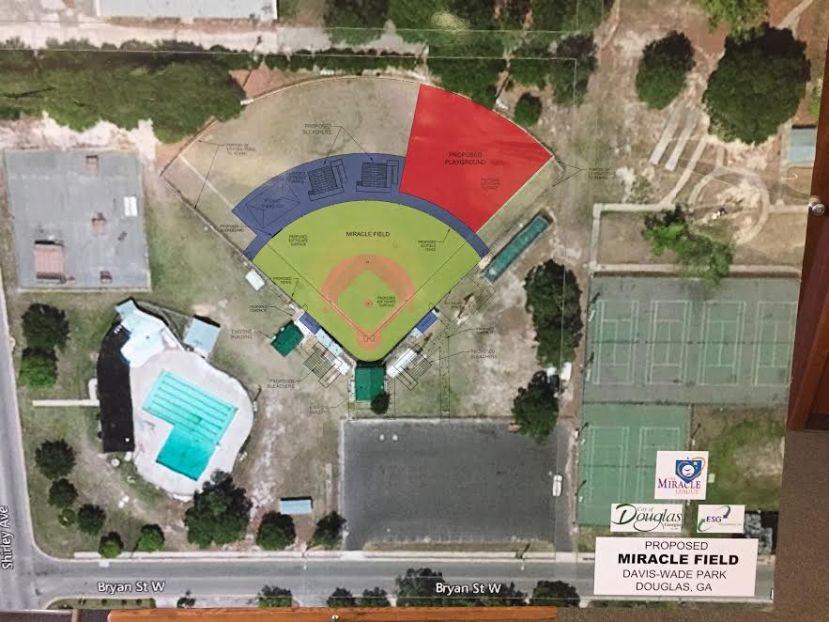 Robert Preston, Jr./DouglasNow.com This is a rendering of Miracle Field, which is currently Davis Wade Park. The city would like to renovate the park to accommodate Miracle League facilities so children and adults with special needs can participate in organized athletics. It's going to take a lot of money, upwards of $1 million, to bring the League to town.

The City of Douglas would like to bring Miracle League to town. There is support from City Hall. The city has donated facilities for the league and even has a tentative plan in place for a park renovation. What it doesn’t have is enough money to fully fund the league.

Monday, Miracle League’s Stephanie Davis met with city officials and community members at City Hall to discuss the logistics of forming a Miracle League in town. The city has pledged Davis Wade Park to the League and even has come up with a schematic for the park. It would have to be renovated to address the special facilities required for Miracle League.

Miracle League is an organization that provides a way for children and adults with special needs to play competitive sports. It started with baseball but has since spread to other sports. Baseball, however, remains the League’s primary sport. Games are played on special fields designed to accommodate wheelchairs and other needs that competitors with physical disabilities might require. The fields themselves are rubberized or a turf/rubber composite. Game balls are proprietary and are also designed to prevent injury while giving players a real game experience.

One unique feature of Miracle League is its buddy system. Each player has his or her own buddy on the field with them at all times. Buddies are usually the same age as the players. In addition to providing in-game support, having the buddy system also breaks down barriers and forges relationships beyond the field of play. Buddies often attend the same school as the players and once they get to know them on the field, that friendship extends into other areas as well. Ultimately, the buddies do what the league itself strives to do, which is to remove the unfair stigma that is often attached to individuals with disabilities. “The buddy program is phenomenal. It breaks down those barriers between special needs kids and their peers,” said Davis.

Miracle League often turns into a regional event, with players traveling from as far as 90 miles away to participate. The League includes special playground equipment as well. It’s much more than just baseball and it has the potential to improve the quality of life for children and families throughout the area.

The obstacle, however, is money. The city is ahead of the curve as far as facilities go. But, like every other Miracle League community, it needs money. The League will likely cost upwards of $1 million to fully implement. Before play begins, organizers will need an estimated $750,000. “We have everything we need but money,” said city commissioner Johnnie Lee Roper, one of the League’s biggest advocates in town.

Monday’s meeting didn’t get into the particulars of fund-raising and the various avenues there are for raising that kind of money. Organizers will address that as the process proceeds.

Just don’t forget the Miracle League. You’re going to be hearing a lot more about it moving forward.