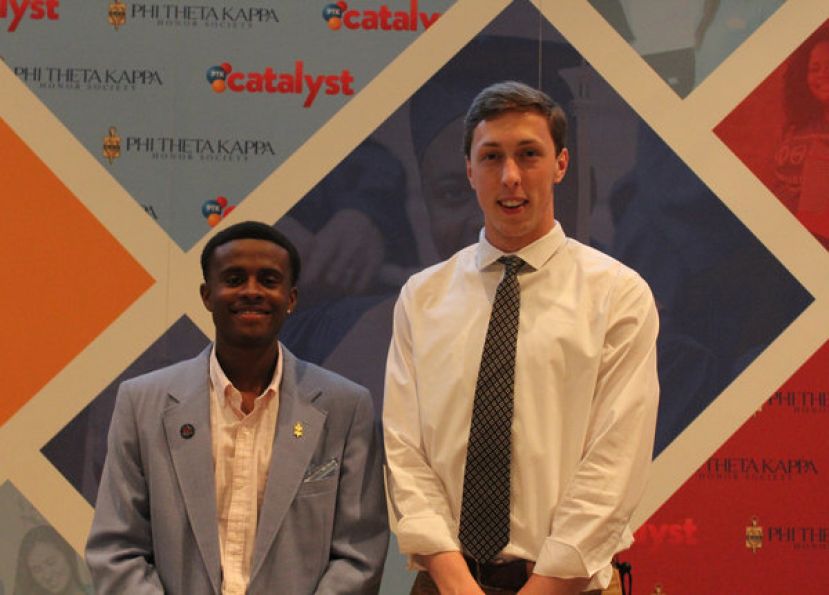 Students participated in educational forums and spent time with chapter members from all parts of the world as they learned leadership skills and ways to engage students on campus as part of the Phi Theta Kappa mission. During the general sessions, speakers touched on the Honors Study theme, How the World Works: A Global Perspective. As opening speaker, Dr. Jennifer Arnold from the TV show Little People, Big World encouraged people to think big to overcome obstacles to personal goals.

The internationally renowned photographer Platon discussed the relationship between humanity and leadership, which, to him, consisted of getting to know the people who are affected by decisions. He shared the background stories behind many of his famous pictures of political figures and people suffering from war and oppression; pictures included Barrack Obama, Michelle Obama, Bill Clinton, Edward Snowden, Vladimir Putin, Donald Trump, military families, and people who have seen war firsthand.

In addition, Jamie Hyneman, famous from the TV show Mythbusters, discussed myths and how the world works. He made the case for a liberal education where students should try to understand as much about the world as they can so that connections can be made between disciplines.

Zac Elz says of his experience, “What I found unique about the opportunity to go to the PTK Catalyst event was how many new and exciting people I was able to meet. It was a great experience to build connections for the future”. Mark Freeman added, “During Catalyst, I found the well-known guest speakers during our general sessions were the most interesting and exciting. Through these speakers, we were not only taught how to be better leaders for those around us, but also the different ways in how the world truly works”. Students also had the opportunity to visit local Nashville sites such as historic Music Row and Broadway Street.

Phi Theta Kappa Honor Society, headquartered in Jackson, Mississippi, is the largest honor society in higher education with 1,285 chapters on college campuses in all 50 of the United States, Canada, Germany, the Republic of Palau, Peru, the Republic of the Marshall Islands, the Federated States of Micronesia, the British Virgin Islands, the United Arab Emirates, and U.S. territorial possessions. More than 3 million students have been inducted since its founding in 1918, with approximately 134,000 students inducted annually.