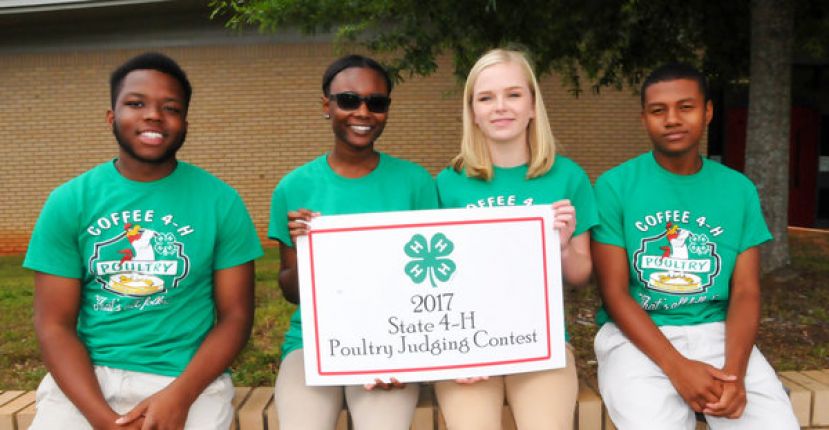 Coffee County 4-H Poultry Judging team had the opportunity to advance to the state poultry judging contest on Friday, May 12th after placing second at the area contest in Tifton on May 1st. Team members included Kyya Johnson, T.K. McIver, Micheal Woods, and Evie Woodward. At the state contest, contestants had to judge two classes of live birds (photos were used due to this year’s outbreak of Avian Influenza in north Georgia), two sets of oral reasons on those classes of live birds, two classes of ready to cook birds, a written test, a class of shell quality eggs, a class of broken out eggs, two classes of candling eggs, and a class of parts identification.

Only the top two teams from the four area contests and the next four highest scoring teams at large are invited to compete in the state contest. The state contest is very competitive and scores are very close. Coffee’s team placed ninth in the contest, but did a great job representing Coffee County and Southeast District 4-H in this contest.

With school getting out for the summer break, it means it is camp time for 4-H members. Georgia 4-H offers summer camping opportunities at five 4-H centers around the state including two on the Georgia coastline at Jekyll Island and Tybee Island, one in the mountains at Dahlonega, one in the outskirts of Atlanta at Hampton, and the world’s largest 4-H center near Eatonton. Each year, each county puts in a request for the camp and the week that they would like to camp for their Cloverleaf 4-H members. This is usually done around late July or August for the next year. Counties are then notified around late August or September when and where they will be camping for the next summer. Summer camp for Cloverleaf 4-H members (grades 4-6) this year will be held at the Rock Eagle 4-H Center the week of June 12-16.

Senior 4-H members (grades 9-12) also have the opportunity to attend 4-H camp during the summer. The last couple of years, Senior 4-H camp has been held at the Rock Eagle 4-H Center near Eatonton because it is the only camp facility large enough to hold all the 4-H’ers who wanted to attend. While at this camp, these 4 H members get to spend a day at the University of Georgia campus and learn more about 4-H’s tie to UGA. This year’s Senior 4-H Camp will be held May 29-June2. Senior 4-H members also have the opportunity to participate in a Senior Extreme Camp at Rock Eagle’s Pioneer Camp. It’s a more rugged camp and is only open to about 40 participants statewide.

More in this category: « You can register for SGSC's summer semester through June 5 GWCFC honors students at year-end assembly »
Login to post comments