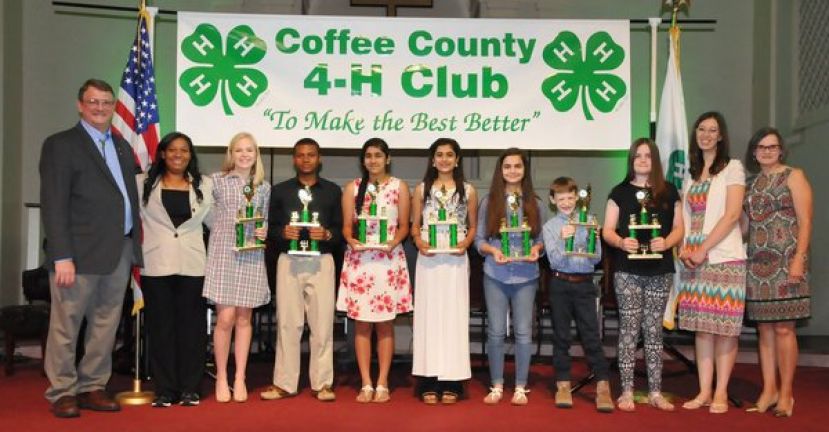 Over 250 people gathered at the First Baptist Church in Douglas on Monday evening, May 8, 2017, to recognize active Coffee County 4-H members and volunteers during the Annual 4-H Honors Night Program.  4‑H members were presented awards for their participation in District Project Achievement (DPA), Poultry Judging, livestock shows, target sports, and community service projects. The evening began with Anna Grace Grantham performing some violin music accompanied by her mother, Greta Grantham, on the piano. Willie Spence also sang a song as the Grantham's provided the music.

Some of the achievements recognized throughout the year were Austin Fuller earned the Master 4-H Showman Award at the State Breeding Doe show and is now a Master 4-H'er. Ashton Gillespie donated the largest donation of can tabs in Coffee County for the Ronald McDonald House Charities Program. Brooke Gilliard won first place in the State Sporter Air Rifle Match and also earned Master 4-H'er status. Brooke also received a $500 scholarship from the National Wild Turkey Federation. Brice Grantham was the high individual at the state (and national) shotgun match. The shotgun team made up of Jordan Davis, Brice Grantham, Lance Ricketson and Blake Tanner won the state (and national) shotgun match and are all Master 4-H'ers now. Abby Hamilton was the second place state winner in the Pantry Pride Contest. T.K. McIver was the third highest scorer at the Area Poultry Judging Contest. Evie Woodward was the high individual scorer in the Area Poultry Judging Contest. Evie was also the Senior 4-H district winner and Ishika Sadarangani was the Junior 4‑H district winner of the Leadership in Action Awards program. The Senior Poultry Judging team was the second place team in the Area Poultry Judging Contest in Tifton this year. T.K. McIver and Willie Spence earned trips through competing at DPA to compete at the State 4-H Congress event in Atlanta this summer for a chance at becoming a Master 4-H'er.

4-H would like to thank First Baptist Church of Douglas for allowing the organization to use the church and especially Mr. Arnie Bowers for his assistance with setting up. If you have questions about the Coffee County 4-H Club program, or questions around the farm or home, please feel free to contact the Coffee County Extension office at (912) 384-1402. Remember, we are YOUR local connection to the University of Georgia.