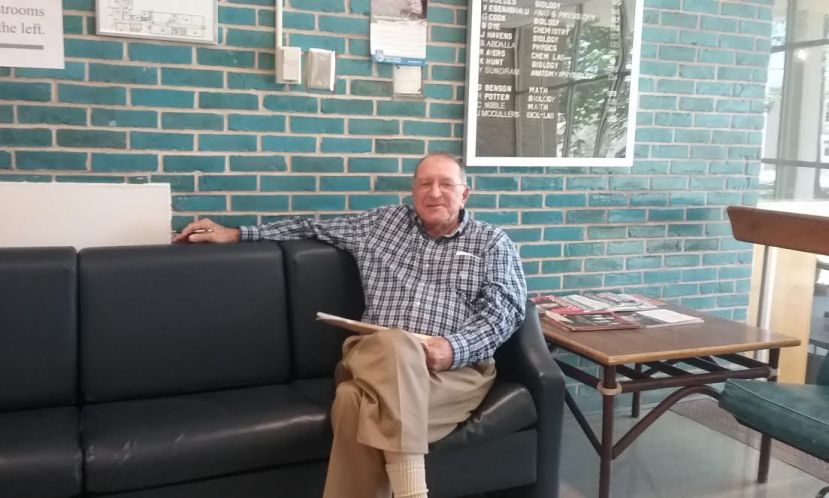 Bradley Bennett/DouglasNow.com Delano Deen sits in the lobby of Stubbs Hall at South Georgia State College, where he spent a large portion of his career inspiring and leading the thousands of students who passed through his classes.

Delano Deen was born in Bacon County at his parents’ home. This was back when doctors made house calls. He’s spent his professional life making a positive impact in education and beyond. And that impact has been considerable.

Here is just one example among many: In December of 2016 Mr. Deen received a letter from Dr. Jack Lewis. Dr. Lewis spent 42 years at New River Community College in Dublin, Virginia and was retiring from his position as president. As a teenager he never thought about going to college until one day his high school physics teacher took him to Statesboro to visit Georgia Southern College (now University). This one act of philanthropy led young Jack to become Dr. Lewis. And allowed him to aid countless other young people on their own journeys. As he wrote in a letter to Mr. Deen, “Delano, until I die, I will be passing on to others out of respect for you what you have passed on to me.”

Another example: A man contacted Mr. Deen’s cousin, Marvin M. Deen, on Facebook, asking about a chemistry professor he had had at South Georgia College. The man, Richard Scott, recalled Mr. Deen as one of the smartest people he had ever known and “truly… a great communicator.” He went on to recount some of his classmates -- friends who had gone on to be a doctor, a pharmacist, while Richard Scott was now Regulatory Compliance Manager for Dow Chemical, overseeing 4,000 miles of pipeline.

It all started as Delano Deen was working with his father in their cotton patch in 1960. He had two bachelor’s degrees from Georgia Southern College and was intent on returning to further his education, but only after helping his father get the crop out. He was approached in the field by the principal of Jeff Davis High School. The school had lost their only science teacher to dental school and had no one to finish the year. He asked young Delano to help. After initially demurring, a young Mr. Deen said, “I’ll just give you the rest of this week and maybe that’ll give you some time to find somebody.”

As good as his word, Mr. Deen showed up bright and early the next morning. The students trickled in and took little note of the young visitor to their classroom. They stood around in groups and talked among themselves. Delano picked up a book from the teacher’s desk and threw it down in the middle of the tile floor. “It sounded like a shotgun... I said, ‘Boys and girls I came over here today because you didn’t have a teacher. And furthermore,’ I said, ‘I’ve come over here to give you all the very best I have to offer. If you don’t want any there’s the door.’ Nobody left. But anyway, that’s how I got started.” It was during that first year that Mr. Deen met young Jack Lewis. On the last day of the school year he told Jack Lewis not to worry about getting a ride home. He took young Jack - a high school senior - to South Georgia College and helped him get enrolled. Jack Lewis graduated from SGC, went on to graduate from Georgia Southern, and took his doctorate from Virginia Tech.

It was quite a beginning. And it would be a long career. Delano Deen would spend the rest of his professional life in education -- first at Jeff Davis High and then at South Georgia College, where in 1968 he was given the Outstanding Teacher of the Year award and won $500 from the Georgia Consumer Finance Corporation. He spent 37 years in education. But it isn’t only young lives upon which Professor Deen has had an impact. His work has also touched our physical environment in a lasting and positive way.

It was in the early 1970’s that Professor Deen - now teaching at South Georgia College - was served condemnation papers by a representative of the U.S. Army Corps of Engineers. He informed Mr. Deen that Hurricane Creek, which ran near the home he shared with his wife June and their two young boys Jeff and Brad, was being turned into a development to be known as Lake Alma. Exercising the right of eminent domain, the government was paying as little as $35 to $40 per acre for his family’s land. After seeking guidance from future Nobel Laureate Dr. Eugene Odum, with whom Mr. Deen had taught for a year at UGA, he fought the project. They determined that Hurricane Creek drains 228 square miles and as a tertiary treatment facility alone it was worth over $400 per acre per year. It took twenty years but Delano Deen saw that Hurricane Creek was protected.

In the course of the successful battle he was first named Conservationist of the Year in 1974 by the Georgia Wildlife Federation, then made president of that body. He was then elected Region Four Director of the National Wildlife Federation and served three terms in that position. Region Four comprises Alabama, Florida, Georgia, Mississippi, Puerto Rico, and U.S. Virgin Islands. In 1989 Delan Deen was named Environmental Volunteer of the Year by the Georgia Environmental Council. It was not until 1990 that the proposed project was finally put to rest for good, preserving 1,400 acres of Bacon County wetlands for posterity.

Delano Deen became friends with Jim Fowler of the Wild Kingdom television show, served in the U.S. Army in the Scientific Professional Personnel program, and became a charter member of the National World War II Museum in New Orleans. And the fire still flashes as brightly as ever in his eyes, when he shares the stories of his brother, his cousins, and his friends, those who served this country so selflessly. Mr. Deen is particularly proud of having helped his 98-year-old cousin Vivian to retrieve his lost service records and his many medals, including two Purple Hearts, which Congressman Jack Kingston came to Alma to present to Vivian personally.

Today Professor Deen takes takes a fairly serious approach to retirement. And as a former president of the Catfish Farmers of Georgia Association, he definitely takes one thing very seriously. Speaking of the college here in Douglas he said, “You know when I left here I put down typewriters and computers and all that stuff, picked up a fishing rod and, I haven’t ever looked back.”