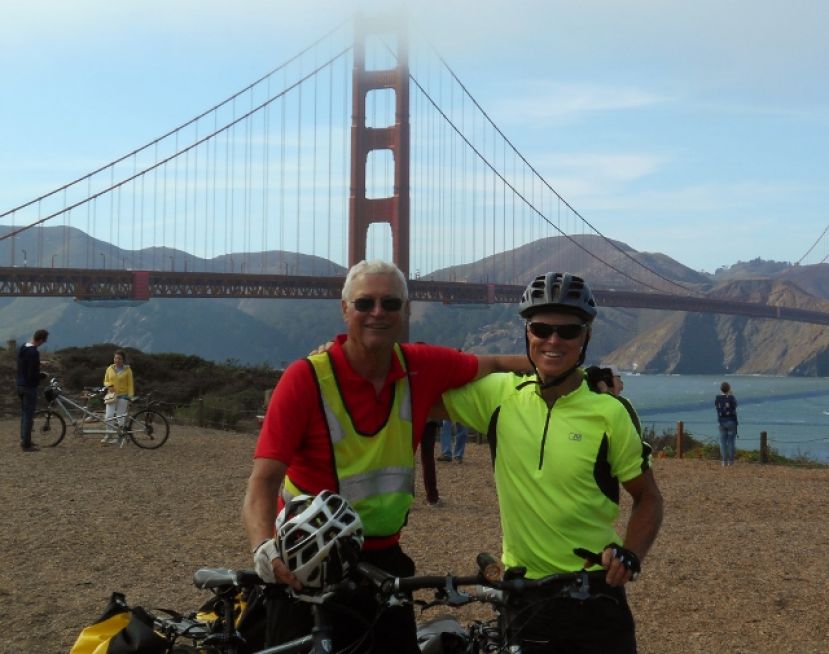 Submitted photo Ron Morris and Jack Tracy in San Francisco on the Pacific Coast ride, circa 2014.

Perhaps many of us dream of having an adventure in life, but not so many of us follow through on it. In Coffee County, we have but to look within our own ranks to find someone who has followed his dreams for adventure and has done so in a really big way.

Ron Morris came to Douglas in 1972 as a student and baseball player at South Georgia College. He came here from the Atlanta area, where his father worked with Delta Airlines. After excelling on Clyde Miller’s South Georgia College teams, Ron moved on to Georgia Southern, where he played for the Eagles for two years. While in Douglas, Ron met Patty Hand.   After college, Ron and Patty married, eventually making Coffee County their home.

Ron became a New York Life Agent, and Pat worked with the Coffee County School System. They are celebrating their 39th anniversary this month and their adult children, Abe and Meg, make their home in Coffee County as well.

In the 1970’s and 80’s, Ron competed in marathons. In a six year period, he ran over 14,000 miles, competing in the famous Boston Marathon, among others. While Ron took a break from long-distance activities for a few years, that interest was renewed in 2008 when he and another local began discussing the possibility of hiking the Appalachian Trail.

“Neither of us had six months available to thru-hike the trail, but we decided we could do it in sections," Ron says. "We set a date to hike the Georgia section in late September of 2008.   I had little camping experience, but began to purchase the things I would need for the hiking and camping. I began training to get in the physical shape to hike 12-15 miles a day, while carrying a 40-45 pound pack. When it came time, the other person backed out.”

“I plan to take three months in 2015 and complete the Appalachian Trail from Harper’s Ferry, Virginia to Katadin, Maine,” said Morris.

Another opportunity for adventure began for Morris when he met a fellow traveler at a hostel in Harper’s Ferry.     Retired Lt. Col. Jack Tracy was biking the 400 mile GAP/C&O trail from Pittsburg to Washington. When they met at the hostel, Ron was treating his feet for soreness.Tracy pointed out to Ron that biking was a lot easier on the feet than hiking, and invited him to ride with him the next year.

In October of 2010, Ron purchased a bike and in June of 2011 made the first of five trips with Tracy on the Pittsburg to Washington journey.

“It is a great ride with no vehicle traffic for 400 miles and a lot of history to take in,” said Morris. “We have made a lot of friends along the way.”

Ron’s new friend and riding partner upped the ante for adventure when he contacted Ron and suggested they look into the Great Divide Trail.   Ron researched the ride and found that the Great Divide Mountain Bike Route is the longest road bicycling route in the world.   The trail begins in Banff, Canada and runs along the spine of the Continental Divide, 2,785 miles all the way down to Antelope Wells, New Mexico on the US/Mexican border.

Ron and Jack decided that with Jack’s bicycle maintenance experience and Ron’s camping experience, they would make a good team.   Ron began his adventure on July 22, 2012, and proceeded through 250 miles in Canada, all of Montana, a small portion of Idaho, and all of Wyoming, Colorado and New Mexico.

They rode 13 days straight, took a day off in Butte, Montana, and then rode for 33 straight days to the finish.

“We rode through many mountain passes up to 12,000 feet in elevation,” said Morris. “The riding was physically demanding, and I lost 20 pounds in the process. I found I had a renewed belief in the beauty of this country and the kindness of the people in those areas. They will go out of their way to help you.”

In 2013, Ron and Jack concocted yet another adventure, this time on America’s West Coast.

“In 2014 Jack and I rode the Pacific Coast route from Vancouver, British Columbia to Tijuana, Mexico,” Morris recalls. “ This ride was totally opposite from the Great Divide.   We shared roads with log trucks in Oregon and Washington and RV’s in California.   We averaged 65-75 miles daily with the Pacific Ocean in sight for 1000 miles of the 1,800 mile journey.”

Morris and his riding partner went sightseeing in San Francisco and San Diego, but really found the “wow” factor at the Giant Redwoods area in California.   The pair also traveled through beautiful areas such as Pebble Beach, Monterey, Venice, Malibu, Ventura and Oceanside.   One couple they met even invited them to stay in their home on a mountainside overlooking Santa Barbara.

“We met wonderful people along the way,” said Morris. “We were treated with kindness and with some envy that they couldn’t make the trip with us.”

This month, Morris is setting his thirst for adventure along the shores of Lake Champlain. Over a 13-day period, Ron and Jack will make their way up into Canada and will log about 1,000 miles.    Also, Ron is 14th on a wait list for a Mountain Bike Race in the Himalayan Mountains.  He has paid his fees and submitted the needed medical reports. If chosen, Ron will fly on September 27 to Dell, India, and then travel nine hours by train to the city of Shimla. The 400 mile course reaches altitudes of 14,000 feet.

Ron is also set to begin training in January for the National 24 Hour Challenge, which is slated to begin on June 20 of next year. What’s the challenge?  To ride as many miles as possible on a 100 mile, 23.5 mile and 7.5 mile course in a 24 hour period.

While many are content to let their dreams of adventure lie dormant, Ron Morris of Douglas is living his out in grand fashion.  Since purchasing his bicycle back in 2010, he has logged over 25,000 miles.

To the would-be adventurers who need a nudge to make their dream a reality, Morris says this, “ Don’t be afraid to go out and see the world. It is still a beautiful place.”