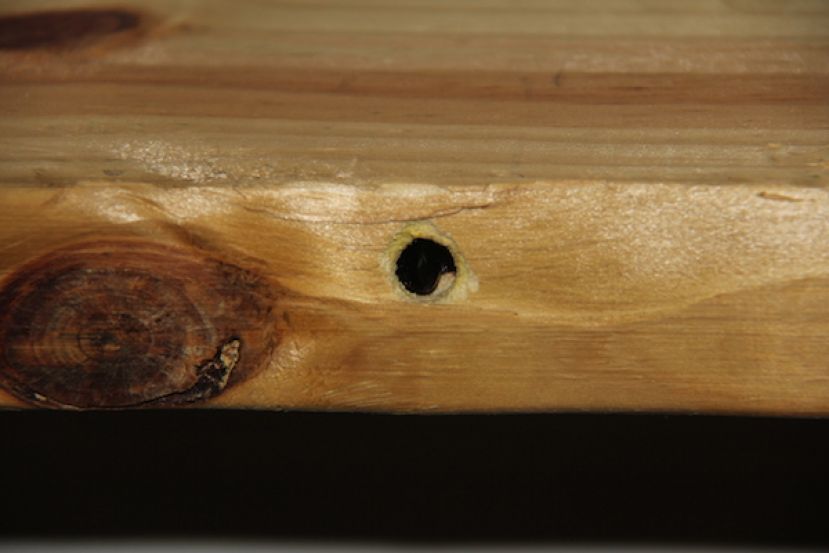 Submitted photo Tiny piles of sawdust found in random spots are likely caused by large wood-drilling insects called carpenter bees.They are large, black and yellow bees often seen flying around the wooden eaves of houses, wooden decks and wooden fences. They are often mistaken for bumblebees, but unlike bumblebees they have a black shiny tail section.

We used to try to hit them with baseball bats. A tennis racket would have been a better choice, but there were no tennis courts on our farm. We would also catch them going into their holes, plug the hole and listen to their angry reply. Carpenter bees were a lot of fun for growing boys.

Homeowners, though, usually aren't into fun things like that. They just want to get rid of these obnoxious bees. People who live in cedar-sided homes see no humor in them at all. It's about this time every year that people see large, black bees hovering around their heads and homes. They're probably carpenter bees. We get very little benefit in pollination from them. Carpenter bees resemble bumblebees but have a couple of noticeable differences. The upper surface of the carpenter bee's abdomen is bare, shiny and black while bumblebees have a hairy abdomen with at least some yellow markings. The other difference is where they nest. Bumblebees usually nest in the ground. Carpenter bees build their nests in tunnels they create in wood. They chew a perfectly round hole about the size of a dime, and sometimes larger than a nickel.

Male carpenter bees seem to be mean. But it's all an act. They'll hover in front of people who are near their nest, even dive-bombing occasionally. But the males are harmless. They don't have stingers. Female carpenter bees do have stingers, though, and their sting can be quite painful. Take it from me, who had to be stung several times before I learned to leave them alone. The females seldom sting unless they are handled or molested. Even if they don't sting, female carpenter bees aren't harmless. It's the fertilized females that excavate the tunnels and lay eggs in a series of small cells. They provision each cell with a ball of pollen, on which the larvae feed until emerging as adults in late summer. The adults will overwinter in abandoned nest tunnels to return again the next year.

Control is a combination of things. A fresh coat of oil-based paint is very effective. They don't like paint. Wood stains and preservatives are less reliable, but better than bare wood. Where the bees have already attacked, spraying insecticide on the wood surface won't work. You have to inject it into each burrow to be effective. An aerosol spray for wasp and bee control will work if you direct it into the hole. After a couple of days, go back and plug the hole with a piece of wood dowel coated with carpenter's glue, or use wood putty. This last step protects against future use of the old tunnel and reduces the chance of wood decay.

It's best to spray at night to kill the adults and the brood. If you spray during the day, the adults may be gone. And they may just start a new colony. Remember, the females can pop you pretty good, so treating towards sunset or at night, when the bees are less active, helps you, too. Or you could make it a two-person job and arm the other with the tennis racket.