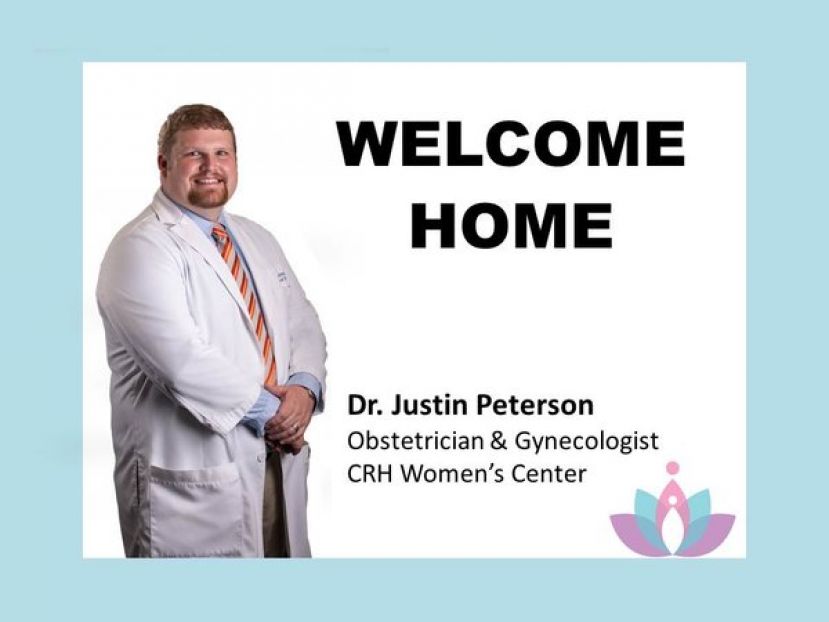 Home is a place that often shapes who we are and serves as the driving force of who we strive to become. Home is Broxton, Georgia for Dr. Justin Peterson. It was where he was raised and lived his entire life prior to leaving for college in 2006. Luckily for Coffee County, 12 years later, he has returned home, with a beautiful family and an impressive medical degree.  Coffee Regional Medical Center has hired Dr. Peterson to join CRH Women’s Center. He will begin seeing patients in late August.

After graduating from Citizens Christian Academy in 2006 as their Valedictorian & Star Student, Justin was accepted into Mercer University where he later graduated, once again with honors, with a Bachelor of Science in Biochemistry and Molecular Biology and a minor in Christianity.   He continued on to Mercer University School of Medicine where he graduated in 2014 with his Doctorate of Medicine. Dr. Peterson then completed a 4-year residency program at the Medical Center Navicent Health (affiliated with Mercer University School of Medicine). There, he focused on laparoscopic gynecological surgery, regular and high-risk obstetrics, urogynecology, and reproductive medicine.

The son of local retired restaurateurs, Wayne & Beverly Peterson, Dr. Peterson grew up in his parents’ restaurant, a local favorite, The Catfish House. They owned & operated the restaurant for 40 successful years before selling it in 2016 to retire. From the young age of 6, he can remember helping out around the restaurant with his sister, Kendra (Kight), as his parents worked hard to build one of the communities most popular dining options.  Wayne & Beverly raised their children to have a strong work ethic, which he attributes to his success in school. He fondly remembers returning from college for Christmas break and his mother promptly handing over the work apron.  When you have a family-owned restaurant the work is never done.

When asked why he chose to return to Coffee County, Dr. Peterson explained, “I have always had a passion for rural and underserved areas of healthcare.  Mercer was a perfect fit for me to receive my training because they train the physician with the mindset of serving rural areas of Georgia.  Coming back home to Coffee County is a natural fit for me and my family.  It’s an area that I can pursue my passions of hunting and fishing as well as being close to the hospital to provide excellent patient care.  I think that I bring a unique perspective to the field of medicine by growing up serving the people of Coffee County as well as the world.”

In addition to his medical degree, Dr. Peterson has returned with a beautiful family. His wife, Meredith, whom he met and married while in Macon, is from Charlotte, North Carolina. Together, they have a handsome young son, Hiram, who is 18 months old.  He is named after his late great-grandfather H.F. (Hiram) Sears of Pearson, Ga. Meredith was previously a high school teacher, at First Presbyterian Day School in Macon, but currently is blessed to stay home with their son. Meredith looks forward to being an active member of the community, alongside her husband.

With many interests & hobbies outside of work, Dr. Peterson will have plenty to keep himself busy when not serving his patients. In addition to spending time with his family, he enjoys hunting, fishing, baseball and football.  Lettering in varsity baseball all four years of his high school career at Citizens Christian Academy, Dr. Peterson knows a few things about baseball. He has also spent the past 6 years restoring a 1967 Ford Mustang.  The restoration is approximately 50% complete. With limited time during his medical residency, his family obligations and his new career ahead of him, he suggested that he may have to hire someone to complete the restoration. Another passion of Dr. Peterson is mission work. His mission work has taken him around the world, to exciting destinations including China, Kazakstan, Peru, and Nassau in addition to areas across the eastern United States. He served as the mission’s coordinator for the Wesley Foundation and Baptist Collegiate Ministries during college, teaching English, building churches, and repairing homes.  Once medically trained, he began teaching foreign physicians which included assisting them in setting up medical clinics in their home countries for them to work out of.