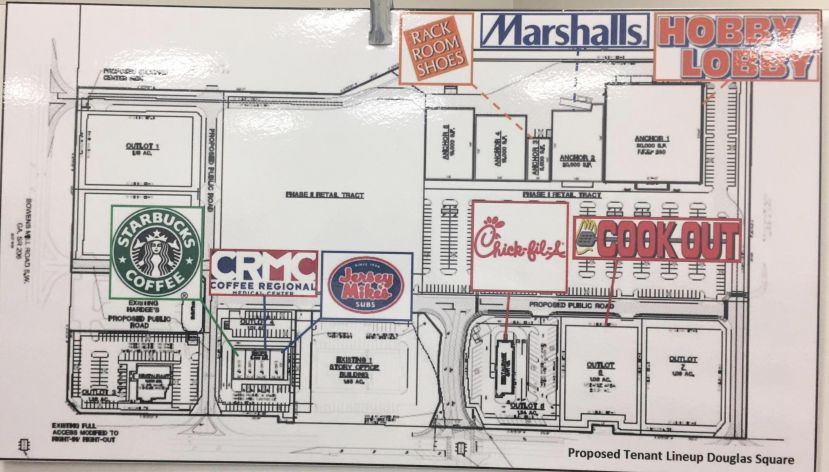 Greetings, citizens of Douglas!  I know a lot of you have heard or read about the great news for Douglas and Coffee County, but, before I go in to detail about the upcoming redevelopment project, I also have other fantastic news to share with you that affects our community.

Once again, our youth are standing out amongst their peers.  I will talk about the redevelopment after I congratulate Jane Ashley Rowell, who is an 8th grade student in Mrs. Teresa Holliday’s class at Citizens Christian Academy.  Miss Rowell is the daughter of Tony and Melissa Rowell and she won the state essay contest and went on to place 24th in the nation with her American Flag Essay.

Also, hats off to for Coffee Regional Medical Center EMS, who were recently named #1 EMS in the state for the year!  Job well done to everyone!

Coming up in May, the City of Douglas has partnered with local agencies and Unison Behavioral Health for a Community Mental Health Fair that will be held May 18, 2019 from 10am-2pm at Central Square Complex.  We want citizens and newcomers to Douglas and Coffee County to know that we care and we want to provide effective resources for people in crisis. Offering resources to persons in crisis is especially important in the healing process which includes assistance to person effected and their support system. Take the time to stop by Central Square Complex on May 18th.  You never know who may need the information that we are providing to the community.

Now, onto to what everyone is talking about!  The redevelopment of the old high school grounds.  This is going to be a great partnership with the development team.  The development team is excited to be part of the Douglas success story and look forward to bringing a great tenant lineup to the community. The first phase of this project will be the addition of Rack Room Shoes, Cook Out Restaurant, Jersey Mike’s Subs, Marshalls, Hobby Lobby, Starbucks, and Chick-Fil-A.  The project will also include a trail head for the popular Douglas Trail encouraging fitness in our community.  There will be improved lighting at the intersections for vehicle traffic and to aid drivers with better visibility at night. Work has already begun on the site with the demolition of the former Coffee County School Building. Construction is planned to start in the spring of 2020 with the store openings beginning as early as fall of 2020.

The development team is working with the City of Douglas to finalize details to make this project a reality. The developers are working with the local government on a finance structure that would allow a portion of the anticipated tax revenue generated by the development to be utilized to offset initial development cost. This structure is a win-win for the municipalities, citizens, as well as the developers. The municipalities get the benefit of additional taxes created by the redevelopment.  Citizens will see benefits from the creation of additional jobs, along with an improvement in lifestyle created by the more diverse dining and shopping experience, by only pledging a portion of the taxes generated by the development. Without this type of partnership, this type of project cannot happen.

As the Mayor of the City of Douglas, we have an opportunity that does not normally present itself to a city and county that is our size.  This opportunity could be the launching pad more major retail development in the city of Douglas. With that being said, grab a cup of coffee or bottled water, this is going to be a great editorial.

As a retired military tactical operations command supervisor, I love to name operations.  So, I will refer to this operation as “Operation Boom-Boom” because I think this development project has the opportunity to make the community retail market go “Boom-Boom”.  This project could be the project that attracts other nationally known businesses such as Olive Garden, Red Lobster, Longhorn, and Cracker Barrel to our smaller community. Now, that is just an example.  We are not talking to Olive Garden, Red Lobster, Longhorn, or Cracker Barrel. So, please, no rumors should be started about those businesses. Our community has to prove that nationally known businesses such as Rack Room Shoes, Cook Out Restaurant, Jersey Mike’s Subs, Marshalls, Hobby Lobby, Starbucks, and Chick-Fil-A can survive in smaller markets.  I know we can do this!

Currently, the developers have a letter of intent from Rack Room Shoes, Cook Out Restaurant, Jersey Mike’s Subs, Coffee Regional Medical Center, Marshalls, Hobby Lobby, Starbucks, and Chick-Fil-A, which will begin Phase 1 of the redevelopment.  The aforementioned businesses have agreed to locate in Douglas Square, if the citizens are willing to enter into a public-private partnership.

Here are my talking points:

The City of Douglas, EDA, Board of Education, Chamber of Commerce, Ambrose, Broxton, Nicholls, West Green, and County have put the developers in Douglas at the table to bring Rack Room Shoes, Cook Out Restaurant, Jersey Mike’s Subs, Coffee Regional Medical Center Urgent Care, Marshalls, Hobby Lobby, Starbucks, and Chick-Fil-A to our community.  As I mentioned previously, this decision is too big for elected officials.

In the near future, I will put out the numbers connected to “Operation Boom-Boom”.  As the Mayor, I promise to be straight forward with our citizens, at all times. We cannot not ask the State of Georgia to re-route Interstate 75 near Douglas to assist in attracting nationally known retail businesses. But, we have forward and progressive thinking leadership that creates opportunities for our community.  This opportunity is the result of the efforts of the combined leadership of our community. Our citizens have until November 2019 to educate themselves on Operation Boom-Boom and vote appropriately.

May God Continue to bless Coffee County and Go Trojans!

More in this category: « Poultry judging team preparing for next week’s competition Satilla Riverkeeper fishing tournament to be held on May 4 »
Login to post comments