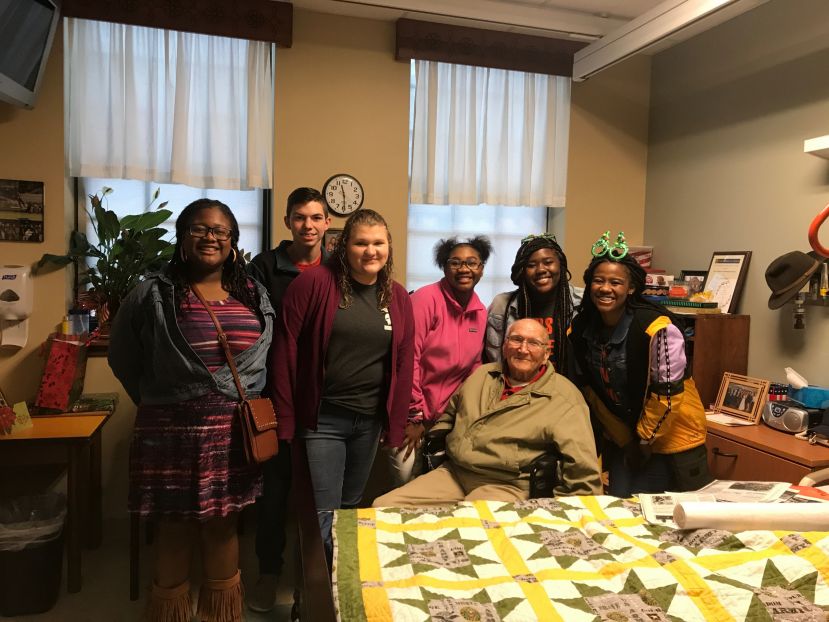 Recently, at George Washington Carver Freshman Campus (GWCFC) students were given a chance to do something remarkably life changing for those who have served for our country. A pep rally was held at GWCFC where four teams from the school competed with each other for the spirit stick. The tie breaker for the spirit stick was determined by the team who brought in the most items for "Operation: Veterans Care Package Drive." These items were delivered to the veterans hospital in Dublin.

The items for the veterans were collected in each team's box in the school's media center. After all of the items were put together into different care packages, Student Council, FCA, and F.L.Y. Girls were on their way to deliver these packages that were filled with letters of appreciation for everything our veterans have sacrificed for our country.

The students relished every moment of the trip. One of the students with Student Council, Gizele Faison, described her favorite part of doing these courteous deeds by stating, "When they received the gift, they smiled, and it made me just feel like a better person." Students visited a variety of veterans, including those from World War II. One of the veterans, Dr. Lester Porter, gave details on how he helped with the liberation of concentration camps. He can be described as "the man who gave history lessons with maps and articles."

Everyone who went to the veterans hospital in Dublin really enjoyed themselves, the veterans and each other. The veterans were exceptionally thankful for GWCFC going out of its way to show them a token of appreciation. This most definitely will not be GWCFC's last time showing gratitude to those deserving of it.