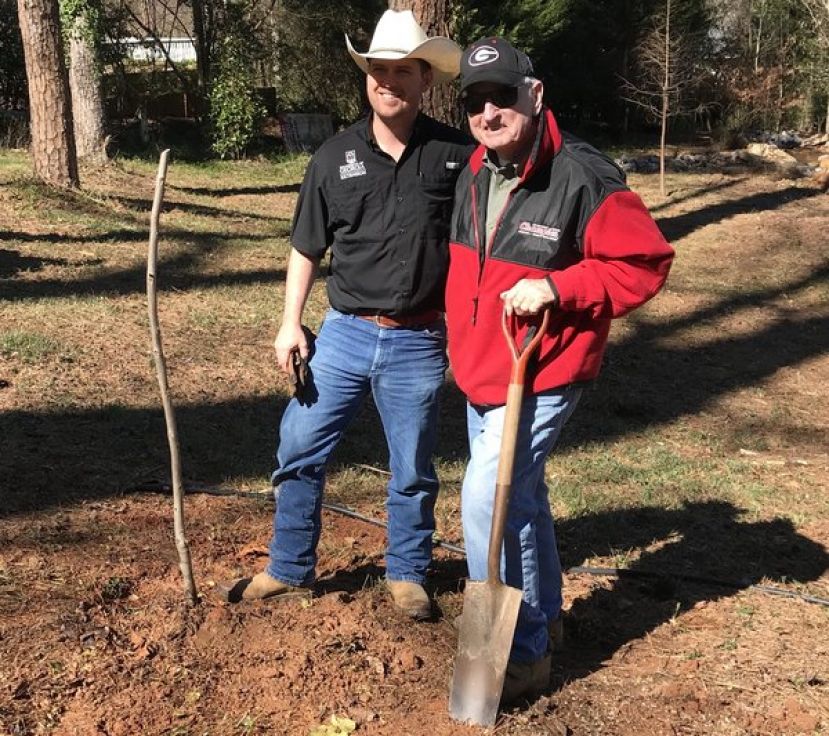 If you are like me, if someone mentions the words “Excel” or “Cape Fear,” pecan trees would be one of the last things to come to mind. However, according to Andrew Sawyer, area pecan agent with the University of Georgia Pecan Team, states that these two cultivars of pecan trees are found to be less susceptible to the dreaded scab disease that often plagues older pecan cultivars like the “Desirable.” Unfortunately, preventing and treating scab disease in pecan trees is very costly to pecan growers.

In 2008, the University of Georgia planted approximately seven different varieties of pecan trees at their research farm near Tifton in an attempt to discover and propagate cultivars of trees that were less susceptible to scab disease, the number one culprit in reducing pecan production in the state of Georgia. One of these cultivars was the “Excel” variety.

Sawyer, a Coffee County native, is the son of Tim and Carol Sawyer. He travels the entire southeast part of Georgia, covering approximately 42 counties as our Area Pecan Agent. Sponsored by the Georgia Pecan Growers Association, Sawyer and the entire University of Georgia Pecan Team make presentations to local county extension agents and pecan growers across the state about research findings, updates on pecan species, and new production practices. According to Sawyer, “The United States produces about 250 to 300 million pecans each year, which amounts to 80 percent of the total world crop. In the United States, 15 states produce pecans, with Georgia being the number one producer of pecans in the country. There are approximately 180,000 acres of pecan trees in the state.”

As part of the “Advancing Georgia Leaders in Agriculture and Forestry” Program, Georgia Pecan Growers Association Executive Director, Samantha McLeod, visited Vince Dooley’s house in Athens. During the visit, McLeod asked him if he had a pecan tree within his famous gardens. Dooley, the former University of Georgia head football coach, said that he did not but, “If you can get me some, I’ll plant them.” From there, McLeod knew exactly who to contact. For years, Nurseryman Chris Clough, of Clough Pecan Company, Inc., in Blackshear, has been cultivating species of pecan trees that are not at a great risk of obtaining scab disease, including the “Excel” variety. The University of Georgia Pecan Team slated our very own Coffee County native as the pecan agent just right for the job of delivering and planting two of Clough’s “Excel” pecan trees, as well as one species called “Cape Fear,” on Dooley’s property.

And it just so happened that Sawyer would deliver and plant the three very special trees on a very special day, Friday, February 14, 2020. It took Sawyer and the team from the Georgia Pecan Growers Association approximately one hour to plant the pecan trees and followed with a tutorial on how to prune the trees. As a token of appreciation, Dooley presented Sawyer and his team with Japanese maple seedlings from his very own gardens. Further, in a true showing of Southern hospitality, Dooley’s wife, Barbara, had prepared a soup lunch for the team, which they enjoyed on the porch of Dooley’s Athens home.

Of course, Dooley, one of the winningest coaches in the history of college football and a member of the College Football Hall of Fame since 1994, would not allow the visit to come to an end without showing off his massive collection of football and sports memorabilia. Dooley coached the University of Georgia Bulldogs for twenty-five years, leading them to one national championship and six SEC championships. But perhaps now, Coach Dooley’s greatest accomplishment will be considered the addition of his name to the list of pecan growers in the state of Georgia!