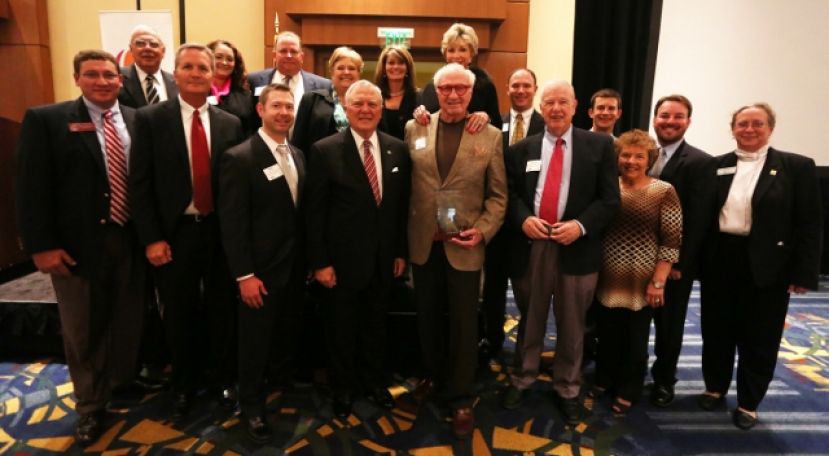 Local philanthropist and developer Francis Lott received the Georgia Economic Developers Association (GEDA) Volunteer of the Year award at the association’s November annual awards luncheon.  Governor Nathan Deal presented Lott with the award, which was offered in recognition of Lott’s outstanding contribution to the spirit of volunteerism and the economic development of Coffee County and the state of Georgia.  He is only one of two people in the state who have ever received the award more than once, taking home the award once before in 1995.

Lott has been involved as a Chamber and community volunteer since 1975, helping drive improved economic growth for the community, particularly in the recruitment of new industry.  While he had many options after graduating from Georgia Tech with a degree in Architecture, Francis chose to return home to his native Douglas because of his love for the community.

He has been actively involved in the recruitment of several industries, including Coats & Clark and TRW, which is now PCC Airfoils, resulting in over 700 jobs currently.

In the late 1970s, Lott was responsible for the first spec building built in Douglas to show industrial prospects. The community has gone on to build three spec buildings and is in the process of constructing a fourth building.

The JDC operates under the guidance of the EDA and its primary mission is to create and retain jobs in Coffee County.  The JDC meets quarterly and has identified committees to address an existing industry program and developing economic development partners throughout the world.

In 2004, after the local Belk department store abandoned downtown Douglas for a larger location, Lott completed the renovation/ conversion of the building to a mixed-use facility, renamed it The ATRIUM, and relocated Lott Properties offices there.

In 2012, Lott restored the bottom floor of the building to add an event center.

At the age of 77 in 2013, Lott decided to give two of the three floors of The Atrium to the Douglas-Coffee County Chamber of Commerce and Economic Development Authority and to personally design and outfit the new offices, located on the main floor of the building, himself.  After renovation, the two floors now owned by the Chamber and EDA are valued at $2.7 million.

“My goal was to make the offices outstanding and unique,” says Lott, whose passion for modern architecture and design is evident in the elements of the design. “I designed them in a contemporary style to pack a ‘wow’ factor and to demonstrate how progressive and forward-thinking our community is.”

-Submitted by the Douglas-Coffee County Chamber of Commerce