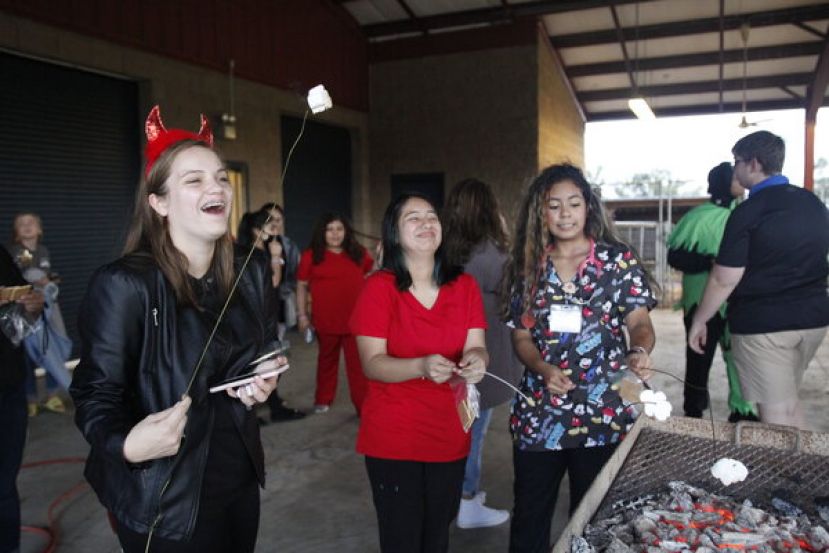 In celebration of Halloween, Coffee High Future Business Leaders of America (FBLA) joined forces with other CTSO organizations to host a joint Halloween Social.  FBLA, FCCLA, FFA, TSA, and HOSA attended. Members showed up dressed in their best Halloween attire in an effort to win the costume contest. Halloween costumes included zombified nurses and medics, cats, cows, jesters, pirates, a hot dog, and more. Among the costumes, a zombie costume worn by Ricardo Garcia and the jester costume worn by Josiah Brockington were most notable.

The evening started out with a hot dog grilled to perfection by Coffee High School's newest ag teacher, Mr. Drew Williams. For dessert, members participated in a very competitive version of musical chairs-and were rewarded with cookies and cupcakes.  Other competitive games that members enjoyed included a pumpkin decoration/carving contest won by Hannah Austin.

Members also enjoyed participating in Wrap-the-Mummy -- a timed, two-person contest with the object of the game being to cover your partner in toilet paper as quickly and accurately as possible. Aylin DeJesus and Cielo Cisneros were the mummy wrap winners. Towards the end of the night, members "socially distanced" around the makeshift bonfire to roast ghostly marshmallows and make s'mores. While it may have been different due to COVID, students still experienced a Halloween social that will be remembered.