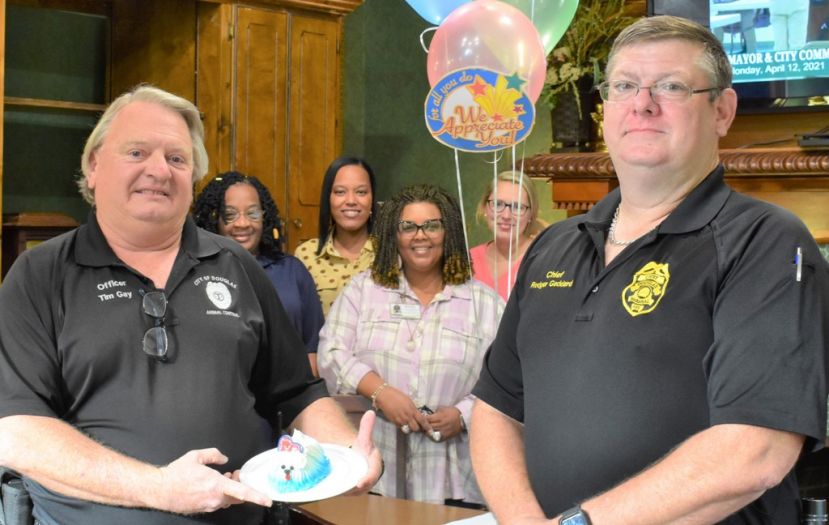 The week of April 11-17, 2021 is Animal Care and Control Appreciation Week.  The City of Douglas celebrated the importance of animal control on Friday, April 16, 2021 by hosting a small celebration for Douglas’s Animal Control Officer, Tim Gay.

“We appreciate all the hard work and long hours that Tim puts in each week to help with the needs of animals,” says Georgia Henderson, Community Development Director. “Tim is often called out to handle vicious dogs or cats and to pick up strays roaming the city. Some of his rescues are helpless animals and pets that have suffered injury, abuse, and neglect.  It takes a special type of person to take on this type of work for public safety and we thank him for his service.”

The Animal Control Division of the Community Development Department provides an essential community role of helping to educate the public on animal control ordinances which includes proper care of pets, enforcement of Douglas’ Animal Control Ordinances, and the protection of citizens from diseases such as rabies. The Animal Control officer has the power to enforce penalties on pet owners and confiscate the animals of owners who are in violation of the ordinance that addresses the care and shelter of pets.  The office also is responsible for the removal of domesticated animals within the city limits. Last year, animal control responded to 726 calls which included rescuing 267 puppies/dogs, 218 kittens/cats, the removal of 138 dead animals, and 103 miscellaneous calls.

More in this category: « AgSouth to distribute over 2.5 million to Douglas customers City to offer home ownership workshop on April 22 »
Login to post comments