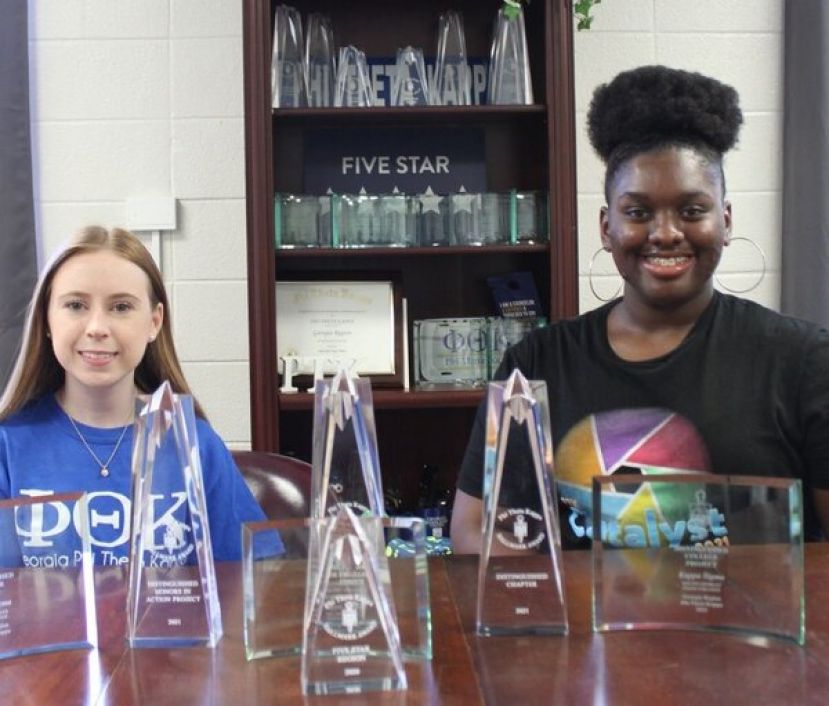 The South Georgia State College Phi Theta Kappa chapters, Kappa Sigma and Alpha Rho Omega, were honored with a host of awards at the honor society’s virtual international convention, Catalyst, during spring semester. The Kappa Sigma chapter won a Distinguished Honors in Action project award which was one of just 52 chapters out of a total of 1,300 Phi Theta Kappa chapters worldwide to be recognized. The chapter also earned a spot in the Top 100 chapters list, as well as a Distinguished Chapter recognition out of 27 chapters from the 1,300 chapters in Phi Theta Kappa.

Weeks earlier, the chapters earned several honors and awards during the virtual Georgia Spring Regional Conference hosted by Athens Technical College.  The Kappa Sigma chapter was awarded the highly coveted spot as the Most Distinguished Chapter in the Georgia Region. In addition, they were recognized with the Overall Distinguished College Project award led by chapter vice president Alana Atkinson and the Distinguished Honors in Action award for theme one: The Heir of Our Ways. The Alpha Rho Omega chapter was recognized with a Distinguished Honors in Action first runner-up award for theme six: Perceptions of Progress and Charles Daniels, chapter president, received honorable mention for Distinguished Chapter Officer.

Both chapters were recognized as Five Star Chapters. This is the highest level in the chapter development plan that can be attained. This is the eighth consecutive year for Alpha Rho Omega and the tenth consecutive year for Kappa Sigma. They also were presented with earning the designation as Reach Award chapters meaning they maintained or increased their membership rate by 15% or higher. Each chapter received Phi Theta Kappa graduation stoles for the members with this award. Chapter advisors, Amy Hancock, Ame Wilkerson and Alexandra Cardiel, received the Horizon Award for Chapter Advisors given to those advisors who have gone above and beyond for their chapters in the past year.

“Leadership, scholarship, fellowship and service are the four pillars of Phi Theta Kappa and the SGSC student scholars involved in our chapters strive to incorporate these at every level of their work,” says Amy Hancock, SGSC chapter advisor and Georgia Regional Coordinator. “The past year was a challenge with virtual meetings and having to complete the five-star plan in new and creative ways. These students met the challenges and succeeded. I am proud of the work that was done and excited they received the well-deserved recognition.”

Phi Theta Kappa Honor Society has been recognizing and encouraging excellence among community colleges since it was founded in 1918. Today, Phi Theta Kappa is the largest honor society in higher education with more than 3 million members and 1,275 chapters located in 50 states, U.S. territories, British Virgin Islands, Canada, Germany, UAE and the Republic of Palau. The recognition and scholarship opportunities that Phi Theta Kappa brings to an institution, its advisors, and most importantly to its student members are unparalleled by any other student organization.