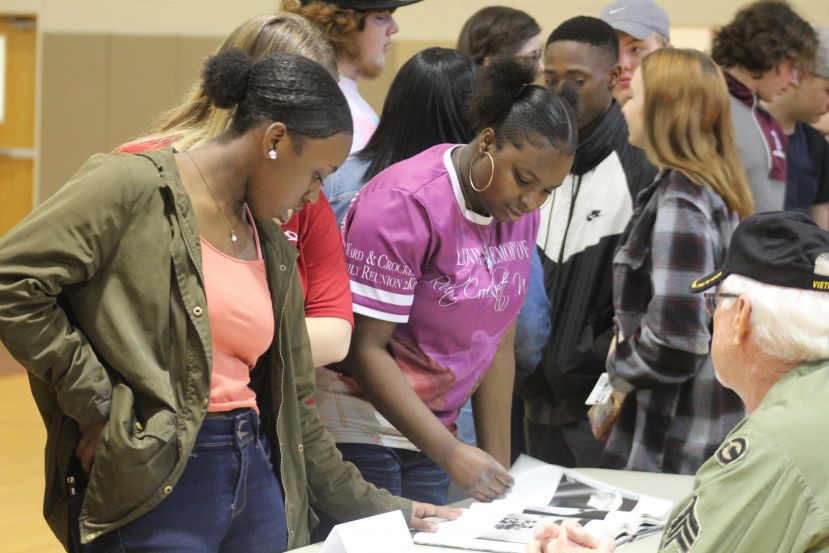 Recently George Washington Freshman Campus (GWCFC) hosted an interactive veterans museum, where students, faculty, and staff could go to listen and learn more about our veterans who served in the armed forces. There were a variety of veterans from all over, including those in the Douglas community and those who work at GWCFC. The veterans also brought memorabilia from their time in the military to share with students. The event helped create awareness, enthusiasm, respect for our nation, armed forces, and veterans.

Students learned that being in the armed forces is not just about going into combat. There are a variety of different jobs in the armed forces. Some of these jobs include: Office Assistant, Patient Specialist, and Musician. One of the veterans, Mr. Alvin Ricketson, described his first few years in the U.S. Navy as raising roaches, flies and mosquitoes. Mr. Mark Moore, who works at GWCFC, worked in administration while is the U.S. Army. Mr. Chris Papierz, a former Marine, spent four and a half years in service. The first year, he spent in infantry and three years overseas.

The armed forces provides many opportunities for its members to travel all over the world, experience a different way of living, and meet and connect with new people. When asked what was his favorite part of being in the Marine Corps, Papierz responded with, "Oh, that's hard because I enjoyed every moment overseas ... I got to see so much ... the statue of David, the Leaning Tower of Pisa, Mona Lisa ... there are so many different things that you can see and you live and you learn..."

Another extremely outstanding feature at the museum was Mr. Sergio Alvarez who is in the National Guard. The reason why he can be described as outstanding is because he is just a high school senior at Coffee High School, who is already starting off his military career so early in life. To be able to do this, he went to a training program during the summer of his junior year. He is now finishing his schooling and doing AIT, Advanced Individual Training. Alavarez stated "If there is no teamwork, there is no Army." He plans to attend college, and then after college, he will spend twenty years in the Army.