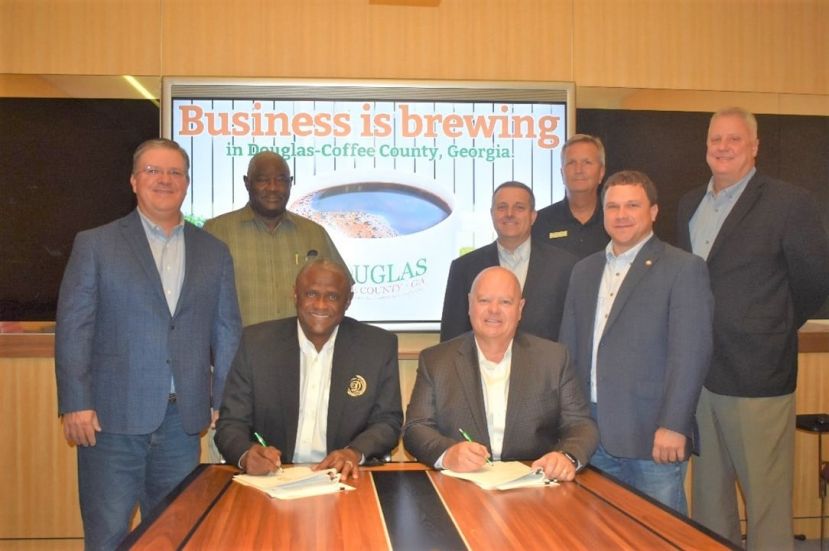 Pilgrim's Pride is building a new facility in Douglas. The facility will manufacture pet food by using chicken byproducts and further connects this vital industry to the Douglas-Coffee County community. With this new facility, every component of Pilgrim's operations will be located in Coffee County – from hatching eggs to producing feed, growing and processing chickens, and, ultimately, utilizing the byproducts of the processed birds.

The City of Douglas and the Douglas Coffee County Chamber and Economic Development Authority announced the expansion of Pilgrim’s Pride Corporation’s complex in the City of Douglas. Pilgrim’s, an American-based food company that processes, prepares, packages, and delivers fresh, frozen, and value-added food products for customers in more than 100 countries, will invest $75 million in an expansion in Douglas, Georgia. The expansion will create 53 new permanent, good-paying jobs, as well as dozens of construction and trade jobs during development of the facility.

“I am excited for the continued investment that Pilgrim’s is making in this community. With this investment, this makes Pilgrim’s a fully integrated operation – hatchery, growth houses, kill facility, feed mill, and now the pet food ingredient operations,” said Douglas Mayor Tony Paulk. “This expansion will create better-paying jobs for our citizens. Better-paying jobs create a better quality of life. This is a great day for our community.”

Pilgrim’s already has a significant presence in Georgia, employing more than 8,000 people and paying local growers more than $152 million each year to support its facilities in the state. An important contributor to the Georgia economy, Pilgrim’s has an annual payroll in Georgia of more than $440 million and contributed nearly $270 million in capital investments over the last five years.

The Douglas-Coffee County Economic Development Board President, Stuart Smith honored the announcement by saying, “Douglas and Coffee County has long been associated with the poultry industry. We are excited that we can continue the association with Pilgrim’s and this project. Pilgrim’s is the top industry employer in our community and their continued investment and faith in this community is further evidence that we have a great relationship with them. This is an excellent opportunity to provide additional employment opportunities for the residents of Douglas and we are looking forward to the success of this new project.”

Locally, Pilgrim’s employs over 800 at their current Douglas complex, in addition to having over 90 growers across Coffee County. Pilgrim’s annual payroll in Douglas exceeds $27 million.

“The poultry industry is very important to the State of Georgia. Likewise, poultry is very important to Douglas, Coffee County, and the region, and Pilgrim’s play a very vital part in this. We are very excited about this expansion here in Douglas. The economic impact of a $75 million investment is huge for this community and the state of Georgia” said Georgia State Representative Clay Pirkle.

“We have come a long way since the 2009-10 time frame. Project Racao (name for this project) started with a multiagency (City of Douglas, Coffee County, and EDA) visit to a similar plant in Iowa in November 2020. Now, with the announcement of this addition, Pilgrim’s is a fully integrated part of our community. Pilgrim’s is very important to our community. Anytime we can create opportunities for our citizens, support farmers, support industry, and improvement the quality of life, it is a good day,” stated City of Douglas City Manager Charles Davis.

"Today is a great day for Coffee County with Pilgrim's announcement that they are expanding in Douglas—generating millions of dollars in economic impact and creating high-quality jobs in the process. Their investment will support the local community for generations to come and allow our state’s important poultry industry to continue to thrive. I look forward to seeing this project’s continued growth and success in South Georgia for many years to come," said District 7 State Senator Tyler Harper.

Pilgrim’s is the anchor for dozens of rural communities—operating more than 30 meat, poultry, and prepared foods facilities and employing more than 31,000 people in the U.S. Pilgrim’s is committed to being a model corporate citizen and an active member in the communities where their team members live and work. One example of Pilgrim’s commitment to giving back is the Hometown Strong initiative. Since the program’s inception, Pilgrim’s has contributed over $3.4 million to the betterment of Georgia communities where the company’s team members live and work, including a $350,000 contribution to the City of Douglas for a new water tower.

A groundbreaking ceremony was held on Tuesday, May 3, 2022 for the expansion. Several local, county, and state legislators were in attendance to congratulate Pilgrim's on the expansion and the benefits it will bring to the local economy.