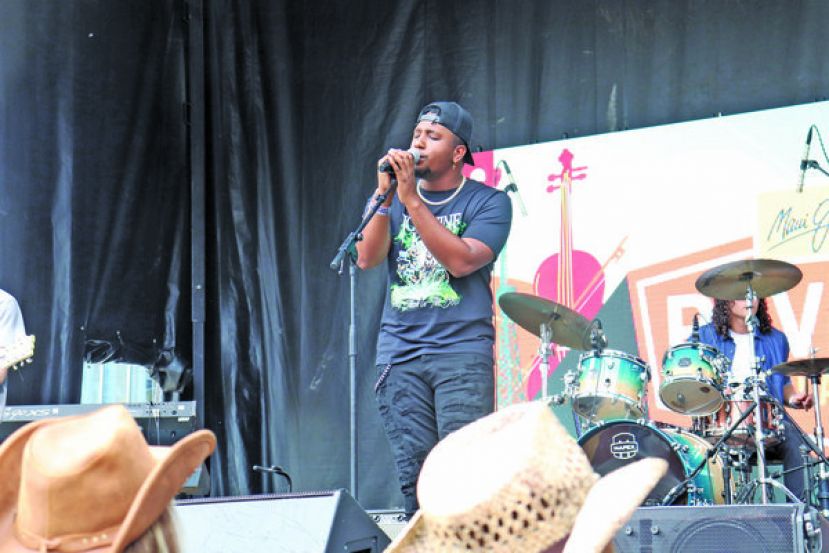 Every child dreams of making it big one day. Every kid in the world has at one point or another had visions of grandeur and of them becoming the next big star. For a Willacoochee native, that dream is coming true.

Willacoochee and Atkinson County were represented in a big way this past week as former Willacoochee resident and an Honor Graduate from the Atkinson County Class of 2016 Clint Johnson performed live at the annual CMA Fest that is held each year in Nashville, TN. CMA Fest is the longest-running country music festival in the world with over 80,000 in attendance annually.

Johnson, who performs under the stage name Rvshvd (pronounced Rashad)  moved with his girlfriend, Angel Rewis, to Tennessee last year in attempt to really make his dream come true. Growing up in rural Atkinson County, Johnson was like any other child; he wanted to be a star.

“When I was in 4th grade, we got to watch the Like Mike VHS," said Johnson. "At the beginning of that, they played the Lil' Bow Wow music video and I knew then that this is what I wanted to do when I grew up."

From then on, Johnson would pursue music for the rest of his younger years.

"For Christmas when I was 12, my mama got me an mp3 player," said Johnson. "I played around with it and discovered that it had a recording feature. I would go to the library and take a blank CD, download a bunch of instrumental rap songs, put them on the CD, take them back home and play them on the CD or DVD player. I would put one head phone in front of the speaker, and rap into the other one. I did that for a little while until I saved up enough money for a microphone."

After working with his father and saving up his money for a little while, Johnson bought his first microphone, and things kept growing from there. At first, Johnson was focused on a budding rap career, and never really considered a future in country music, because as he put it, "I never really liked it."

"My dad was always playing country music, and I didn't like it. One day, a Keith Urban song, 'Sweet Thing' came on and made me realize that country music wasn't that bad. That's when I got into country. Not that much, but a little bit. I just liked that song I guess. One day, while at work with my mama, we could watch TV while waiting on the bus to come. I would flip back and to between VH1 and MTV. One day I stopped on CMT and something hit. That's when I really decided to like it. In 2017 I decided to write me a country song since I never had before. A friend told me that I needed to make an EP. I made one and put it out and got a big reaction. Writing country music was easier because that's who I am. I didn't have to fake that."

Johnson would go on to graduate from Atkinson County High School with honors in 2016, and then attended ABAC in Tifton from 2016-2020. Johnson was studying to be a music journalist, but the demand in that field was so low that he decided to build on his regional success and move to Tennessee to try and further his career.

Once the move was complete. Rvshvd (Johnson,) would get opportunity after opportunity. He capitalized on them in May of 2020 when he signed his name to a record deal with EMPIRE Records.

Johnson was asked why he performed under the name Rvshvd, and why he spelled it so differently.

"Rashad is my middle name," said Johnson. "I just always liked my middle name more than my first name. In 2018, I was sitting with my girlfriend, Angel Rewis in her dorm room, and she suggested that I change my performance name. I did need to change it because it was something silly before. We decided to go with Rashad, but there were too many around. I played around with turning the 'S' into a dollar sign, but that was silly. Angel suggested turning the 'A' upside down and making it a 'v,' and we did. You don't see many country artists with a different name like that. I almost just went under 'Clint Johnson,' but you don't see many country artists with a different name, so I stuck with Rvshvd."

Johnson was also asked about how it felt to be able to perform at the CMA Fest, and what keeps him motivated. Johnson replied: “It felt good. This is something that I have been working towards for a long time. To be recognized by the Country Music Association is dope. Like, at this point it ain't about just making TikToks, and making YouTubes of covers or anything, this is my job and I finally get to do what I love. One thing that keeps me motivated is that this field ain't promised. It don't matter how much work you put in, one day something can go wrong and you can lose it all. My girlfriend keeps me motivated to plan a future together with her. I work hard for my parents to give them the best. I'm very introverted. I stay to myself and don't talk that much. Music allows me to say what I want to say."

When asked what advice he had for any other person with dreams of becoming a musician, Johnson stated: "Nothing is impossible. You've got to do what you want to do. Don't try to please other people. Don't do what everybody else wants you to do. At the end of the day everybody is going to have an opinion, but the only one that matters is yours.”

Rvshvd currently has several singles available online, and had been featured in songs with other artists such as Colt Ford, Dan Tyminski, Trey Lewis, Cooper Allen, and the legendary Vince Gill. He is working on releasing an official EP and is currently featured on all platforms that you can stream music on. You can also find him on his TikTok account @itsrashad, on YouTube @itsRVSHVD, and Instagram @itsrvshvd.

Rvshvd is the son of Michael and Patricia Johnson of Willacoochee.