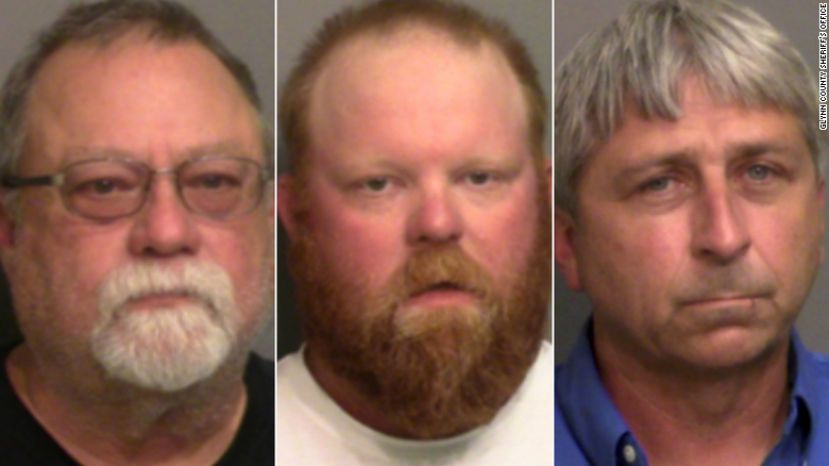 All three defendants were convicted at trial in February 2022 on multiple counts, including one count of using violence to intimidate and interfere with Arbery because of his race and because he was using a public street. All three defendants were also found guilty of attempting to kidnap Arbery by chasing after him in their trucks in an attempt to capture and confine him. Finally, Travis McMichael was found guilty of using, carrying, brandishing, and discharging a Remington shotgun in the course of the hate crime, which added 10 years to his life sentence; and Gregory McMichael was found guilty of using, carrying and brandishing a .357 Magnum revolver, which added seven years to his life sentence.

“The Justice Department’s prosecution of this case and the court’s sentences today make clear that hate crimes have no place in our country, and that the Department will be unrelenting in our efforts to hold accountable those who perpetrate them,” said Attorney General Merrick B. Garland. “Protecting civil rights and combatting white supremacist violence was a founding purpose of the Justice Department, and one that we will continue to pursue with the urgency it demands.”

“It was important that this murder was prosecuted for what it was—a brutal and abhorrent racially-motivated hate crime,” said Assistant Attorney General Kristen Clarke of the Justice Department's Civil Rights Division. “Ahmaud Arbery should be alive today. The tragic murder of Mr. Arbery reminds us that hate-fueled violence targeting Black people remains a modern-day threat in our country, and we must use every tool available to hold perpetrators accountable. We hope that this sentencing ends one painful chapter for the family of Ahmaud Arbery, the Brunswick community and the nation as a whole.”

“Those who commit hate crimes target what makes us who we are as Americans, striking at the very heart of our society,” said FBI Director Christopher Wray. “This is why combatting hate crimes and protecting civil rights are top priorities for the FBI. We will continue to fulfill our mission, working with our partners to investigate these acts of hatred and violence, and protecting the American people.”

“These substantial sentences should deliver a sense of finality and closure to an exceptionally tragic chapter in the Southern District of Georgia,” said U.S. Attorney David H. Estes for the Southern District of Georgia. “Even as the family and friends of Ahmaud Arbery continue to mourn his horrific and needless murder, we can find hope for our community’s future in the cooperative work of our law enforcement partners and prosecutors who brought these men to justice for their hateful crimes.”

Evidence at trial revealed that on Feb. 23, 2020, defendants Travis and Gregory McMichael armed themselves with firearms and chased after Arbery as he ran past their driveway. The pursuit passed by the home of defendant Roddie Bryan, who got into his own truck and joined the chase, despite the fact that he did not know and had never before seen Arbery. For the next four to five minutes, the three defendants pursued Arbery through the neighborhood, trying to box him in with their trucks. For that entire time, Arbery ran from the defendants, unarmed and with his hands in plain view. He never spoke a word to the defendants, and never made any threatening sound or gesture; rather, he repeatedly tried to run away. Ultimately, after Arbery had already changed direction multiple times, trying to escape from the defendants, Travis McMichael got out of his truck and pointed a shotgun directly at Arbery. When Arbery tried to defend himself, Travis McMichael shot him in the chest. Arbery, wounded, grabbed for the gun. During a struggle over the gun, Travis McMichael fired two more shots into Arbery, who then stumbled a few steps and fell face-first onto the pavement, where he died in the street.

Evidence at trial revealed that the defendants had strongly held racist beliefs that led them to make assumptions and decisions about Arbery that they would not have made if Arbery were white.

Travis McMichael’s social media comments and text messages to friends, offered as exhibits at trial, showed that Travis harbored racial animus against Black people, whom he described at points as “sub-human savages” who “ruin everything”; the social media comments also revealed that Travis had for many years associated Black people with criminality and had expressed a desire to see Black people — particularly those he viewed as criminals — harmed or killed.

Witnesses testified at trial about deeply racist comments Gregory McMichael had made to people he barely knew.  One witness testified about a brief encounter she had with Gregory in a professional capacity, during which she commented that it was “too bad” that Julian Bond, a Black Georgia civil rights leader, had recently passed away; Gregory angrily responded that he wished Bond had “been put in the ground years ago” and that Bond and “those Blacks” were “nothing but trouble.” According to the witness, Gregory then went on a five-minute rant about Black people.

The jury also saw racist text messages from Roddie Bryan.  When Bryan learned, just four days before the shooting, that his daughter was dating a Black man, Bryan referred to the boyfriend as a “ni----” and a “monkey.” In other messages on social media, Bryan also referred to other Black people using racial slurs. When the police spoke to Bryan about Arbery’s death, he admitted that he had never seen or heard anything about Arbery before; when he saw a Black man being chased, his “instinct” told him that the man must be a thief, or maybe had shot someone.

At trial, the jury found that the evidence proved beyond a reasonable doubt that race formed a but-for cause of the defendants’ actions on Feb. 23, 2020—meaning that, but-for Arbery being Black, the defendants would not have assumed he was a criminal, chased him down, and shot him.

This case was investigated by both the Georgia Bureau of Investigation and the FBI, and was prosecuted by Assistant U.S. Attorney Tara Lyons of the Southern District of Georgia, and Deputy Chief Bobbi Bernstein and Special Litigation Counsel Christopher J. Perras of the Civil Rights Division.