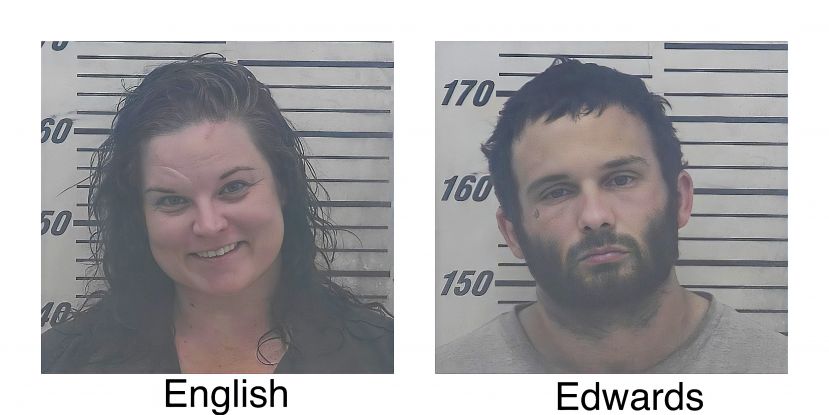 Devin Cole Edwards and Stephanie Amanda English, both of Douglas, have been charged with trafficking methamphetamine following a search at their residence. While being transported to the jail, English allegedly managed to slip out of her handcuffs and consume suspected marijuana in the patrol car.

According to a report by the Coffee County Drug Unit, on August 11, detectives conducted a traffic stop on a vehicle with individuals involved in an ongoing investigation for a cracked windshield and failure to maintain lane violation.

When the vehicle was pulled over, the investigators reported smelling "the odor of marijuana coming from inside the vehicle," leading to a search of the car.

The report states that investigators discovered a quantity of methamphetamine inside the automobile, which was driven by English, with Edwards said to be in the passenger seat.

Both English and Edwards were arrested and transported to the Coffee County Jail.

As English was being transported to the jail, she allegedly "slipped out" of the handcuffs placed on her wrists, and then "consume an unknown amount of what appeared to be marijuana."

After English and Edwards were booked into the Coffee County Jail, detectives executed a search warrant on their residence, located on Shiloh Road in Douglas. During the search, detectives reportedly located a quantity of methamphetamine and two digital scales in the couple's bedroom.

According to a copy of English and Edward's warrants, detectives discovered 233.32 grams of methamphetamine, which they are  accused of intending to "sell/deliver."

The warrant also states that two scales were discovered inside the home.

According to documents filed in the Superior Court of Coffee County, this is Edward's third possession of methamphetamine offense since 2016.