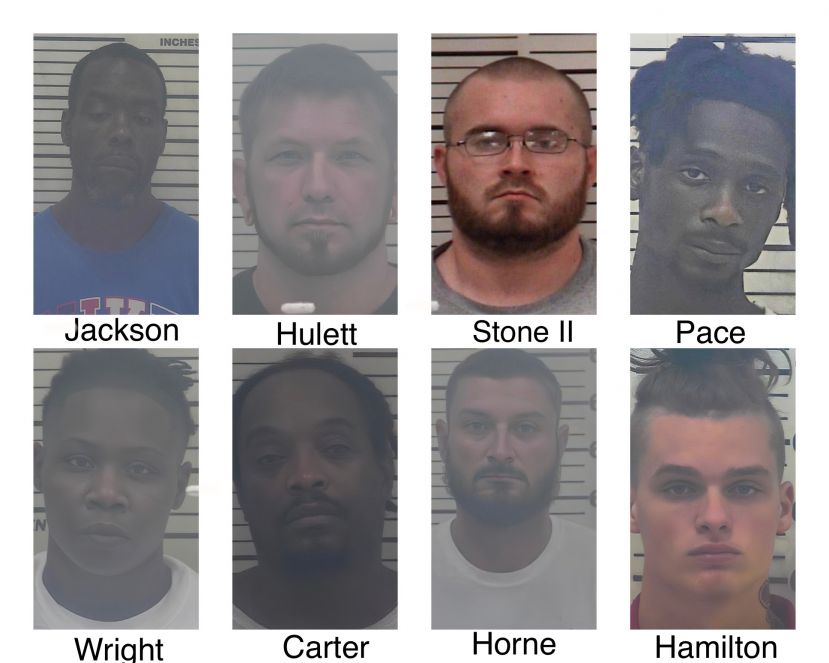 Several people were released from the Coffee County Jail this week following bond hearings, where many defendants with pending charges appeared before Judge Andy Spivey. Several interesting statements were made during the hearings, including a man attempting to list a victim's address as the home he would reside in if granted bond. Many other individuals who recently made local headlines were also granted and denied release.

The proceedings took place on Wednesday in the Superior Court of Coffee County, with local prosecutors, defense attorneys, and Judge Andy Spivey hearing several bond motions on over 35 individuals seeking to be released from jail. A few individuals also pleaded guilty and were sentenced on their charges.

One of the individuals granted a bond, Jarmal Jackson, made local news last month after a video was posted on social media showing him allegedly assaulting another individual.

On August 1, DouglasNow posted the video, which shows Jackson, a convicted felon also referred to as "Chris Rock," appearing to choke a man in the front seat of a car. In the video, Jackson and the man discuss the victim "coming through," and Jackson is seen grabbing the victim around the neck and choking him. Throughout the incident, Jackson makes several comments to the victim, including threatening to "put him to sleep." Jackson also commented on the posted video, saying he was "just playing," with the victim responding and disagreeing with Jackson's statement.

During Jackson's hearing, Judge Spivey asked Assistant District Attorney Morgan Kirkland to "give him details" of the incident that led to the charges. Kirkland gave a summary of the case and also mentioned Jackson's criminal history. Kirkland told Judge Spivey a video had been shared on social media showing Jackson choking the victim. She explained that the video was turned over to local authorities, who charged Jackson with aggravated assault.

Jackson's attorney, Jared Roberts, responded that he had seen the video and said it could be viewed as "horseplay" and felt like "nothing was there."

While speaking to the judge, Jackson stated that the victim allegedly "stayed with his brother." However, Judge Spivey told Jackson that if he were to be released on a bond, he was not allowed to contact or be around the victim.

Judge Spivey granted Jackson a $10,000 bond, with other conditions, including a no-contact order with the victim.

According to an official with the Coffee County Sheriff's Office, Jackson was released on Wednesday.

Wright is charged with aggravated assault after allegedly assaulting a female with a handgun on November 1, 2021. She was denied bond in December 2021, with her attorney filing a second motion in July 2022. The bond was set at $25,000.

Stone was arrested in February 2021 after he "did an immoral and indecent act to a minor female under the age of 4 and did cause physical injuries to the said child." He has been incarcerated at the Coffee County Jail since.

Judge Spivey told Stone that due to the case not being indicted within 90 days, he was required to grant him a bond. However, when Stone was asked where he would live when released, Assistant District Attorney John Rumker informed the judge that a minor child was living at the residence he had given.

Rumker also told the judge the case was set to be indicted next month.

While speaking to Stone, Judge Spivey stated, "I don't care where you will live, and I am required to give a bond, so I have to. But you are to have no contact with any minor child whatsoever, including your own. If you have to live in a tent to avoid a minor child, then that's what you'll have to do."

Stone's bond was set at $50,000. As of Friday morning, Stone was still in the Coffee County Jail.

An 18-year-old charged multiple times in separate cases in Atkinson and Coffee counties this summer, Ashton Hamilton, will remain behind bars after receiving a bond on his most recent charge. Hamilton was previously charged with a string of burglaries in Atkinson County, then received similar charges in Douglas just a week later. He has since been denied bond in both cases. Last month while in jail, Hamilton, along with other inmates, was charged with aggravated assault after he allegedly attacked another inmate after the man sprayed his feces on the individuals.

After being briefed on the incident that led to the charge, Judge Spivey told Hamilton he would be giving him an O.R. bond, a bail at no cost, on the assault charge. When the judge asked Hamilton if he "knew what that meant," Hamilton shook his head no.

"Well, it means I am giving you a bond you don't even have to pay a cent toward. If you assaulted a man with a broom handle after he sprayed his feces on you, well - I'm not saying it's right, but I am giving you an O.R. bond for this charge," Judge Spivey stated.

However, Hamilton will remain in the Coffee County Jail on his other pending charges as he awaits prosecution.

Many individuals who have recently made local headlines were denied bond Wednesday, including a man, Joseph Horne, said to be responsible for the Amber Alert on a local child reported missing last month. In a twist of events, the mother of the child who also reported the child missing testified on Horne's behalf.

The mother told the judge, "it should have never gone that far" regarding the Amber Alert being released. After the comment, Solicitor Katy Paulk addressed the woman and stated, "It shouldn't have gone that far? So, you were ringing everyone's phones trying to get your child brought back home after reporting that he had been taken, but now it should not have gone that far?"

The woman responded, "I didn't ask for the Amber Alert; I just wanted my child home."

When Judge Spivey asked the woman if she "told Horne that she wanted her kid home," she replied that she attempted to call Horne, but "he did not answer."

According to documents online, Horne also has a criminal history in Florida. He has served time in prison on at least three occasions, recently being released in March.

Latisha Brockington, who was arrested after she allegedly shot at another female on May 29, appeared before Judge Spivey for the third time seeking a bond. Brockington was denied release in the Superior Court of Coffee County shortly after her arrest and again last month. Brockington's attorney told the judge she had no criminal history and was the "perfect candidate" for a bond. However, Judge Spivey denied the motion due to her "presenting a significant danger and/or threat to persons, property, and/or the community."

Carter was taken into custody in June on charges of aggravated assault, kidnapping, obstructing, or hindering a person making an emergency telephone call. A DPD report accused Carter of allegedly forcing a woman to take him to an ATM and cutting her with a knife.

When the judge asked Carter where he would live if given a bond, he gave the judge the address he resided with the victim before his arrest.

Judge Spivey denied the bond, and Carter remains in the Coffee County Jail. Court documents also show several prior charges for Carter in California and Michigan for assault and robbery, with him being a registered sex offender in Michigan.

Pace was charged in July after he allegedly assaulted his girlfriend with a hammer. Court documents revealed that Pace has been charged numerous times and was on bond at the time of his arrest following drug possession charges last year. That case is still pending.

Another defendant from a recent case, Steve Sellers, who was arrested for reportedly burning a pile of his girlfriend's clothes in a fire near her front porch, will also remain in jail awaiting trial. Sellers was also accused of stealing two of her TVs on the same day.

Cory Hulett will continue to be held on his charges until his case is prosecuted or resolved in the Superior Court of Coffee County after being denied bond. Hulett was arrested on July 14 after an individual reported that he had allegedly sent a 14-year-old female "inappropriate messages." The reporting sergeant referred to the messages as "sexual" in the incident report, with the victim saying the content of the messages "made her uncomfortable." The minor also accused Hulett of engaging in "some physical contact that made her uncomfortable."

A few individuals listed on the calendar pleaded guilty to their pending charges, including Zamrarion Pope. Pope was charged earlier this year in connection to many local thefts and unlawful vehicle entries. After the crimes, Coffee County deputies observed a "suspicious" vehicle leaving the area where the thefts occurred. When they attempted to make contact with the car, the driver fled the scene and crashed the vehicle after a brief pursuit. The driver, later identified as Pope, fled on foot into a wooded area near Clyde Kirkland Road.

Pope, age 17, was apprehended shortly after and arrested on four counts of entering an automobile.

Following his guilty plea, Judge Spivey sentenced him to ten years probation, restitution to the victims in the case, and to complete the Residential Substance Abuse Program (RSAP).

A man arrested in July 2020, Billy Ray Taylor, on an aggravated assault charge has now been banished from parts of Southeast Georgia after pleading guilty to his charges. As a part of the deal, Taylor will no longer be able to reside in Pearson and will also serve the next ten years on probation.

Taylor was arrested after witnesses reported that Taylor had pointed a rifle at a female at the home and fled the scene. He was later apprehended and charged with two counts of aggravated assault.

Criminal trials will occur next week in the Superior Court of Coffee County. At this time, Michael Clark, charged with aggravated assault and home invasion, is the only defendant whose trial has been set for next week. DouglasNow will announce the trials when they are scheduled and publish details following the verdicts of each case.