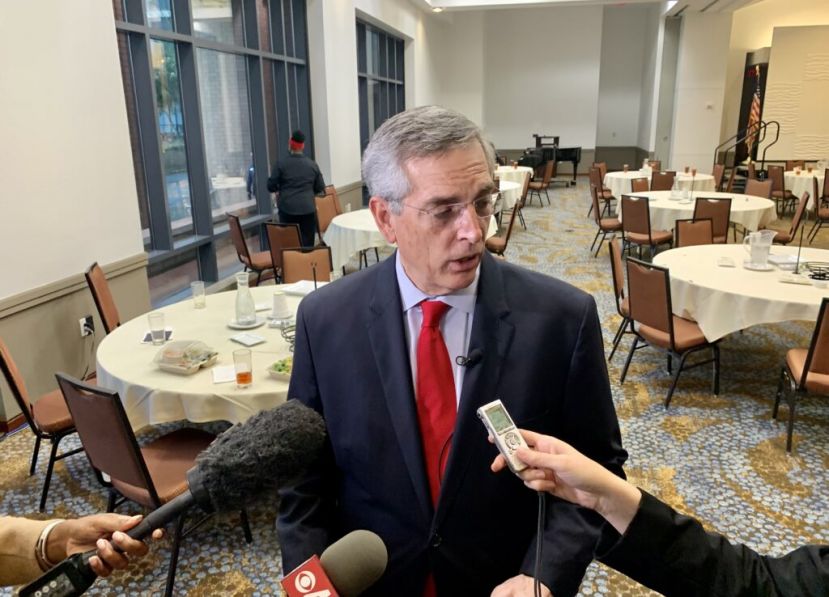 Reprinted from The Georgia Recorder

A plaintiff in a lawsuit challenging the state’s electronic voting system is being subpoenaed by Georgia Secretary of State Brad Raffensperger and the State Election Board for information that would include her communication with reporters.

A subpoena filed Monday in U.S. District Court of Northern Georgia requests Marilyn Marks, executive director of Coalition for Good Governance, to provide every email, text message, details of conversation and any other documents about the unauthorized access of Coffee County’s voting system, including communication she’s had with the media. Marks and a First Amendment advocacy organization accused the state of trying to intimidate reporters and sources from reporting on potentially serious misconduct of some local Coffee election officials scheming with a team of computer forensic experts and Donald Trump loyalists to gain access to sensitive election files in attempt to discredit President Joe Biden’s narrow 2020 election victory in Georgia.

Marks said she believes she is being targeted by the state because she was on the March 2021 call that led to the news breaking this year of a breach of the Coffee County voting system and has been outspoken in her criticism of the state’s handling of the investigation. Marks is a critic of the state’s use of Dominion Voting Systems ballot-marking machines that critics say are less secure than hand-marked paper ballots.

Marks noted that she is the first person in this case that the state has subpoenaed despite the state election board and secretary of state’s office having been aware of allegations before releasing the recording in February of a phone conversation she had in which Atlanta bails bondsman Scott Hall described chartering a flight to Coffee County to “scan every freaking ballot.”

And long before Marks released the Hall call, the secretary of state’s office began an investigation into Coffee County election operations in December 2021.

The report of the breach gained national attention when it was first reported by the Washington Post earlier this year and it mushroomed since then with multiple news outlets reporting new information. Court documents reveal Hall’s connection to former Trump attorney Sidney Powell and other Trump affiliated lawyers who solicited the help of Atlanta-based forensic data firm SullivanStrickler to copy election systems in Georgia, Nevada, and Michigan, battleground states where Biden defeated Trump in the November 2020 election.

“Well, after 18 months of doing nothing, the SOS, and St. Elec. Board attorneys have finally issued their first subpoena in the very troubling case of the GA voting system breach! To whom? Any of these characters? https://t.co/BOxgfWr8Ub”

“They served it this afternoon,” Marks tweeted on Monday evening. “They want all the research I’ve done on Coffee, and all my communications with the press!! They don’t like the press learning these facts, and what reporters have been writing about Coffee and the voting system breach!”

“It’s disturbing to see the secretary of state engaged in a fishing expedition for emails between reporters and a source,” said Richard T. Griffiths, a spokesman and president emeritus for the Georgia First Amendment Foundation.

“Generally, this appears to be an effort to punish the disclosure of what could be misconduct in an election process, and it appears to curtail the release of information that in the future would have a very chilling effect on reporters using email to communicate with potential sources,” Griffiths said. “The fact is that it’s in the reporter’s interest to figure out what went on in Coffee County by digging down and talking to sources.”

In addition, the subpoena asks Marks to produce documents related to Dominion’s machines and the Coffee case that pertain to a string of witnesses that have been subpoenaed by the plaintiffs in the suit. That list includes Hall, Powell, former Coffee County Election Supervisor Misty Hampton, and ex-Coffee County GOP Chairwoman Cathy Latham, who the plaintiff’s attorneys accuse of facilitating the Jan. 7, 2021, visit to the elections office.

Attorney Bruce Brown, who is representing the Coalition in the lawsuit, said the state election board and secretary of state likely swept the Coffee breach under the rug without this lawsuit.

“If it weren’t for the hard work of the Plaintiffs in this case over the past months none of the facts relating to the Coffee County breach would have ever come to light. The Secretary of State and the State Election Board – despite their statements to the court and to the press to the contrary – have shown no interest in investigating this unprecedented breach or bringing those responsible to justice,” Brown said. “Instead of doing so, they are now harassing the plaintiffs – the people who have been doing their investigative work for them – and trying to hide the fruits of our investigation from the citizens. This is completely unacceptable.  If they cannot do their job, then at least they can get out of our way.”

There are other recent instances of reporters becoming the target of a Georgia case involving election interference. The Atlanta Journal-Constitution reported in July that a Fulton County special grand jury investigating potential criminal interference by Trump allies had subpoenaed the news outlet to provide audio recordings of a leaked January 2021 conference call.

The Atlanta news outlet also vowed to fight a subpoena expected to be issued to political reporter Greg Bluestein over his reporting on a scheme to cast alternative votes for Trump cast by Republican fake electors following the 2020 presidential election.

Before the flurry of unfounded claims of widespread voter fraud that followed Trump’s 2020 election defeat, the suit filed in 2017 challenged the state’s investment in new voting equipment that relies on bar codes and electronic equipment to record ballots.

Hampton played a key role in the state’s initial investigation after she posted a YouTube video in 2020 claiming that the Dominion system was easily hackable, while a sticky note containing the password was visible in the background. Hampton and some local election board members were also accused of discrediting voting machines after a recount failed to accurately reflect the same results from Election Day.

The state election officials removed the county’s election server and main scanner workstation in June 2021, a month after a newly hired Coffee County election director notified the state that the password no longer worked. He said that near the computer Hampton had used he found business cards with the name of the founder of Cyber Ninjas, the firm behind the shoddy audit of Arizona’s Maricopa County in its administration of the 2020 presidential election.

In addition, Germany contacted Coffee County’s attorneys, who were aware of Hall’s allegations and were investigating them. Earlier this month, the Georgia Bureau of Investigation announced it was assisting the state elections office in the case.

“Because we believed that a forensic evaluation would greatly assist in determining truth from falsity in these claims prior to interviewing witnesses (some of whom who have made numerous allegations regarding the 2020 election in Georgia that have not turned out to be supported by the facts), we determined that we would bring in the consulting expert in this case to assist in the forensic inspection of the server,” Germany said.