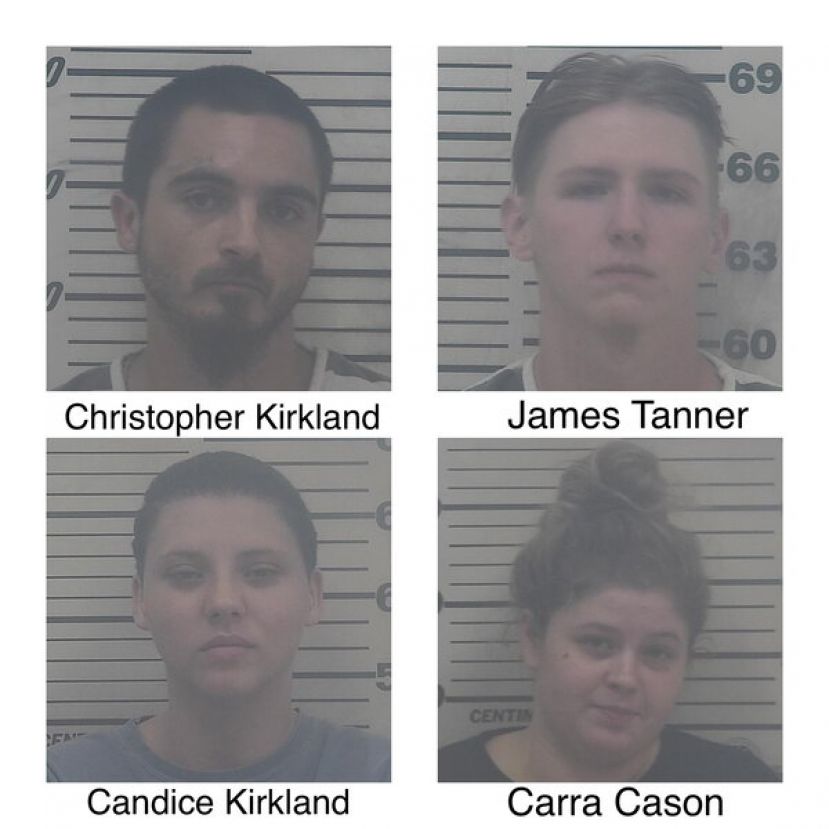 A doomed love triangle resulted in an alleged beating with a metal pipe and four individuals in jail on aggravated battery charges. The attack, according to the victim, was a set-up by Candice Kirkland, a woman he claimed to have an affair with while she was engaged to one of his alleged assailants, James Tanner.

According to a copy of a Coffee County Sheriff's Office Report, on September 26, a deputy was dispatched to Coffee Regional Medical Center to speak with a man who claimed to been beaten by two people. When the deputy arrived, he spoke with a 21-year-old male from Douglas who said that he was at the hospital because he was jumped by two guys in a set-up by an ex-girlfriend.

The victim said that he lived with a 20-year-old Candice Kirkland, 20, and her fiance, 22-year-old James Tanner, for around two months after moving in with them in March. He said he began to have an affair with Candice while he was there but that Tanner was aware of their relationship. According to the victim, his relationship with Candice ended before the assault occurred.

The victim said Candice picked him up around 12:45 a.m. on September 26 and drove him to a house on Cobblestone Road in Douglas. He claimed that when he entered a room in the back of the house, Tanner and Christopher Kirkland, 24, jumped him. He claimed Christopher "used a metal pipe to beat him and threatened to kill him with the pipe."

The deputy read Facebook messages between the victim and Candice, which showed her asking the victim if he was okay following the assault. One of the messages reportedly showed Candice also claiming she was unaware that Tanner and Christopher were going to attack him. However, the deputy stated that many of the messages had been unsent, making them invisible. The victim also stated that another female, later identified as 22-year-old Carra Cason, was driving the vehicle in which Candice had picked him up.

The deputy noticed several injuries on the victim, including a disfigured and bruised finger, a swollen and disfigured elbow, red marks on his upper left arm, and blood on another finger.

The deputy, along with three other officers, went to the Jasmine Drive residence where the suspects were said to be living. When they arrived, a man at the door informed them that Candice, Christopher, and Tanner were all inside the house and consented for them to enter. All suspects, including Cason, who was also at the property, were apprehended.

Christopher is the only suspect who has yet to be released; the other three were granted property bonds on September 29.